Mahatma Gandhi’s central messages on women’s rights, the environment, animal rights and sexuality, continue to “challenge us, disturb us and shake us out of our complacency,” Michael Kirby has told a capacity audience at UNSW’s Gandhi Oration. 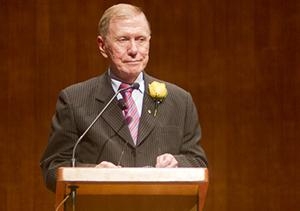 The central messages from the life of Mahatma Gandhi continue to challenge us and Australians can learn much from the Father of India on women’s rights, animal rights, climate change and sexuality, Michael Kirby has told a UNSW audience.

Addressing the topic “What Would Gandhi Do Today?” Michael Kirby said the Mahatma’s central messages continue to “challenge us… disturb us and …shake us out of our complacency”.

“Against the profoundly patriarchal world of the years of his political activism in India, Gandhi stood both for the rights to equality of women, rights for the ‘untouchables’ and a willingness to dialogue about sex in a way that was distinctly unusual for the time; unusual both for its mention and its message. He enjoyed confrontation and he thrived on dissent,” Kirby said.

Yet at the same time the Mahatma was “fallible, paradoxical, annoying, sometimes inconsistent and often puzzling, as all human beings are. We cannot endorse today all of his ideas, taken literally. But he did not expect, nor did he want, us to do so.”

On women’s rights, Kirby said despite women constituting half of humanity, everywhere they “suffer discrimination and disadvantage inflicted upon them by laws, customs and cultural rules, overwhelmingly made by men”.

The recent case in the Indian capital New Delhi, in which a young woman died after being allegedly gang raped by five male passengers on a bus shows that much is still to be done to prevent violence against women.

“Gandhi’s high intelligence would, I believe have sent his mind searching for the kinds of solutions to the endemic problem that greets a woman (and some men) so that they are treated as little more than a sexual object: to be used, invaded and then discarded as a thing or object. “

Kirby said one of the problems Gandhi may have identified was the imbalance in the global sex ratio caused by the modern practice of sex selection, which if it continues, “will add to the overall dangers faced by women”.

On climate change, Kirby said while the environmental movement was yet to be established during Gandhi’s lifetime, his ethical principles carried lessons concerning desirable limits of growth; the needs for greater simplicity and self-discipline by human beings; and the necessity to view all living things as entitled to human respect.

On animal rights, Kirby said modern society can “learn from Gandhi to respect and protect the other sentient creatures that share the planet with us”.

“In my childhood in Australia, chicken was a rare treat, reserved to Christmas. Now it is a huge industry. Those most sociable of animals, poultry, are subject to mass corporatised slaughter on an assembly line or they are kept in tiny confines for egg production.  If you ever want to see a sight like Belsen [a Nazis concentration camp], in the midst of our society, go to a chicken slaughter farm, as I once did.”

Kirby said where Gandhi perhaps displayed the most paradox was on the subject of human sexuality. An avid proponent of chastity, Gandhi often referred to his own celibacy and was outspoken about his abhorrence of sex.

“His instruction on sex seems other-worldly and disconnected with the reality of most peoples’ lives,” Kirby said.

Yet while Gandhi, by his own account, terminated his sexual relations with his wife, there was ample evidence he went on to cultivate a “most intense and loving” relationship” with the young male German architect Hermann Kallenbach, during his 20 years living in South Africa.

“The exact nature of the relationship is contested,” Kirby said. “Suggestions that it was ‘clearly homoerotic’, although not homosexual, caused an outcry in India.  It was condemned as an insult to the Father of the Nation. Why that should be so is unclear given that many famous people have been homosexual.

“What would Gandhi say today of this subject? What would he say with the scientific knowledge we how have? I suggest that he would remind us of his words: ‘Love and truth are faces of the same coin, both very difficult to practise, and the only things worth living for’.”

The annual Gandhi Oration was established by UNSW and the Australia India Institute.

A video of the event will be available soon.

What is going on with India’s weather?

Opinion: why not sell India uranium?