Gifted education: are we up for the challenge?

Bob Carr reflected on his own challenging school experiences in his opening address to a gifted education conference at UNSW. 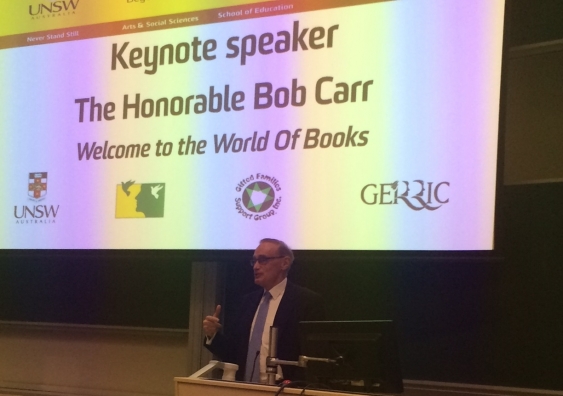 Bob Carr delivers the keynote address on the opening day of the National Gifted Conference at UNSW. Photo: Sophia Campion

As Bob Carr delivered the keynote address on the opening morning of the Australian Association for Education of the Gifted and Talented (AAEGT) National Gifted Conference at the University of New South Wales (UNSW) on Thursday, he kept returning to the concept of challenge.

The former NSW Premier and Foreign Minister recalled his second year at the then new Matraville High School when a teacher carefully explained to the class that verbs were “doing words”, leaving all his classmates wondering “Why is he telling us this? We learned it years ago.”

“I can’t think of anything sadder than youngsters in a classroom having a teacher announce the things you’re going to do and thinking ‘Oh no, don’t they know we already know that’,” said Professor Carr, whose talk was titled “Welcome to the world of books”.

Professor Carr’s high school experience improved immeasurably when his Year 10 English teacher Doris Allen introduced him to the great works of literature, bringing in boxes of books by the likes of George Orwell, Aldous Huxley, Jane Austen, Virginia Woolf and Evelyn Waugh and urging her students to take them home and wake up an hour earlier to make time in their day for reading.

“It meant reading difficult adult books one after the other and it was precisely the kind of stimulus I was eager for … If I hadn’t had a Doris Allen saying ‘I’m going to stretch you, I’m going to challenge you, here is a slew of books, get through it’, I would have felt morose and under-challenged,” he said.

“I think of that gifted youngster in the classroom who is thinking with despair ‘Oh no, not things I already know. Where’s the challenge in this?’.”

The conference, being hosted by the UNSW School of Education in partnership with the AAEGT and Gifted Families Support Group Inc (GFSG Inc), began with AAEGT Vice-President Melinda Gindy telling the audience that of the estimated 3.7 million children enrolled in Australian schools, about 375,000 of them – 10 per cent – qualified as gifted.

“That’s 375,000 children who think differently, who process differently … they deserve to have their needs met on a full-time basis, not just at chess club on a Wednesday afternoon or in school holiday programs,” she said.

This view was reiterated by Professor Carr who said he didn’t want gifted students to feel cheated or to feel lost in the system. “We lose them if we talk down to them, we lose them if we don’t challenge them,” he said.

Professor Carr is now the director of the think tank the Australia-China Relations Institute (ACRI) and drew on that role to highlight the challenges Australia faces in fostering its relationship with China.

“All of a sudden the most important relationship, and the one that determines our living standards, is with a country very different to ourselves,” he said. “Are we smart enough, are we gifted enough to rise to this challenge?” 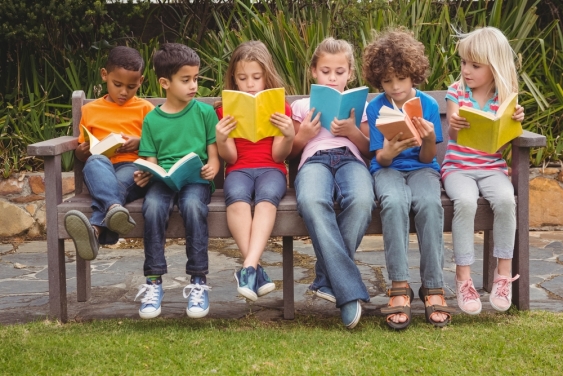 Perhaps not, if a report commissioned by the ACRI is any guide. It found that of the 4000 Australian students studying Mandarin in Year 12 in 2015, only 400 were from non-Chinese backgrounds.

“This doesn’t strike me as a nation that is using its talent very smartly. We rely on communicating with China, on assessing China, on negotiating with China in the Chinese language from Chinese families who happen to have come here,” Professor Carr said. “Learning Mandarin is too tough for Australians in the Australian school system.”

He contrasted this with the immersion system used in some American schools where subjects were taught exclusively in Mandarin to help students master this difficult language.

“The fact that we haven’t got people from non-Chinese backgrounds in serious numbers studying the language here says something to me about how Australia may not be rising to the challenge,” he said.

Professor Carr, who graduated from UNSW with an Honours degree in History, urged universities to offer a course introducing students to great books, similar to courses in the United States and advocated by the writer and film critic David Denby.

Denby wrote the best-seller Great Books after returning to Columbia University in his 40s and spending two semesters intensively studying Homer's Iliad and Odyssey, Plato’s Republic, and Aristotle’s Nicomachean Ethics among other classic works of literature.

Professor Carr said he realised he had become lazy in his own reading and ended up turning to challenging books as respite from the job of Premier. “Football on a Saturday afternoon didn’t do it for me. I found that in my 50s I could get away from my job by picking up books that had been too hard for me earlier,” he said.

Professor Carr concluded by urging Australia to elevate scholars to the same level as the nation’s sporting heroes.

“Sporting heroes are wonderful people and they deserve to be applauded but I think about how much I’d like to see parades and streamers for a youngster who masters a subject and who, in a working-class household without any great gifts or advantages in life, says ‘I’m going to sit at that desk and get on top of this subject’ ... We all ought to be there mobilised to cheer that youngster on and to see that he or she is challenged until they can be challenged no more and they walk out of their education determined to do something great and keep this country where it ought to be.”

The conference continues until Saturday. See the full program here.

Read more about the challenges of gifted education here.