Finding stable housing is one of the biggest challenges facing prison leavers. Access to public housing flattens the curve on recidivism. 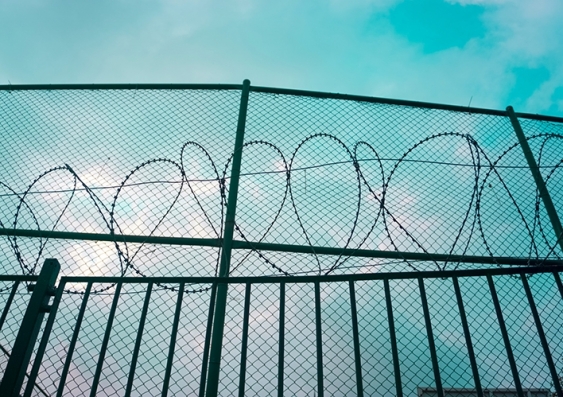 Most people exiting prison in Australia either expect to be homeless, or don’t know where they will be staying when released. Photo: Shutterstock

“Going home” is a classic metaphor for exiting prison. But most people exiting prison in Australia either expect to be homeless, or don’t know where they will be staying when released.

Our recent research for AHURI (the Australian Housing and Urban Research Institute) shows post-release housing assistance is a potentially powerful lever in arresting the imprisonment–homelessness cycle.

We found ex-prisoners who get public housing have significantly better criminal justice outcomes than those who receive private rental assistance only.

The benefit, in dollars terms, of public housing outweighs the cost.

Read more: Putting a stop to the revolving door between homelessness and imprisonment

People in prison often contend with:

People with such complex support needs are often deemed “too difficult” for community-based support services and so end up entangled in the criminal justice system.

Also, prisons are themselves places of stress and suffering. So people leaving prison a high-needs group for housing assistance and support.

There are about 43,000 people in prison in Australia. Over the year there will be even more prison releases (because some people exit and enter multiple times).

According to the latest published data:

Over the past decade, imprisonment rates in Australia have been rising.

We must turn both those trends around.

In our research, we investigated the effect of public housing on post-release pathways. We analysed data about a sample of people with complex support needs who had been in prison in NSW.

On a range of measures, the public housing group had better criminal justice outcomes.

The charts below compare the number of police incidents for each group.

The first chart shows recorded police incidents for the private rental assistance group, which gradually rose over the period for which we have data. 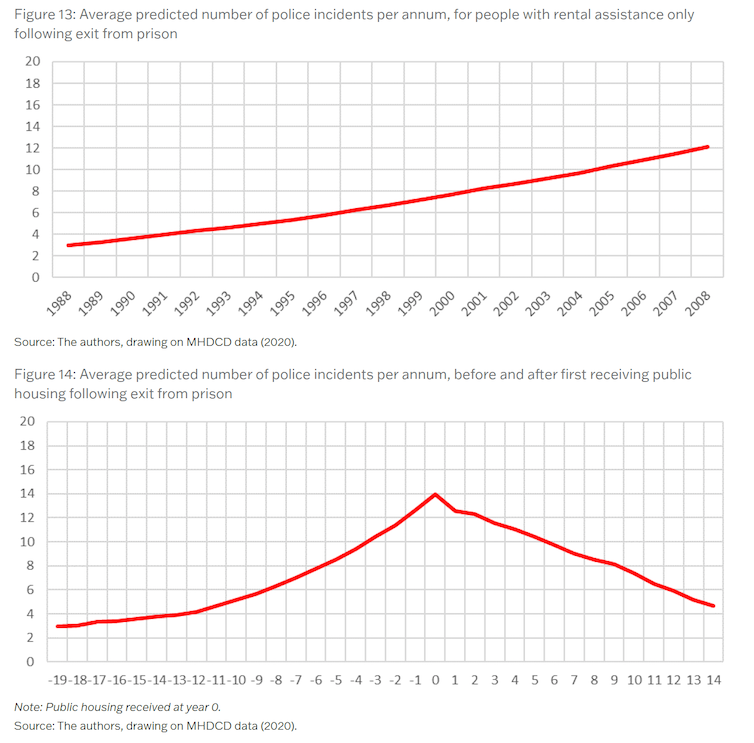 For the housed group:

When we put a dollar value on these benefits, providing a public housing tenancy is less costly than paying Rent Assistance in private rental (net benefit $5,000) or assisting through Specialist Homelessness Services (net benefit $35,000).

We interviewed corrections officers, reintegration support workers, housing workers, and people who had been in prison, across three states.

They were unanimous: there is a dearth of housing options for people exiting prison.

A Tasmanian ex-prisoner, who lived in a roof-top tent on his car on release, said:

You basically get kicked out the door and kicked in the guts and they say, ‘Go do whatever you need to do, see ya’.

Planning for release is often last-minute. A NSW reintegration support worker told us:

A housing worker in Victoria described those next steps as a series of unstable, short-term arrangements, beset by pitfalls:

They could easily be waiting a couple of years, realistically. And for them that’s a long time, and so far off in the distance it’s difficult to conceive of. And a long time in which for things could go wrong in their lives – to be homeless or back in prison, all sorts of things … What they do in the meantime: they couch surf, stay with family, stay in motels, stay in cars/stolen cars, stay with friends, sleep rough, all those things.

A Tasmanian corrections officer told us:

People want to come back to custody because they’ve then got a roof over their head. They don’t have to worry; they’re getting fed, they can stay warm.

It’s not just about housing support

Community sector organisations specialising in supporting people in contact with the criminal justice system, such as the Community Restorative Centre (CRC) in NSW, do extraordinary work providing services and support that aim to break entrenched cycles of disadvantage and imprisonment.

However, this sector’s funding has been turbulent, marked by short-term programs.

In another project by some members of this research team, we saw the difference CRC made to 275 of its clients over a number of years. This evaluation found supported clients had 63% fewer custody episodes than a comparison group – a net cost saving to government of $10-16 million.

These support services would be even more effective if clients had more stable housing. As it is, specialist alcohol and other drug case workers are often spending their time dealing with clients’ housing crises.

Secure, affordable public housing is an anchor for people exiting prison as they work to build lives outside of the criminal justice system.

It is also a stable base from which to receive and engage with support services. It pays to invest in both.