The stories of Greek-Australian immigrants are in danger of being lost. We talk to a historian determined to preserve them. 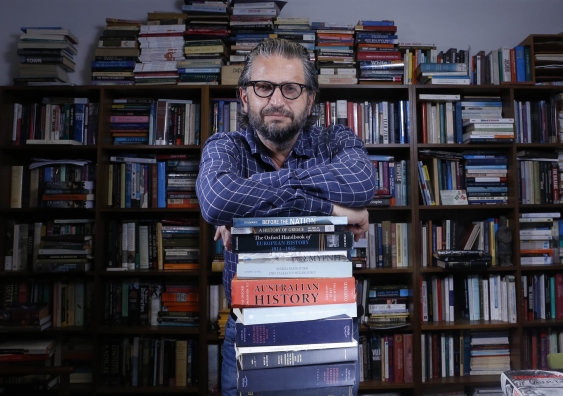 When Associate Professor Nicholas Doumanis was told Greek newspapers in Australia were surviving on obituaries, it dawned on him that the last links to this rich part of Australia’s history were fast disappearing.

Greeks began migrating to Australia from the early days, with the largest wave coming after World War II. But while the history of their pre-war migration has been well documented, Doumanis saw that there was a gap in post-war history.

“This history is not of much interest to Greeks in Greece, and Australian historians don’t really know what to make of it,” says Doumanis, from the School of Humanities & Languages in the Faculty of Arts & Social Sciences.

“It’s left to us Greek-Australians to actually start to think about what our history is and to take it seriously. I want to make sure [our immigrant] stories are preserved and their history is understood.”

Thanks to an agreement between UNSW and the State Library of NSW, Doumanis is now working on a Greek-Australian history archive that will preserve this history. The archival collection will consist of letters, postcards, home movies and other documents curated by and held at the State Library. There will also be an oral history archive, featuring interviews with about 200 people, and eventually a book and a permanent online exhibition.

When they paid off their house they would continue saving to buy something else. They bought into the Australian dream and they moulded it.

Much has been written about the problems faced by Greeks who made the move here, including poverty, social difficulties and xenophobia.

But where, asks Doumanis, is discussion about the success stories? “I don’t mean those who came here to establish big businesses, I mean ordinary people who came here to find security and ended up developing new lives in this country and setting down roots.”

Many of those who arrived during the 1950s and '60s, usually by ship and often with little more than a suitcase, came from small villages without cars or electricity. They settled into working-class suburbs and began toiling in factories and shops. Within a short space of time they had bought their own homes, raised their families, set up businesses – the ubiquitous Greek milk bar or corner shop – and were regularly sending money to their villages back home.

“Australia was socially difficult but they found it could give them something if they worked hard,” Doumanis says. “A lot of them would work two or three jobs in the beginning. The abundance of gainful employment made a big difference, and housing was relatively cheap. When they paid off their house they would continue saving to buy something else. They bought into the Australian dream and they moulded it.”

One of the project’s major aims, he says, is to learn about the experience of migration from the inside, to better understand what it was like to build a new life, find a niche in Australian society and to take advantage of its opportunities, particularly in education and business.

“If you are going to talk about migration you have to talk to migrants,” he says.

One thing Doumanis has already found is that life in Australia drove big social changes within the Greek community. “Women go out to work, match-making disappears, divorce isn’t as difficult because people can disappear into suburbia, inheritance traditions change so that things are divided equally,” Doumanis says.

When they returned to visit family in Greece, these migrants didn’t realise how much Australia had changed them. “You do become something different and I think on the whole it’s quite positive. There’s something good about migration,” Doumanis says.

The State Library hopes this project will become a template for archives of other ethnic groups in Australia. But first, Doumanis needs funds to kick-start the project, particularly recording the oral histories.

“Each of them will be asked about their aspirations and their stories,” he says. “What made them come to Australia? What did they expect to achieve? What happened on the first day they arrived? What was their first job? Why did they stay?”