Opinion Green but not happy to pay

OPINION: Beyond composting the kitchen scraps and making sure the bottles and paper go in the yellow bin, most of us are reluctant to pay the real price of our profligate lifestyles, writes Jenny Stewart. 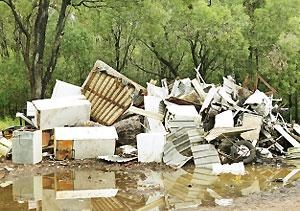 OPINION: Despite what Shakespeare may have said, there's a lot in a name. Canberra's tips, once the site of weekend recreational outings with the trailer, have long since morphed into business-like Resource Management Centres, where mooching of any kind is definitely not encouraged, and depositing anything other than recyclables will cost you quite a bit.
Although, as a community we fell well short of our 1996 target (''No waste by 2010''), it's not for want of trying. There is a concerted campaign to prevent as much waste as possible from entering landfill.

The good news is that a high percentage of the waste the territory generates - about 75per cent - is being diverted to recycling or resource recovery.

The bad news is that in aggregate terms, the amount of rubbish going into the pit is continuing to increase.

If you are wondering, as I did, why our average per capita performance is deteriorating, the explanation lies in the fact that roughly half the amount going to landfill is commercial, industrial and construction waste. Excavation and demolition work associated with Canberra's building boom has added considerably to the load.

In the most recent financial year, according to Territory and Municipal Services, the West Molonglo ponds project, in particular, contributed to an upsurge in the amount of treated fill requiring disposal.

The overall picture is not exactly cheering. While we are getting better at recycling and recovering resources, with more people and a bigger economy, we are generating more and more waste.

The best we can say of our efforts is that without them, we would be going backwards at a faster rate than we are at present.

Everyone is familiar with the re-use, recycle , repair mantra and most of us do our best to play our part. But the sad fact is that beyond composting the kitchen scraps and making sure the bottles and paper go in the yellow-topped bin, most of us find the going tough.

As with much on the green agenda, the low-hanging fruit has already been picked.

Recycling at the household level is hard work. It takes time, energy and thought to figure out what to do with the large amounts of stuff that is no longer needed but which might be useful to someone else. You have to identify and store the items, then work out where to take them, or pay someone to come and pick them up.

The ACT apparently can't afford green waste collection. So if, like us, you've off-loaded your trailer, you probably find you need a trash pack for garden waste and other items.

We use ours only for green waste, but the company says that even so, they can never be sure there isn't other material in the pack, and it all goes to landfill.

There are many items that won't go in the trash pack - such as old appliances, mattresses and gas bottles. For these you have to pay a hefty fee to do the right thing. To drop even a small TV set at the resource management centre will set you back $15.

A result of the user-pays regimen is that the resource management centres cost less to run, because charges collected from customers offset, to some extent, the cost of operating the centre. And of course, at the very least, paying to dispose of our unwanted items reminds us of the social costs of our consumption.

At least, that's the theory. It's hardly surprising that as disposal charges rise, less scrupulous folk than you and I take the easy way out and engage in dumping.

A public-spirited citizen recently drew our attention to the enormous amounts of rubbish that accumulate around charity bins, but that's only part of the story. Any piece of land that is not obviously ''owned'' is fair game. My own suburb provides some typical examples. An old water heater has been lying on the nature strip near our local shops for ages.

And the problem appears to be getting worse. Assorted appliances and, more ominously, lumpy plastic bags have started to appear at the ends of some public walkways, and the charity bins have become a magnet for unwanted TV sets.

The recycling industry says prices are not high enough to encourage investment in a more efficient collection of unwanted items.

But the problems go a fair bit deeper than that. While public policy tells us to have a care, our capitalist system needs us to keep consuming.

Indeed, the government gets quite concerned when we prefer to keep our credit cards in our wallets.

Manufacturers devote endless effort to coming up with new ideas that will encourage us to buy. Did we really need flat screen TVs? New era mobile phones? New computers?

We do not like to ask ourselves these questions. Yet we know e-junk is notoriously difficult to re-cycle.

We are told we should repair our fridges, dishwashers and washing machines rather than buy new ones. But there is a lot of competition in the marketplace and manufacturers are cutting costs wherever they can. So our appliances wear out sooner than they otherwise would. Repairs are available, but with the flag fall for the average repair-person being what it is, and diagnosis difficult, we are usually told that it makes more sense to ''get a new one''.

Quality in the sense of the reliability of consumer goods is probably better than it used to be. But durability? You can forget it.

So is there an answer to all of this?

Imposing price penalties on consumers who do the right thing is guaranteed to make only limited headway. Yet there is resistance from manufacturers to application of recycling incentives.

As far as I know, South Australia remains the only state to have legislated for a return price on drink bottles. To go further requires the implementation of ''Product Stewardship'' schemes to force manufacturers and distributors to take responsibility for their goods when they have reached the end of their lifecycle.

But the issues involved are complex and, so far in Australia, not much has been done.

That is the thing about being green. We are happy to shell out subsidies for solar and wind power, but deep down, we don't really want to pay the price of our profligate lifestyles.

Jenny Stewart is Professor of Public Policy at UNSW@ADFA. Her most recent book The Two Canberras: Essays on Public Policy is published by Ginninderra Press.

This opinion piece was first published in The Canberra Times