The number of students from disadvantaged backgrounds enrolling at university is set to increase following a $4.6 million expansion of UNSW’s ASPIRE program. 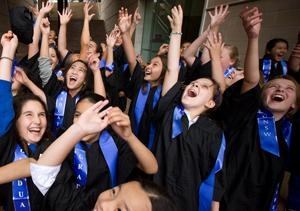 The numbers of students from disadvantaged backgrounds enrolling at university is set to increase following a $4.6 million expansion of UNSW’s ASPIRE program.

The innovative program aimed at widening participation in higher education received a significant funding boost from the federal government under its Higher Education Participation and Partnerships Program.

ASPIRE is a social inclusion initiative that actively promotes university to primary and high school students from low socio-economic backgrounds. It has grown rapidly since its inception in 2007.

More than 30 primary and secondary schools from across the state, including regional and rural areas, are currently involved in the scheme, which has so far assisted several thousand students. In 2011, 414 university offers were made to school leavers from ASPIRE-partnered schools - up from 253 in 2009.

"UNSW is committed to boosting student enrolments from low-socioeconomic backgrounds and attracting a whole new generation of high-potential students to the University," Professor Cooper says.

"Building on the success of the first phase of the program, ASPIRE is now focusing on building capacity of students, schools and communities. Many more students will now be able to benefit from this evidence-based program.”

ASPIRE Director, Ann Jardine, says raising awareness and aspiration of students to consider higher education as part of their future, is a key aim of the program.

“This is about giving students choices who previously felt that they had none. The most important thing is for more Australian children, no matter where they live, or what their background is, to have the opportunity to know what a university education could mean for their lives.”

Advice from a rapper

Towards a bright future