Parents of children with disabilities who self-manage their funding support are significantly happier than other carers, an Australian-first study has found. 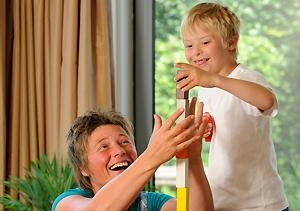 Parents of children and young people with disabilities who self-manage their funding support are significantly happier than other carers, an Australian-first study has found.

UNSW’s Social Policy Research Centre evaluated the Self Directed Support program, the first in Australia to focus on children with a disability aged 0-6 years, as well as 20-35 year olds with acquired brain injury.

The program was piloted over 12 months by the Queensland Department of Communities.

Families in the study were provided with a budget of $4,000 and chose which services to use with advice from an allocated coordinator.

Chief investigator, Associate Professor Karen Fisher, said the wellbeing of the parents was 25 per cent higher than that of Australian carers who weren’t self-managing their funds.

“Parents attributed the increased quality of life to having control over the support and services they chose for their child,” said Associate Professor Fisher.

One parent chose to spend money on equipment to help her son learn to walk, saying, “Since he has had that trolley for walking, you can’t stop him! He didn’t want to walk before.”

Other parents said having access to a knowledgeable support coordinator was invaluable. “It’s taken a huge amount of stress from us. It was such a relief to find this program.”

Associate Professor Fisher said the positive results of the trial have come at a critical time as the National Disability Insurance Scheme (NDIS) is about to be implemented.

“This pilot has national implications because children and young people are the most likely to benefit from the introduction of the NDIS. Improving their experiences, as well as that of their parents, is essential for early intervention and life stage transitions.”

Associate Professor Fisher said concern that individuals would mismanage their funds has overshadowed the positive outcomes of self-directed funding, and these fears are unfounded.

"People don't waste their funds on gambling or other activities," she says. "The families involved in the study were highly responsible and used the money wisely, often choosing to continue having their money managed by their support coordinator even when they had the option to do it independently."