The City of Sydney's Working Harbour collection is a brilliant portal to our maritime past and connects us to a very old history, writes Grace Karskens. 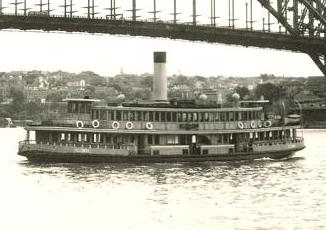 OPINION: Never mind the bush and the outback – Sydneysiders were a maritime people from the start.

The collection connects us to a very old history. Sydney’s Indigenous inhabitants, theEora, were saltwater people, as much at home on the waters of harbour and rivers as on dry land. Children grew up partly in bark canoes called nowies and learned to fish from their earliest years, the girls with lines and shell hooks, the boys with shell-tipped spears.

The early colonial settlers of the 1800s were also waterbound and waterborne – everyone in Sydney-town got around in boats in those years. Most of the early explorations were by water too, via Parramatta River, Pittwater, Broken Bay, and the mighty Hawkesbury River, when settlers finally found its mouth on an exploratory expedition in June 1789.

All the houses in the town faced out over the water towards the Heads that form the entrance to Sydney Harbour. South Head was the town’s eye, watching the ocean for the first sight of a sail. When the signal came from the flagstaff, the entire town would erupt in joy.

Australia’s first city grew limpet-like around the long headlands and deep bays, as wharves, slips and stores and then noxious industries such as abbatoirs encrusted the shorelines.

The waterside industries sprouted whole suburbs, such as the inner west districts of Balmain and Pyrmont, and Mortlake further west. Right up until the 1880s, around 80% of Sydney’s people lived within walking distance of Sydney Harbour.

Sure, the wealthy and privileged built their romantic villas on the heights, but ordinary folk had access to the waters too, for work, rest and play.

People always had to cross from shore to shore, so the ferries were an intrinsic part of Sydney, from the first ex-convict boatmen to the mighty fleet of double-ended ferries which carried up to 47 million passengers a year before the Sydney Harbour Bridge was opened in 1932.

Today, most Sydney people travel by car, and they live too far from the harbour for it to be part of their everyday life – except at festival-time, when hundreds of thousands gather on the foreshores and the fireworks light up a million upturned faces.

Yet the ferries still ply the waters, and Sydneysiders hold them in great affection. They featured in song, such as folk singer Bernard Boland’s Rose Bay Ferry with its doctors and accountants yearning to head out to the open sea instead of their city offices.

The Manly ferry was immortalised in the 1966 film They’re a Weird Mob, during the scene in which a loudmouthed Aussie drunk insults a cultured Italian family in the best old vaudevillian style (he ends up overboard, of course).

Maybe affection for ferries is a global human trait. US transcendentalist and poet Walt Whitman was passionate about ferries too. For him, they were “inimitable, streaming, never-failing, living poems”. Anyone who has ever watched the lighted ferries streaming into Circular Quay performing their moonlight boat ballet will know this poetry, the living poetry of a harbour city.

The Working Harbour collection donated to the council indefatigably records this deep maritime history, legacy and culture. Graeme Andrews contributes his own life-time knowledge too, with names, places, dates and priceless observations.

Who but a sailor with long accustomed eye could write of the tugboat St Giles that she is “riding so high in the water she must be nearly out of coals”?

In the this photo, taken during the Queen’s visit in 1954, two lines of excited small boats form a guard of honour for Her Majesty in front of Government House. You can almost see the flags fluttering and feel the tension, taut as a bowline.

A first world war photograph of ships moored off the Quarantine Station at North Head is a poignant reflection of that suspended time.

As the collier and ferry chug about their everyday business, the big ships are waiting to clear quarantine before passengers can finally disembark. But if ships were found to be carrying disease, their passengers were detained at the Quarantine Station at North Head. Some died there, in view of the city they never reached.

Ferries, tugs and launches turn up repeatedly, like faces and names in a family photo album: Andrews knows them all and many other Sydneysiders will too.

There’s something about the lovely shape of old boats; it’s enough just to look at them, as with this 1969 shot of the Christina at Woy Woy Bay.

But these images touch on something more intangible too, something connected with the spirit of place that ties past and present together.

Henry Lawson conjured this spirit in his poem Sydney-Side before the hardships of the 1890s depression soured Sydney for him:

Oh, there never dawned a morning, in the long and lonely days
But I thought I saw the ferries streaming out across the bays –
And as fresh and fair in fancy did the picture rise again
As the sunrise flushed the city from Woollahra to Balmain

And the sunny water frothing round the liners black and red,
And the coastal schooners working by the loom of Bradley’s Head
With the whistles and the sirens that re-echo far and wide
All the life and light and beauty that belong to Sydney side.

The Working Harbour collection means that 10,000 images of all that life and light and beauty now belong to everyone.

Grace Karskens is an Associate Professor of History at UNSW.