Clinical psychologist Frank Neuner told a UNSW Grand Challenges event that storytelling can be effective in treating refugees who have experienced trauma such as rape and torture. 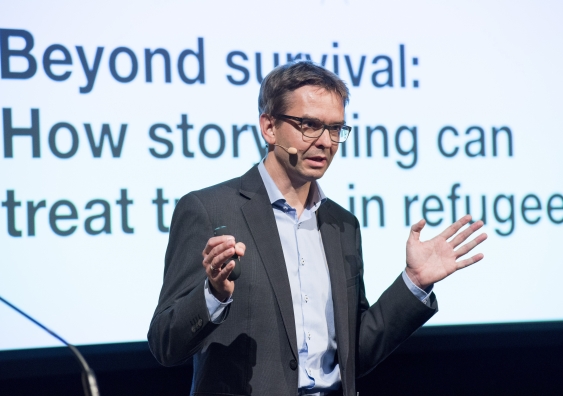 The international response to the ongoing migrant and refugee crisis ignited by war in the Middle East has largely focused on providing victims with basic needs such as food, water and shelter. But experts say more needs to be done to address the mental health of hundreds of thousands of people who have risked everything to escape war-ravaged countries like Afghanistan, Iraq and Syria.

Professor Frank Neuner, a clinical psychologist from the University of Bielefeld in Germany, discussed how storytelling can effectively treat trauma in refugees during a free public lecture at UNSW Sydney on Wednesday. The lecture was presented by UNSW’s Refugee Trauma and Recovery Program and its Grand Challenge on Refugees and Migrants.

Neuner co-developed Narrative Exposure Treatment (NET) with colleagues from the University of Konstanz in Germany more than 15 years ago. NET is a short-term mental health intervention for people who have experienced multiple and complex traumas such as rape, war and torture. It has been used to treat people with post-traumatic stress disorder (PTSD) in refugee camps in Africa, Asia and the Middle East, as well as in industrialised countries including England, Norway and the United States.

“It is important to address the mental health of these populations since post-traumatic stress impairs cognitive functioning and, in turn, language learning and adaptation,” Professor Neuner said. “Also, it is in our very own interest to contribute to the adaptation of refugees in our country. We need functioning people, we need people who can contribute to society.”

The procedure combines humanitarian support with a mental health approach. Unlike therapies that focus on a single event such as a car crash, NET involves the reorganisation of memories of traumatic events into a coherent chronological narrative. In more than a dozen controlled trials across cultures, NET has reduced symptoms of PTSD such as nightmares and flashbacks, that are common among refugees.

“NET is effective because it does not require a sophisticated cognitive treatment approach,” said Neuner. “It is brief and contains an element of testifying, which meets the needs of many survivors.”

In a limited number of sessions, a therapist and the client construct a written autobiography of the participant, including a detailed account of the traumatic events. The trauma memory is contextualized in a temporal and spatial representation that in turn reduces traumatic stress symptoms, enables functioning and helps refugees adjust to their new surroundings.