Social media is revolutionising disaster management and community building during and after emergencies, research into last year’s Queensland floods has found. 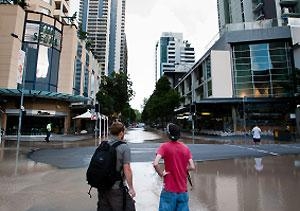 Social media is revolutionising disaster management and community building during emergencies, a study into social networking during last year’s Queensland floods has found.

Sites such as Twitter and Facebook were used by police and emergency teams, but equally by individuals trying to connect during the crisis – showing that Twitter has evolved from a mere social networking site to a critical emergency tool.

#qldfloods and @QPSMedia : Crisis Communication on Twitter in the 2011 Queensland Floods was released  by the ARC Centre of Excellence for Creative Industries and Innovation (CCI).

Professor Crawford, deputy director of  UNSW's Journalism and Media Research Centre, said the study focussed largely on the role of Twitter, which was prominently used by the Queensland Police Service during the crisis.

"We have been researching the uses of Twitter during times of crisis, and during the floods we paid close attention to the interrelationship between emergency services, the media, and individuals,” said Professor Crawford. “The Queensland Police Service's Media Unit (@QPSMedia) played a key role in getting timely and useful information out to the flood-affected population, and through Twitter, became a leading voice."

But social media didn’t just improve communication between police and media organisations. During the week of the floods, some 15,000 users – from official accounts to locals affected by the floods – participated in the #qldfloods hashtag on Twitter, sharing news, advice, photos and videos of the inundation.

“During times of crisis, many arguments and disagreements are suspended, and we see users come together to ensure that important information gets through to as many people as possible”, said Professor Crawford. “Social media users understand that their networks have become important additional channels for crisis communication.”

“The floods demonstrated that the way we use Twitter has changed. It’s not just a service for trivial 'what I had for lunch' messages, but a useful part of disaster communications for individuals, as well as emergency services and media in a time of crisis,” said Professor Crawford.

A particularly successful intervention by @QPSMedia was its series of ‘#Mythbuster’ tweets, which corrected rumours and misinformation circulating through social media (and some mainstream media).

Working with the Queensland Department of Community Safety and the Brisbane-based think-tank Eidos Institute, the research team will now embark on a three-year ARC Linkage research project which seeks to further investigate the use of social media during natural disasters in Queensland and elsewhere. The project will also develop improved strategies for the effective use of social media by emergency organisations.