AWU boss Paul Howes is pushing for social privatisation of government infrastructure to improve our cities. Should the ALP take heed of his advice, asks Mark Rolfe. 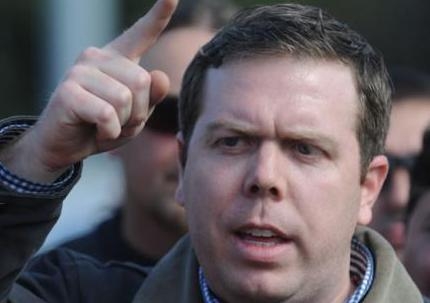 OPINION: In the aftermath of the devastating defeat at the election, it may well be best for the Labor Party to adopt the saying of Chairman Mao and “let a hundred flowers blossom” in the search for new ideas. It couldn’t do any harm to a scorched earth.

As the party prepares to name its new leader this weekend, one blossom popped above the soil in a recent article from Paul Howes, the National Secretary of the Australian Workers' Union and a member of the ALP National Executive. Howes proposed more privatisation of government infrastructure as a means of improving Australian cities and of providing more for most citizens than simply increasing their incomes.

Government-owned businesses would be sold to the superannuation funds that want to diversify their investments away from the volatile stock market. The A$219 billion worth of government infrastructure identified by Infrastructure Australia, such as sea and airports, as “lazy” could be sold off and the money used to fund new infrastructure.

The associated relief of transport problems would, according to Howes, solve another political problem – the asylum seekers who become the targets for so many people who “feel the pinch of our towns and cities failing to keep up with our growth”.

It’s an interesting idea that Howes admits is unoriginal. But no matter on that score; it is one Labor needs to debate.

Since their electoral drubbing in September, many in the ALP have begun to look to “Chairman” Gough for inspiration. Last week, Labor leadership candidate Bill Shorten recited Whitlam’s formula of 1960s opposition: the party, the policies, the people.

Now Howes has resurrected Whitlam’s interest in cities and his idea of the social wage – which is not a bad thing to do, especially since Bob Hawke and Paul Keating continued it with the expansion of Medicare and other social policies.

What Whitlam meant by the “social wage” was that government puts value in people’s pockets in addition to pay rises through:

…the availability and accessibility of the services which the community alone can provide and ensure.

It was through this social wage that the Whitlam government became the only federal government to take a major interest in our cities, and the provision of infrastructure and services.

Howes is obviously a talented political operative to have risen so far before the age of 32. But he advances these ideas with a bodyguard of “zombie” categories, terms that live on after their political death. His argument stands as an example of a larger political problem for Labor.

Howes establishes his credibility by siding with the “working men and women” he meets around the country in “places where the chattering classes rarely venture”, and where “the macchiato-sipping set” believe most Australians are racist. These “nimby” progressives, says Howes, will be most upset by reform-minded Labor.

It would be interesting to know who Howes thinks primarily reads the AFR. The heroic working class? The “much-mythologised aspirationals”, as he calls them? Actually71% of them are the AB demographic, the top 20% of the socio-economic pile.

Maybe all of these categories are much-mythologised. But to resurrect the cliches just perpetuates the culture wars language of the Coalition that Howes is so desperate to fight. These categories are clearly contentious, a “furphy that just won’t go away”, perhaps because people like Howes keep perpetuating them, but they were established by John Howard as his battlefield. That is, Howard continues to entrance Labor like a hypnotist but his methods are not analysed.

But these categories also allow Howes to depict Labor as the party of reform loyal to ‘true’ party beliefs such as Keating’s “big picture” and Ben Chifley’s “light on the hill”. And, last but not least, there’s another zombie category which occupies the minds of Howes and Labor: conservative.

Of course, “conservative” has a range of meanings, but in part it functions like other labels. It is a flag for the like-minded to gather around and, in this case, to cast themselves as bearers of tradition and history.

Nothing could be further from the truth when – at least in economic considerations – the Right consists of an array of liberals willing to upset a range of institutions and people’s lives with proposals for change. Ironically, Howes has this much in common with them when he says:

These are natural times for reformers. Our world is evolving at such breakneck speed it is virtually impossible for anyone to deliver the status quo. Great reform is required just to keep up.

Yet that is the very problem for many voters. Howard sought to soothe this concern with his assurances of a “comfortable and relaxed” Australia and of lifestyle being a “barbecue stopper”, while at the same time introducing a lot of change – before breaking upon the rocks of WorkChoices which was a change too far. It was a ‘natural time’ for him as a reformer up to that point.

The main point is that repetitions of zombie categories and political cliches allow Labor to avoid thinking about the role of government in relation to social goals. The ALP talks about free markets, but it has no clear, coherent, public case for what government must do. That was apparent in the last two elections, but not in 2007.

A hundred years ago, Labor had a clear idea that it must improve the changes capitalism brought rather than accelerate them, to “civilise capitalism” rather than let “cannibal capitalism”, as Billy Hughes called it, run wild. Even Keating accused Howard of being:

…a believer in primitive capitalism…moderated not by consensus about common social goals.

Talk of “social privatisation” could be a way of avoiding this discussion and of shoving socially useful political goals onto superannuation funds, as worthwhile as they may be.

A report by Infrastructure Australia, produced for the Council of Australian Governments, highlighted a “profound disconnect” in voters between wanting better infrastructure but not wanting to pay more taxes, have more debt or adopt a user-pays approach.

Many want something for nothing. Australia has among the lowest rates of net and gross debt, and taxes and government spending rates are also at the bottom levels of the OECD. And yet, many in the Coalition want to take it lower.

This is where the same privatisation advocated by Howes could be used by the Abbott government in order to satisfy the superannuation sector. Or to satisfy the financial sector, and build a block of voters who would buy shares – as happened in Howard’s time.

Either way, the government of the day would have to consider whether to price these assets at their market value, or as empirical evidence seems to find, price them cheap to sell. This is what the Howard and state governments did, following the practice of other countries. Should this bonus be given to superannuation funds?

On this question of the role of government, former treasury secretary Ken Henry has a clearer idea of a positive role for government than some of the Labor Party. Henrypointed to “a lack of strategic planning for the nation’s infrastructure needs” and:

Getting it wrong can allow state governments (which control the urban planning required under Howes' idea) to open the gates for developers and other interested parties wishing to ride the gravy train. The NSW state government already has watered down planning requirements for the Barangaroo casino, which has led to numerous resignations. Last week, the latest resignation was a notable overseas consultantannoyed by the lack of consultation and downgrading of public amenities.

In other words, we could have a replay of much of Sydney’s history – and Australian history for that matter. The people Paul Howes wishes to help may become the victims of developmental enthusiasms, including those awful, nimby macchiato-sipping, progressives.

Dr Mark Rolfe is a Lecturer in the School of Social Sciences, UNSW.