Opinion I had an idea in the 1980s and to my surprise, it changed education around the world

There are two types of knowledge – we've evolved to acquire the first naturally; we need schools for the second. Cognitive load theory explains how to teach knowledge we don't automatically get. 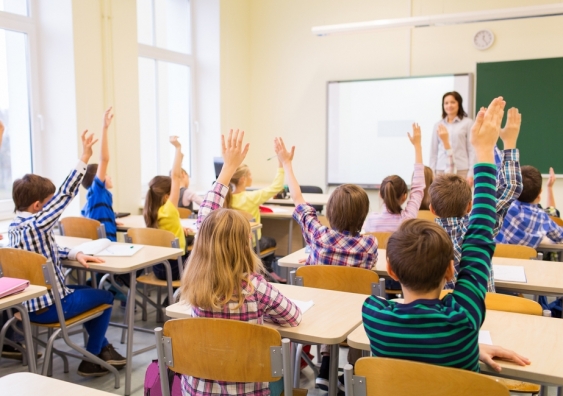 Cogitive load theory explains why explicit guidance from teachers is more effective in teaching students new content and skills than letting them discover these for themselves. Image from Shutterstock

Explicit guidance and feedback from teachers is more effective in teaching students new content and skills than letting them discover these for themselves.

This is a premise of cognitive load theory, which is based on our knowledge of evolutionary psychology and human cognition, including short- and long-term memory.

I started working on cognitive load theory in the early 1980s. Since then, “ownership” of the theory shifted to my research group at UNSW and then to a large group of international researchers.

The theory holds that most children will acquire “natural” skills – such as learning to listen to and speak a native language – without schools or instruction. We have specifically evolved to acquire such knowledge automatically. It is called “biologically primary knowledge”.

But there is another category of knowledge – “biologically secondary knowledge”, which we have not evolved to acquire. It consists of virtually every topic taught in schools from reading and writing to science and maths.

Cognitive load theory is concerned with the acquisition of secondary knowledge.

The theory now underpins the method of explicit instruction – where a teacher will explicitly provide students with information or demonstrate a way of doing things – a common means of teaching in schools. Cognitive load theory explains why this method works.

How we get secondary knowledge

People can acquire secondary knowledge in two ways. The easiest and quickest is by listening to other people or reading.

But if other people aren’t available, secondary knowledge can be discovered during problem solving – such as engaging in research. Such discovery, or inquiry, works but is slow and inefficient. It should only be used when we cannot obtain needed information from others.

Whatever way it’s acquired, new secondary information must first be processed by our working (or short-term) memory. We use working memory when we are paying attention to something. But this memory resource is severely limited in capacity and duration.

When faced with new, secondary information, working memory can process no more than about two to three items of information at any given time and for only about 20 seconds.

Once the new information has been processed by working memory, it can be transferred to a long-term memory that has no known capacity or duration limits. 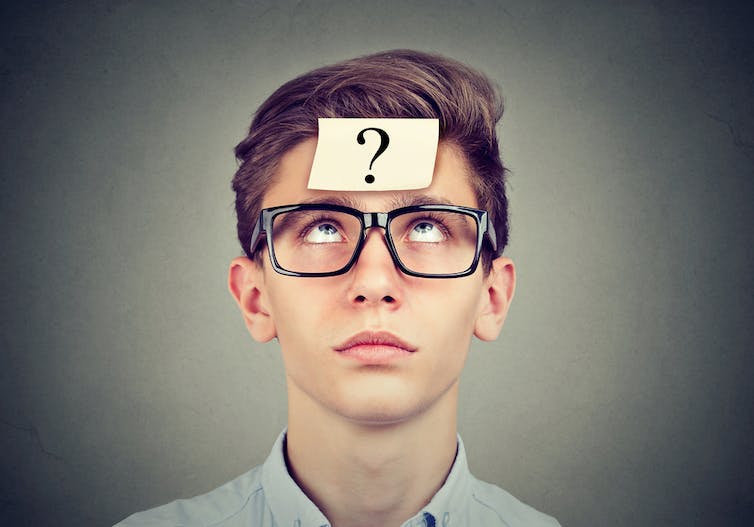 We can only process two or three bits of new biologically secondary information in our short-term memory at any one time. from shutterstock.com

Think of what you are doing now. You are faced with an immensely complex set of squiggles on a screen. The reason they don’t appear complex to you is because of the enormous amount of information you hold in long-term memory.

Information which has been processed in working memory and stored in long-term memory can be transferred back to working memory to generate action and thought appropriate to a given context. That is what we do when we read.

Working memory has no capacity or duration limits when dealing with familiar information from long-term memory.

Probably the best-known teaching method is based on the “worked example effect”. This occurs when students who are shown how to solve a particular problem or write a specific essay learn better by studying an example first, instead of generating a solution themselves.

The first group performed significantly better on a subsequent test of similar problems to the example. Subsequent work demonstrated the same effect on transfer problems that differed from the example, than the group who had to come up with the the solutions themselves.

Dozens of randomised controlled studies have demonstrated this effect since.

Studying a worked example reduces the working memory load compared with generating a solution yourself. When solving a problem, you will inevitably consider a large number of possible moves, many of which do not assist in reaching the solution.

But when the solution is provided by a worked example, you are shown exactly which moves are relevant and you don’t have to consider a large number of alternative moves that lead to dead ends.

The problem solutions can be stored in long-term memory.

Once lots of problems and solutions are stored in long-term memory, we are in a better position to work out a solution to a new problem that can be related to previously learned solutions.

Basically, to think deeply, we need lots of knowledge stored in long-term memory.

To reduce unnecessary cognitive load, teaching must be properly structured. Learning is impeded, for instance, if students need to unnecessarily split their attention between several sources of information such as a diagram and text. But learning is facilitated by physically integrating the diagram and text.

Think of a geometry diagram with statements underneath it saying things like “Angle ABC = Angle DBE (vertically opposite angles are equal)”.

Experiments have demonstrated that the very simple act of placing the statement on the diagram itself (putting “Angle ABC” next to where angle ABC actually is) reduces the cognitive load. 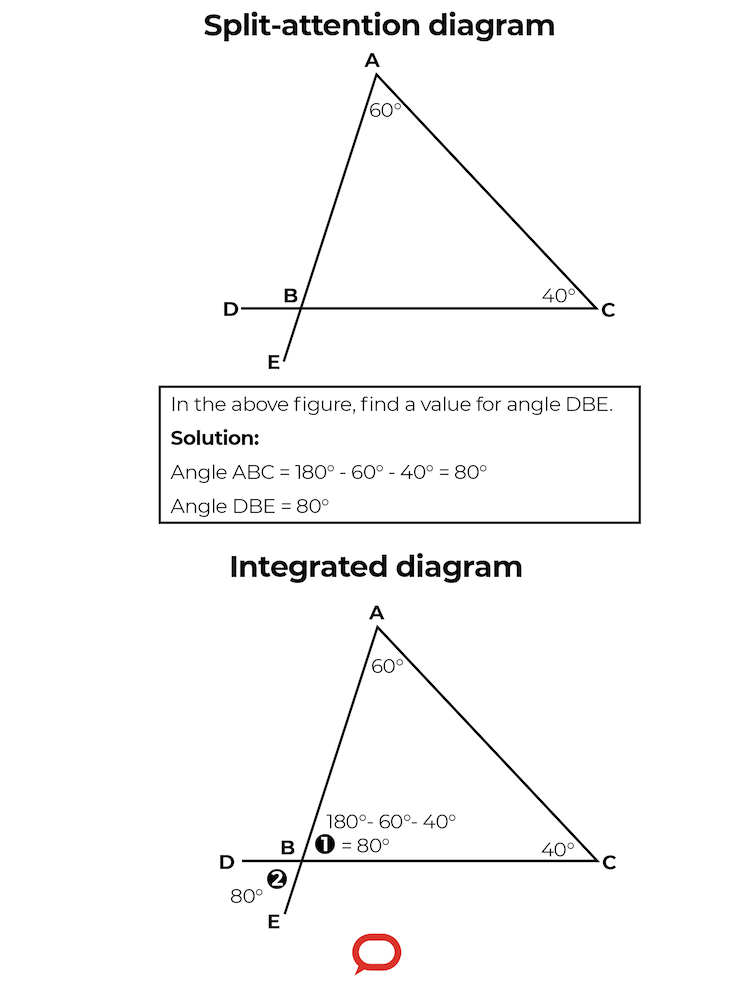 But if the text is redundant to the diagram, it should be eliminated altogether. For example, if you are teaching how the blood flows through the heart, lungs and body you might provide a diagram with arrows indicating the direction of flow.

A statement such as “blood flows from the left ventricle to the aorta” is redundant because it should be clear from the diagram. Studies have shown giving students the diagram alone reduces the cognitive load compared to students who are given a diagram with redundant text.

These effects can only be shown if the information studied is complicated. If a student is learning the symbols of the chemical periodic table (Fe stands for “iron”), it does not matter how the information is presented because the cognitive load is low. 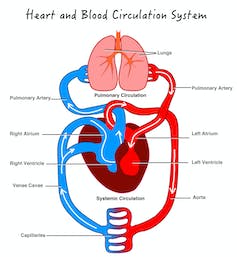 Cognitive load theory assumes that, for example, critical thinking is biologically primary and so unteachable. We all are able to think critically if we have sufficient knowledge stored in long-term memory in the area of interest.

A car mechanic can think critically about repairing a car. I, and I dare say most of you reading cannot. Teaching us critical thinking strategies instead of car mechanics is likely to be useless.

Help! My brain is overloaded!