Not only is Eddie Obeid an old acquaintance of ICAC's, he is the link between successive political casualties, argues Mark Rolfe. 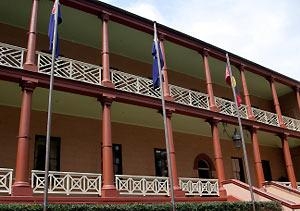 OPINION: After hearing recent evidence to the Independent Commission Against Corruption, I find this line too good to resist: “Moses Fingers Jesus as Culprit in Mining Maps”.

I refer, of course, to Moses Obeid, son of Eddie the ex-NSW MP and much respected pillar of our community who is currently appearing before ICAC with its enquiries. He referred the counsel assisting to a certain Nazarene when asked why there were pencil marks on mining maps that should not have been out of the Department of Mineral Resources, let alone in the offices of the Obeids where they were found after a raid.

This family is now under investigation for allegedly acquiring a few pittances from insider knowledge about mining leases issued by the state government that led them to buy up land in the Bylong Valley. The few pittances seem to be in the range of $60 to 100 million and ICAC is intent on questioning the relevant minister of the time, Ian McDonald, who seems to have received great affection from hundreds of phone calls in one year from the Obeids.

To continue the religious line, I’m sure Premier Barry O’Farrell is thanking God each night and thinking She votes Liberal. Probably, Tony Abbott is as well. After all, the latter has been banging on since 2010 about the “faceless” men (I’m sure I know what Mark Arbib looks like) who dominate the NSW branch of the Labor Party and deposed Kevin Rudd, thus exporting the “NSW disease” to federal politics. That is, “our Kev” went into a revolving door and came out as “that Julia”, just as Morris Iemma, Nathan Rees and Kristina Keneally twirled through as Premiers of this great state.

It’s been a potent line, even if it was slippery with the facts. Nevertheless, the link between these successive political casualties is the aforementioned Eddie, once the formidable party powerbroker and leader with Joe Tripodi of the “Terrigals” faction which dominated the Right faction of the parliamentary Labor Party and so dominated the rest of the party in the NSW parliament. Thus, Bob Carr was more Sergeant Schultz than premier in this squalid scenario.

Transport, health and other infrastructure were boiling concerns for voters but after Iemma was deposed they were left with the impression of a party not only disappearing up its own fundament but only concerned with itself.

For example, ICAC and Eddie are old acquaintances, if not BFFs. He appeared before ICAC in 2002 over allegations of a $1 million donation to the party for a development project in Liverpool.

Consequently, according to election analyst Antony Green, the 2011 state election was a “pretty devastating result for the NSW Labor Party”. Although a lot of rubbish has been uttered in the past about traditional Labor battlers deserting the party for the Coalition (see this paper for a sensible rejoinder), Green stated “The Liberal Party even won a majority of the vote in Western Sydney, a first preference vote of 43.5% to 36.6% for Labor, a Liberal two-party vote of 53.8%”. The Coalition were also outpolling Labor in heartlands like the lower Hunter, such as Newcastle. More than a year later, the local elections of 2012 reinforced this trend.

Now, in 2013, a similar picture of NSW has emerged federally. One poll of 54 marginal seats show the ALP on 45.1% and the Coalition on 54.9% on two party preferred basis. This is in the realm of other polls. Significantly, it predicts a loss of more than ten seats in this state with double digit swings bashing Labor.

In other words, the election of the O’Farrell ministry did not lance the electoral poison in the hearts of many voters towards Labor. Usually, the animus moves on, as happened in Queensland after the political tsunami that hit Anna Bligh and left her party small enough to fit in the parliamentary bathroom.

If nothing else, Obeid’s appearances before ICAC in 2002 and 2013 demonstrate how different the Labor Party was from the beast of old. As much as Abbott likes to claim the “NSW disease” is the problem there is another. Since the 1990s, the constant complaint has been about the empty heart of the party, the vacuum of beliefs, the failure of anybody to know what it stands for.

Obeid is more symptomatic of a greater problem. He rose to power, wealth and parliament in the era after the Hawke government dismantled many of the old beliefs. The party has been left without an ideological compass, meanwhile, the careerists moved up the political and economic ladder without a worry.

All this provides a delicious opportunity for Barry O’Farrell. He can relish the constant drip of revelations between now and federal election day and enjoy the slow roasting of Labor. With a straight face, he can front the cameras on the rooting out of all that is naughty and not nice to voters and portray his own side as up holders of the public good.

Of course, his memory will remind him to avoid blowback to this own side. In the late 1980s, Nick Greiner capitalised on perceptions of Labor corruption to become premier and then set up ICAC. However, the new body later concluded he was corrupt in an offer of a public service job, although the courts threw this out. But the whole thing damaged the Coalition and lay dormant in its recesses for a long time.

O'Farrell will also remember the Fitzgerald inquiry launched in Queensland in 1987. This was set up by the acting premier while Joh Bjelke-Petersen was out of the state in response to an ABC Four Corners expose of corruption of politicians and police. It not only caused the downfall of Joh and the gaoling of three former Coalition ministers and a police commissioner but also initiated a major overhaul of the political system. Fitzgerald wanted to establish structures and procedures that would improve accountability and reduce the possibilities of swapping of favours and political donations.

Like O’Farrell and Greiner, Labor leader Wayne Goss rode into power on a wave of revulsion at political corruption and a promise to clean things up by implementing the Fitzgerald Report. Consequently, the Criminal Justice Commission was established to oversee political and bureaucratic behaviour. Parliamentary committees were bolstered. An independent electoral commission was set up to ensure fairness and to eradicate the malapportionment and gerrymandering that buttressed Joh. In other words, Queensland finally entered the late twentieth century of parliamentary government and democratic accountability.

Nothing is so good for a politician as riding the popular waves of disgust at the game of politics. That’s what Wayne, Nick and Barry found. But nothing so ambitious as the Fitzgerald Report is wanted by Barry for fear of blowback on his side and losing the political advantage he currently enjoys.

In fact, he will press home the advantage with changes to political donations to cut off the ALP from union funding, all under the guise of fairness. And enjoy the reality TV program called ICAC.