Opinion Ideas matter in contest between West and Islamic State

Joy and good tidings are in short supply after a year overshadowed by bloody massacres and terrorist outrages, writes Alan Dupont. 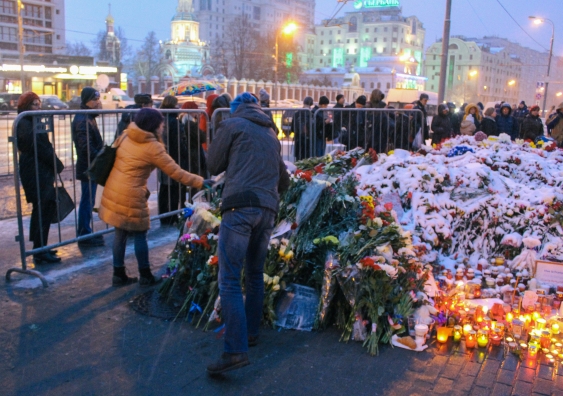 OPINION: As the season of joy and good tidings approaches, there seems precious little of either in a year bookended by violent, bloody massacres in Paris and punctu­ated by countless other terrorist outrages around the world.

Not since World War II have there been such levels of ­instability, conflict, bombings and the routine killing of innocents in the name of an ideology.

Once terrorism was seen as a marginal security issue, but today it dominates the international ­security agenda. So much so that Foreign Minister Julie Bishop was moved to ­declare in April that ­Islamic State posed the greatest threat to civilisation since World War II, “including the rise of communism and the Cold War”. Critics panned Bishop for ­exaggerating the threat. But her analysis looks prescient. With each passing month, the challenge posed by ­Islamic State and its fundamentalist acolytes is becoming disturbingly clear.

This is not the state-sponsored proxy terrorism of the 1980s or even the non-state terrorism of al-Qa’ida. In the past 18 months, ­Islamic State has unleashed forces and raised possibilities that go well beyond anything previously ­envisaged by terrorist organisations themselves, and certainly by their many victims. Like a virus, each terrorist ­mutation has become more complex, dangerous and difficult to combat, with counter-terrorism agencies repeatedly wrong-footed and on the defensive, revealing ­serious intelligence and policy failings.

The November attacks in Paris demonstrated a further lethal evolution in Islamic State tactics that the terrorism expert David Kilcullen astutely described as moving from classical terrorism to the early stages of urban, guerilla warfare directed at the iconic cities of the West.

Fixating on the macabre body count risks ignoring the real threat posed by Islamic State and its ilk. The transcendent contest is one of opposing values and belief systems. Islamic State wants to create a caliphate of the mind as well as physical space.

The message is clear: Islamic State intends to wage war in the West as well as in its Middle East heartland. And it has an unparalleled capacity to do so, far beyond al-Qa’ida’s spectacular but one-shot attack on the US homeland 14 years ago. Security organisations now have to worry about the very real prospect of mass terror attacks, on many fronts, in addition to returning foreign fighters, terrorist sleeper cells and “lone wolves” who can strike soft targets anywhere, any time.

There are other reasons to think Bishop is more right than wrong. Since 2012, there has been a threefold spike in deaths from terrorism. Last year more than 32,000 people were killed in terrorist attacks. This figure does not include the hundreds of thousands who have died in terrorist-inspired conflicts, the millions who have been dislocated or ­enslaved, or the widespread fear and anxiety generated by multiple acts of terrorism that are tearing at the social fabric and cohesion of countries across the globe.

But fixating on the macabre body count risks ignoring the real threat posed by Islamic State and its ilk. The transcendent contest is one of opposing values and belief systems. Islamic State wants to create a caliphate of the mind as well as physical space. To do so, it must convince political recruits and adversaries alike that its world view is ascendant and will prevail.

So we should not be surprised that the key weapons in the Islamic State arsenal are not suicide bombers or improvised explosive devices but social media and the internet. In this contemporary battle for hearts and minds it is the mobile phone, rather than the pen, that is mightier than the sword.

Thus far, Islamic State has succeeded beyond its wildest dreams and our worst fears. Already there is talk in the West about a clash of civilisations between Muslims and non-Muslims, which serves only to reinforce the Islamic State narrative, as Barack Obama and Malcolm Turnbull recognise.

Despite setbacks in Iraq, Islamic State has increased the territory under its control in many ungoverned spaces, with Libya and eastern Afghanistan the latest terrorist hot spots to emerge.

Fighters from all over the world continue to flock to the Islamic State standard despite severe losses. In the past 16 months, about 20,000 Islamic State combatants have been killed in Syria and Iraq. Yet, in a testimony to the effectiveness of the organisation’s propaganda, its numbers have increased in the same period from about 12,000 to 30,000 because of an influx of foreign fighters from 86 countries, including ­Australia.

Despite setbacks in Iraq, Islamic State has increased the territory under its control in many ungoverned spaces, with Libya and eastern Afghanistan the latest terrorist hot spots to emerge. It is this resilience that makes the organisation such a formidable enemy. Of course, Islamic State is not 10 feet tall. The coalition strategy in Iraq is beginning to bear fruit, with the terrorist ­redoubt of Ramadi on the verge of falling to Iraqi forces. However, the fall of Ramadi, Mosul and caliphate headquarters in the Syrian city of Raqqa will mean little if Islamic State reconstitutes itself in Libya and Afghanistan and continues to recruit foreign fighters.

Three crucial adjustments to the coalition strategy are needed to ensure a decisive defeat of ­Islamic State.

First, Syria and Iraq must be seen as regional operational theatres in an overarching war against terrorism that must be fought and won globally. Coalition military strategy is too heavily focused on Syria and Iraq. We should be hitting the emerging Islamic State forces in Libya and Afghanistan now before they morph into a third and fourth front.

Second, Vladimir Putin and Bashar al-Assad must be enlisted in this fight even if it means ­making some uncomfortable moral and political compromises. Such marriages of convenience are justifiable in the common ­interest of bringing to a speedy end the barbaric and egregious ­excesses of Islamic State.

Third, Western leaders must continue to rebut the argument this is a religious war between Muslims and non-Muslims, or a clash of diametrically opposed ­civilisations. Nothing is further from the truth. The real contest is one of ideas, between inclusive cosmopolitanism on the one hand and exclusive sectarianism on ­the other hand. Most Australians already have decided in favour of cosmopolitanism. The challenge is to prevail over the toxic sectarianism of ­Islamic State.