Opinion Identity crisis: who does the Australian Labor Party represent?

The key problem facing Labor leader Bill Shorten is one he has in common with every past leader: remaining true to Labor values, while adapting them to a changing Australia, writes Mark Rolfe. 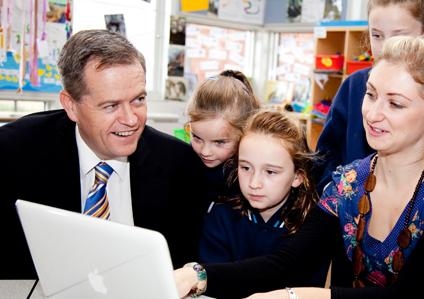 OPINION: The key problem facing federal Labor leader Bill Shorten in the wake of the Western Australian Senate re-election is one he has in common with every past Labor leader. The Australian Labor Party is always expected to be true to traditional “Labor values” but also has to adapt them to a changing Australia.

While the ALP can talk about good and necessary government policies to help particular groups (such as the National Disability Insurance Scheme) and it can talk about health and education broadly, when it comes to economics and the need to help in a globalised age it has lost the ability to talk of government doing public good for all. All it can do is talk about the free market.

From Calwell to Whitlam

A recent poll asked if Labor looked after the interests of working people. And 54% thought it did, but this was hardly resounding, since 49% thought it was out of touch with ordinary people.

Nonetheless, there are clear assumptions that Labor exists to look after the working class. This is a legacy from the past that is a burden and a blessing.

The problem is, who are the working people in today’s Australia when most Australians define themselves as “middle class”?

The ALP began in the 1890s as a vehicle for blue-collar working-class people who felt they had no political voice. Unions were woven into their lives in the small communities from which they barely strayed.

Appealing to the blue-collar vote was acceptable as long as flat caps, heavy boots and misshapen trousers were the uniforms of working-class men. But in the 1940s Australia started to change appreciably. The link between the ALP and the votes of blue-collar workers started to break down.

Blue-collar workers now make up only a small portion of the labour force. Among other things, industrialisation after World War Two expanded the working class in the factories but also changed its composition with immigration from all sorts of countries.

Also, the seemingly widespread affluence of the new consumer society and burgeoning levels of home ownership during the 1950s and 1960s seemed to leave behind the old socialist arguments about poverty, exploitation and depression. Labor was moribund and stuck in the past with leaders like Arthur Calwell who refused to modernise the party.

This was the case until Gough Whitlam came along. He broadened party organisation. He dropped the references to the working class while calling everyone “comrade” and attracted new categories of voters and new constituencies for Labor.

Whitlam was the first political leader to recognise women as a political category in their own right and not appendages to men as daughters, wives and mothers. He appealed to Aboriginal Australians as voters and to migrants as more than New Australians or refugees.

But Whitlam also aimed to keep the core voters of Labor with a general approach that emphasised the general good that the government could do for all. In other words, Whitlam broadened the ALP’s appeal beyond the unions and the traditional constituencies because all major political parties must be seen to appeal to sectional but also national interests.

The growing sentiment of mythology and party lore over the decades has been an understandable but also distracting nostalgia. From the beginning of the 20th century, the ALP had to look beyond the core constituency of unions and workers to sections of the middle class to win office and to insist on ruling for all groups – not just for the union movement.

This is what happens when you have to aim for more than 50% of the vote. And failure to look further afield helped account for the 23 years Labor spent out of power federally between 1949 and 1972.

The ALP must get a majority by going beyond its core constituency while risking offence to this constituency. And yet, it must try to keep both. Consequently, there was often conflict in the past between trade unions and political leaders over this strategy.

One of the problems since its 1996 election loss is that too many Labor MPs have swallowed the right-wing Kool-Aid. They took to heart John Howard’s critique that true Labor voters – the “Howard battlers” – left the ALP for him while the party chased the inner-city middle class and “minorities”.

Howard defined the ALP in the absence of the party defining itself, even though it was swinging voters – not true Labor supporters – who flocked to him.

Consequently, there was the rush of unrequited ALP affection for the “aspirationals” of western Sydney, for instance. However, the party forgot about appeasing its core vote with the promise of help. It forgot about the balancing act.

Last year, voters in western Sydney were still squirming like a reluctant teenager embraced by an over-affectionate aunt when Julia Gillard toured the area.

The ALP has been unable to define itself as anything but a party devoted to free-market reforms since the Hawke government in the 1980s. The party has lobotomised itself of its history. Although there had been progressive deregulation and reform over the years, this was done as part of an overall plan of state intervention.

The Hawke government introduced the Accord, a series of wage and tax deals between the government and the union movement. It also brought in compulsory superannuation (government-legislated providing rivers of gold to a finance sector that hypocritically talks of free market for others) and a series of plans for cars, steel, textile, clothing and footwear that involved the government, appropriate businesses and business organisations, and unions. And helping BHP with almost A$1 billion doesn’t sound free market to me.

These plans involved government spending to help modernise in exchange for a timeline for dropping tariffs and targets for exports. But this history has been cut from the corporate memory, and in the process the ALP has lost the ability to talk about government doing public good for ordinary people.

This failure of the ALP to find its voice, except briefly in 2007, partly accounts for sentimental attachment to the unions as the ballast that will keep the party on the right social democratic path. This is even so despite union members making up only 18% of the workforce.

This failure to find its voice also means the ALP is not knitting together constituencies when there is more than enough evidence that middle and working-class people will be loaded with the burdens of a changing economy.

This piece by Dr Mark Rolfe, Lecturer in the School of Social Sciences, first appeared in The Conversation.