Regulating rent increases could provide cost-of-living relief for those feeling the biggest squeeze. 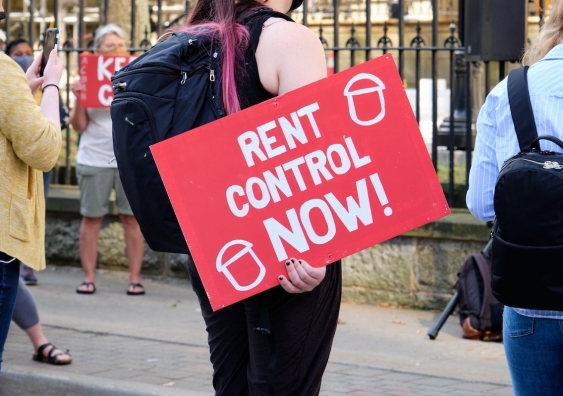 Greater use of rent controls could ease the pressure on renters’ pockets and keep them in their homes. Photo: Wandering Views / Shutterstock.

The rising cost of everyday essentials has most people feeling the pinch. But if you’re a renter and haven’t already been hit with a rent increase, there’s a good chance you’re especially worried.

Property data sources like CoreLogic show rents in Australia are climbing across capital cities and the regions. Meanwhile, vacancy rates are also at record lows – below 1 per cent in some areas – as the demand for rental housing continues to drive up prices.

While landlords have benefited from these stunning rent increases, the real impact is felt by households – many on low incomes – relying on rental housing, says Dr Chris Martin, Senior Research Fellow from the UNSW City Futures Research Centre.

“If there’s a supply response, it just can’t come fast enough,” Dr Martin says. “In the meantime, it’s causing pain to households, many of whom are already in rental stress, and it can displace them from the communities they want to be in or have been in for a long time.”

Currently, tenancy laws regulate the frequency of rent increases – usually no more than once every six or 12 months, depending on the jurisdiction. Tenants can also challenge a rent increase for being excessive to the general market level of rents for comparable premises.

“We currently have very light regulation of rents during tenancies, in terms of frequency of increases and ‘excessive to market’ provisions, and there’s no regulation of rents at the beginning of tenancies at all. It’s just whatever the market will bear,” Dr Martin says.

But greater use of rent regulation, including capping the amounts rents can increase during tenancies, could be one way to help relieve pressure on renters’ pockets and keep them in their homes.

“Proper rent control hasn’t been discussed for a while in Australia, but it’s something that should be on the research and policy agenda,” Dr Martin says.

The argument for controlling rents

Dr Martin says housing is often treated as a means to grow wealth rather than a fundamental need. He says there’s no reason housing shouldn’t be considered, and regulated, like many other essential goods or services are.

“There should be regulation of rents in principle because everyone needs housing, and the consequences of not having it are dire,” Dr Martin says.

Regulating the price of rents would help ease a significant cost of living pressure for households, Dr Martin says. It would better enable renters to stay in their homes through more affordable pricing, while preventing landlords from taking windfall gains at their expense.

“Rents are increasing but not the quality or output of the housing service. This is the problem with property investment: it promises that you can make a lot of money doing absolutely nothing,” Dr Martin says. “A landlord just happens to have acquired property in a place that has become more desirable. In almost all cases, the dwelling quality is declining while they make more gains.”

“There should be regulation of rents in principle because everyone needs housing, and the consequences of not having it are dire.”

In the absence of rent regulation, Rent Assistance paid through the social security system is the principal policy intervention for housing affordability in Australia. However, Dr Martin says it isn’t effective enough because many households in need are ineligible, and the amount is insufficient to make market-level rents affordable for many.

“There are about a quarter of a million low-income renters who don’t receive Rent Assistance at all and are paying unaffordable rents,” Dr Martin says. “And for more than a third of people who do receive it, even after accounting for all their Rent Assistance going towards the rent, they’re still in rental stress.”

The other alternative to private rental is the social housing sector. However, the construction of new social housing has stagnated for decades, and what little stock is available can’t keep up with demand.

“While social housing does provide more affordable rents, there’s not nearly enough to meet the needs of everyone who needs it,” Dr Martin says.

Regulation of rents could be pro-housing development, Dr Martin says, as it encourages landlords to increase land use intensity, increasing the availability of rental housing.

“If you’re the owner of land and rents are properly regulated, the way to increase your rental income would be to develop it further. So, rent regulation could be consistent with or even encourage rental housing development.”

While you might think rent control in Australia would be innovative, many states – particularly New South Wales – already have a history of rent control measures during economic crises.

Rents were regulated as part of the Fair Rents Act during the First World War, and a form of control was also reintroduced in 1931 during the Great Depression to help make housing more affordable. Rents were also regulated nationally throughout the Second World War, where rents were capped at the 1939 levels.

“To this day, there are still a handful of properties that would be covered by post-war rent control regulations in New South Wales that have kept them well below the market level,” Dr Martin says.

But there are also other forms of rental regulation in many countries today.

Most Canadian provinces have guidelines that stipulate the maximum percentage increase in rent that can be charged in the next year. Ireland introduced location-specific rent regulation where rents are capped at 2 per cent a year in designated ‘rent pressure zones’. Some properties in the United States are also subject to regulation where rents are benchmarked and adjusted to historic price levels.

Dr Martin says capping rent increases in line with the Consumer Price Index could be one of the ways to implement rent control in Australia. The rationale would be that it maintains the real value of the landlord’s return on their investment. In the interim, though, we could return to a temporary freeze on rent increases to alleviate the pressures on renters immediately.

“During the early days of the COVID-19 pandemic, some states introduced six-month rent freezes, which helped to keep households in their homes,” Dr Martin says. “We should be looking around the world to see how other countries have successfully implemented rent control for the long term, without being too prescriptive now about any particular method.”

“If rents are regulated, but you’re not also providing reasonable security for tenants, landlords can threaten tenants with no-grounds evictions to put their properties back onto the market,” Dr Martin says.

Dr Martin says reforms need to go further to ensure landlords can’t unreasonably terminate tenancies without grounds, including at the end of fixed terms, as it undermines every other tenancy right such as challenging a rent increase.

“The legal insecurity of being a renter in Australia is routinely exploited by landlords,” Dr Martin says. “Getting rid of no-grounds terminations is something all jurisdictions should be looking to do right now to better protect renters.”