PhD student Rosemary Grey travelled to The Hague to witness the International Criminal Court's first verdict in its 10-year history. 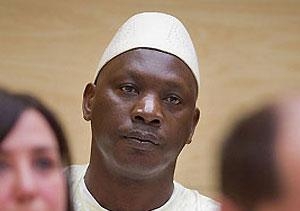 OPINION: On March 14 2012, the International Criminal Court (ICC) convicted its first defendant Thomas Lubanga Dyilo, for enlisting, conscripting and using child soldiers under 15 years of age. It took Presiding Judge Adrian Fulford just over half an hour to deliver the verdict, although Mr Lubanga’s sober expression throughout the hearing suggested he saw the conviction coming before it was formally announced.

Watching the hearing, I was struck by how much of the Court’s politics could be read into the courtroom proceedings, or perhaps projected onto them. In their uniform black, the lawyers appeared as de-personified components of a system, while Mr Lubanga, all in white, stood out as the human in that system. The person on trial, the individual whose rights to a fair and impartial hearing are spelled out in the ICC Statute.

The judges’ commitment to upholding these rights has been apparent over the six years of the trial. In fact, concerns that Mr Lubanga was not getting a fair trial nearly drove the judges to stop the trial on two occasions. First when the Prosecutor refused to disclose evidence that might have helped Mr Lubanga’s defence, and again when he refused to reveal the identity of an intermediary who had assisted with the investigations.

The Prosecutor, Louis Moreno-Ocampo, listened with crossed arms and an impassive face as Judge Fulford chastised him for almost bringing the trial to a standstill due to these problems in front of the packed gallery on Wednesday.

One of the more note-worthy people in that gallery was Angelina Jolie (although those of us seated in the regular-people’s area weren’t able see her!). Her somewhat incongruous presence created a bridge between the remote-seeming ICC bubble and the more familiar world of pop culture, and of course drew additional media attention to the hearing: exactly the intention, no doubt.

The diverse range of nationalities present in the courtroom hinted at the truly international face of the ICC: judges from the United Kingdom, Costa Rica and Bolivia, an Argentinian Prosecutor, a Ghanaian Deputy Prosecutor, a French-led defence team, and a defendant from the Democratic Republic of the Congo (DRC).

Absent from these leading courtroom actors were representatives of the United States, China and Russia, the three permanent members of the United Nations (UN) Security Council who, despite their willingness to refer situations to the ICC through Security Council resolutions (notably, without providing corresponding resources) have declined to join the 120 states who are signatories to the ICC Statute.

As a researcher focussed on the links between gender and justice, I was interested to note the balance of women and men in the courtroom, reflecting the ICC Statute’s attention to gender issues, including the requirement that the states must think about making sure there’s a fair representation of male and females when they select the judges for the Court.

One could only imagine that Mr Lubanga’s unmistakably African attire would, whether consciously or unconsciously, fuel existing perceptions of the ICC as “the European Court for Africa”. It isn’t easy to get around this perception, when all seven of the situations currently before the Court are from Africa, and when the African Union (AU) Commissioner, Jean Ping, insists that the ICC is targeting African leaders.

The fact that the AU has called on its member states to ignore the ICC arrest warrants for Sudanese President Omar Al Bashir, has only increased the signs of tension between the AU and the ICC.

Unfortunately for the ICC, the counter-arguments to these post-colonialist critiques are not so apparent to the uninitiated in the gallery. They may not realise that Africa is the most highly-represented region among the ICC State Parties, nor may they know that the Court’s first three situation countries - the DRC, Uganda and the Central African Republic – referred themselves to the Court, and that Sudan and Libya were referred to the Court by the UN Security Council.

Côte d’Ivoire voluntarily accepted the Court’s jurisdiction, and along with Kenya, is one of only two states where the ICC Prosecutor initiated investigations of his own motion. Moreover, the ICC is currently conducting preliminary investigations in several sites beyond the African continent. Of course, some of those who believe the ICC targets Africa are aware of these facts, and still remain unconvinced.

Conspicuously absent from the courtroom were the individual victims - too numerate, impoverished and far away to be present when the person charged with being most responsible for their suffering was held to account. However, they were not forgotten. Sitting alongside the other officials were the victims’ legal representatives, whose role is to present the views and concerns of the victims, reminding us that the ICC offers not just a retributive but also a restorative approach to justice.

Throughout the trial, the victim’s legal representatives posed detailed questions to the testifying victims about their experiences as child soldiers in Mr Lubanga’s army, exposing the Court to the unique perspectives of those most affected by the crimes charged.

The legal representatives also filed a motion to expand the scope of the charges to include cruel and inhuman treatment and sexual slavery, in response to the evidence of sexual violence presented by the witnesses. Although this motion was ultimately unsuccessful, it left a clear imprint on the trial: reminding us that a court of law, while powerful, can never entirely satisfy the victims’ need for justice.

Just as glimpses of the ICC’s history were present in the courtroom, so too, were glimpses of its future.

The next phase of the Lubanga case was laid out before us: the Court will move on to considering sentencing and reparations, and in all likelihood there will be an appeal from the defence. More broadly, the legal arguments settled in the judgement will have resonance in subsequent trials in the ICC.

Taking a lead role in these trials will be Fatou Bensouda, who on Wednesday sat beside Mr Ocampo as Deputy Prosecutor, and in June 2012 will replace him as Prosecutor.

As Ms Bensouda is the Office of the Prosecutor’s Focal Point on gender, it seems reasonable to expect that gender-based crimes – which to some extent have already been addressed by the prosecution in other ICC cases - will receive increased attention when she takes the reins. As always, we must wait and see.

Rosemary Grey is writing her PhD on gender justice and the ICC in the School of Social Sciences. She attended the Lubanga verdict as part of her field research in The Hague.

This article first appeared in The Punch