Opinion As long as we move cargo by ship, the navy will need to control the sea 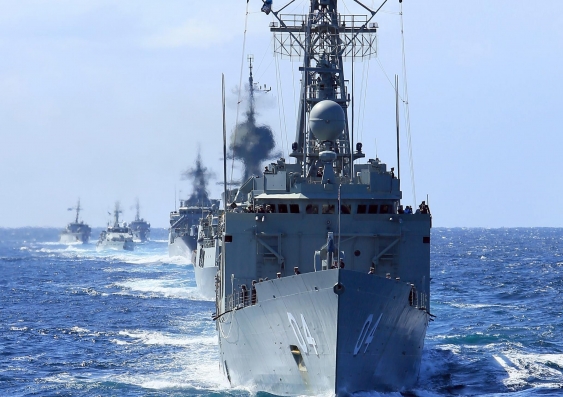 Firstly, the presence of the Australian fleet unit in 1914 protected this country against the threat of the German squadron in the Pacific, contrary to what is implied in the article. I have said elsewhere that the battle cruiser Australia was probably the best strategic investment that this country ever made. The dividend was paid on the day that the German admiral von Spee realised that he could no longer attack Australia's ports and coastal shipping.

The new Royal Australian Navy included submarines, but by themselves they could not have defended us against a well-handled German fleet. They would have been hard put on their own just to defend Sydney. It was the 12-inch gun, 26-knot, long-ranged battle cruiser which was the vital asset in 1914, because, no matter how or where the Germans approached, Australia could have caught them.

Furthermore, the Australian fleet was key to the Allied but Australian-led effort to roll up the German colonies and radio stations in the south-west Pacific, ensuring that there would be no bases to be used against us. Once the job was done in the Pacific, Australian warships were deployed around the world, mainly doing something that the navy has always believed is vital – protecting shipping.

This is what the navy still does and what it knows still matters. In the present day, we talk about "sea lines of communications". These are the paths that the ships take which carry more than 90 per cent of our international trade by volume. Those ships need protecting. And this is the point that White so often misses.

The modern world is founded upon our ability to move large amounts of material by sea quickly, safely and cheaply. Too many people do not understand this simple fact, perhaps because so much international human movement is by air. Without ships, the system stops. To give just one example, if the movement of fuel by sea into Australia were interrupted even for a few days, the consequences would be immediate and severe – and catastrophic if such interruption continued.

White has not been listening to the debate that is in progress over the need in Australia for a "school of maritime thought". He might be less ready to allege that all Mahanian thought is outdated if he considered some of Mahan's very prescient thinking on globalisation and its implications for the world. Maritime strategy is, and almost always has been, much less about fleet-on-fleet actions and much more about using the sea to move material – and trying to prevent others using it for that purpose.

White is completely wrong to suggest that the idea of trying to achieve control of the sea is obsolete. This is partly due to his continuing confusion of "sea control" with older ideas about "command of the sea" – when domination is so complete that there is no longer any threat at all. This idea effectively died in the late 19th century with the invention of the torpedo. But control of the sea accepts that the sea will be contested, that risks will have to be taken and that losses will be incurred.

The events of which White writes actually bear that out – in both the World Wars there was a protracted, bloody struggle at sea to ensure that ships continued to move back and forth to carry men and materials, not only for direct military reasons, but to supply national economies. Those struggles were battles of competing technologies, of development and counter-development. This is something which has marked warfare since the beginning of organised human existence and it is something that will continue in any future conflict.

White's lack of understanding of this two-sided coin is shown in his advocacy of precision guided weapons without attempting to explain just how those weapons will find their target. The longer the range and the faster that their prey is moving (and a modern warship can move at about 1000 metres a minute at top speed), the more precise and up to date the targeting solution needs to be. This means, effectively, that there needs to be a sensor looking at the target. That sensor can and will be a target as well, whether it is a manned aircraft, a drone, a satellite or something underwater. To make things like anti-ship ballistic missiles work, for example, satellites are needed, not only to carry the sensors – and there are real challenges there – but to allow the data to pass quickly and accurately.

What is not often enough explained about any conflict between a nation employing "anti access area denial" against another attempting to gain access, is that it will be a war of information, of attacks on sensors, communications and networks, as well as on platforms. Arguably, a nation which commits to "A2AD" creates almost as many hostages to fortune as its opponent. It certainly creates some of the same vulnerabilities in its own organisation. And, contrary to the advocacy of "cheap" systems in the article, setting up such defences may not be very cheap at all. The cost is not just in the platforms.

Finally, White attempted to damn with faint praise the state of the Royal Australian Navy and this, I think, also derives from his lack of understanding of modern naval technology and his tendency to focus on platforms and not what they carry, what they can do and – most critically - how they work with other elements. I was interested that he, of all people, should have included being "rather small" as an implied criticism, given his dislike of large warships. It is true that there are "rather old" ships in our inventory, but a look inside will show just how much ships like the frigate Sydney have been modernised over the years. The changes in the ship's computing power, in sensor capability and in weapons have been more than significant – they have been profound. And, newer, Australian-built and exciting in its own right, the frigate Perth now carries the Australian designed and built CEAFAR radar and associated combat system, with an extraordinary ability to detect and engage very fast moving missiles and aircraft.

Are these ships invulnerable? No. Will we risk losing them – and, more importantly, their crews - if we send them in harm's way against a sophisticated opponent? Yes, we will have to take that risk if the task to be done justifies it. We have always had to take that risk and our naval people have always accepted it. Will the navy work by itself? No, it will operate with other elements of the Australian Defence Force and almost certainly with allies and coalition partners – the need to protect shipping is something that we all share. Will we be surprised by what happens in any future major conflict? Undoubtedly, but until some other way is found to move large amounts of material internationally by any other means than a ship, we will have to achieve some degree of control of the sea, even if only to survive.

James Goldrick retired from full-time service in the Royal Australian Navy in 2012 as a Rear Admiral. He is an Adjunct Professor at UNSW Canberra.

Dealing fairly with East Timor is not charity, but justice