Our centenary observances tend to be monumental wastes of time and money and we are about to do it all again with the Great War, argues Jeffrey Grey. 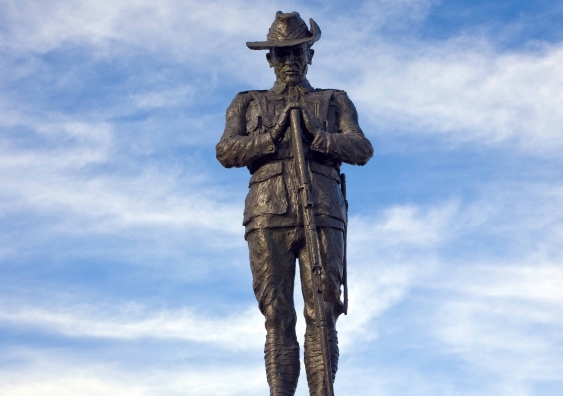 OPINION: If Australia's centenary observance is little more than a four-year long Dawn Service, replete with all the hackneyed cliches and self-serving and a-historical mythology trotted out each Anzac Day, it will be a monumental waste of time and money.

Do you remember the non-event that was the Centenary of Federation? The mostly top-down calendar of celebrations and commemorations of the Second World War organised as "Australia Remembers" ended with the frankly bizarre Flame of Freedom dance performance in Brisbane on VP Day 1995. It also produced the usual range of tacky souvenirs, forgettable stamps from Australia Post and the usual arguments about who and what were to be commemorated and why one or another had been "slighted," "ignored" or "forgotten" - which usually gets a good adjectival workout on such occasions.

And then there was White Australia’s tin-ear approach to the bicentenary in 1988 replete with First Fleet re-enactment and corresponding (and utterly foreseeable) indigenous protest.

I fear we are about to do it again: that is, take a significant historical event – in this case the Great War of 1914-19 – and trivialise, commodify and sanitise it until anything and everything of enduring value is leached out of it.

Whether we see the Great War, particularly the campaign in the Dardanelles in 1915, as nation-defining events in this country’s early national history and development, or as a serious, even tragic, distortion of the trajectory and potential of a newly-emergent, socially-progressive nation, it looms large in any interpretation of who we are as Australians and why we came to be that way.

In my view that makes the Great War important and makes the observance of the Centenary over the next half dozen years a matter of more than simple curiosity.

Handled in a sensible and balanced manner the Centenary could provide a moving and generous commentary on who we are: an appropriate and solemn opportunity to commemorate the sacrifice and service of a generation of ordinary Australians called on to do sometimes extraordinary things in often horrendous circumstances, and an unbeatable and unrepeatable chance to educate new generations of Australians about war’s realities in general and this war’s impact on the course of the 20th century specifically.

Public and media attention so far has focussed largely on the arrangements for Anzac Day activities at Anzac Cove in April 2015. This was always going to end badly from the moment the Federal government announced that attendance would be artificially limited.

Whatever the number of people attending, this will be an event of the moment (as it is each year), with little or no enduring impact or significance for anyone other than those there. And in entirely predictable ways, while money is being spent – more than $80 million on current plans – opportunities are being missed left, right and centre.

So, $6.5 million dollars is to be spent on an Anzac interpretative centre – at Albany. Not at Anzac Cove, or at a site on the Western Front, closely identified with Australian efforts, in the manner pursued by both the Canadians at Vimy Ridge and South Africans at Delville Wood. A local grants scheme offering $100,000 per electorate will doubtless do some good at the local level – restoring memorials and local honour boards, for example – amid the pork barrelling, but the impact overall will be lessened precisely because it is localised.

As for what else is intended, we await the eventual release of the recommendations of the Anzac Centenary Advisory Board, and the announcement of whether there will be any real resources placed behind whatever it is they have suggested and the government has decided to accept.

What is lacking thus far is some over-arching and defining view of what it means and why it matters. The message is already garbled, with the centenary of the Great War also required to carry the notion of "a century of service" by members of Australia’s armed forces – once again, a perfectly worthy idea but one clearly at odds with the centenary nature of the up-coming events.

Professor Hew Strachan at Oxford hit the mail squarely in a recent article in the London Telegraph criticising the British government’s approach, which is very similar in key respects to our own: "The centenary of the First World War must not be Remembrance Sunday writ large . . . the big challenge is not the principle of commemoration but the practice of education".

To date, the focus of much of the public commentary has been Gallipoli; the Western Front gets some subordinate consideration, Sinai and Palestine, the war at sea and so on, virtually nothing.

Commemoration is well and good, but only if it results in enhanced understanding, and that is first and foremost a function of education in its broadest sense.

Jeffrey Grey is Professor of History at UNSW Canberra and Director of the Australian Centre for the Study of Armed Conflict and Society.