In the midst of the Trump era, the timeliness of Belvoir's latest production shouldn’t be understated, writes Bryoni Trezise. 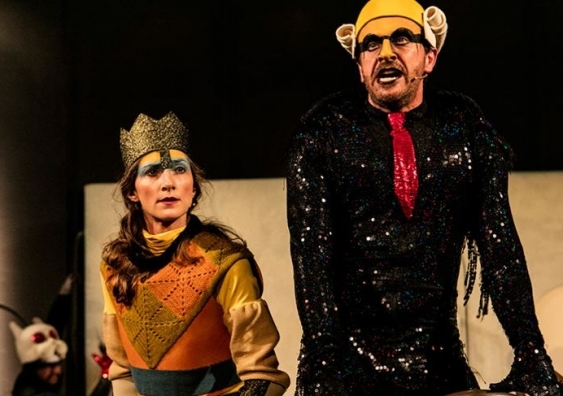 There has been a nuclear event. The grid is down. The radio is out. Most are dead, and those who remain huddle in groups with rifles cocked, or wander, gasping, through the apocalypse. Survivors are counted and named in travelling ledgers. Campfire stories are making a comeback.

This self-described “post-electric play” Mr Burns, written by US-based playwright Anne Washburn and directed by Imara Savage at Belvoir St Theatre, begins mid-memory, as a group of survivors recall a Simpsons episode. The episode, Cape Feare, references Martin Scorsese’s 1991 film Cape Fear, a remake of a 1962 film of the same name, which in turn was based on a 1957 novel. The original episode was a parodic thriller, evoking irrational, seething terror in disenfranchised middle America.

In the play’s traumatised, post-electric world some “can’t manage the dread” that comes with the ache of radiation sickness, some are in wordless despair that cities have “burned through”. Others declare rage at the incompetence of power. The Simpsons appears for these survivors less as a pot of humour in dark times, and more as a glowing screen memory whose words and ideas acutely chart how they got to be where they are.

Others have noted the uncanny prediction of The Simpsons in forecasting Donald Trump would become president; the prophetic Mr Burns feels similarly uncomfortably close.

The work traverses forms in three acts, inviting us to make connections across large gaps in time. The first act envisages the realism of an aftermath. The second act with different characters (“seven years later”) shows us a rehearsal of a repertoire that seems central to the new economy. Simpsons’ lines have value. Episodes, well remembered, draw a crowd. Theatre is once again important! It is thrilling to see theatre put into the centre of things in such a deliriously dystopian way.

And yet, everything here is a little off-key. The players work at commercials which seem more like sitcoms. Their stage mechanics are almost slapstick, evoking the ventriloquy of early sound film, or the inherently theatrical logic of early TV. While The Simpsons popularised parody and pastiche as hallmarks of the 1990s, in Mr Burns, theatre replays that mash-up in a live reboot, taking it to a different kind of endpoint. Scenes mix iconic jingles with hit anthems: Lady Gaga meets McDonalds meets the “zoom zoom zoom” of Mazda. Everything is a mis-memory, a partial account. Even dancer Maddie Zeigler’s signature blonde hair appears and disappears without context. 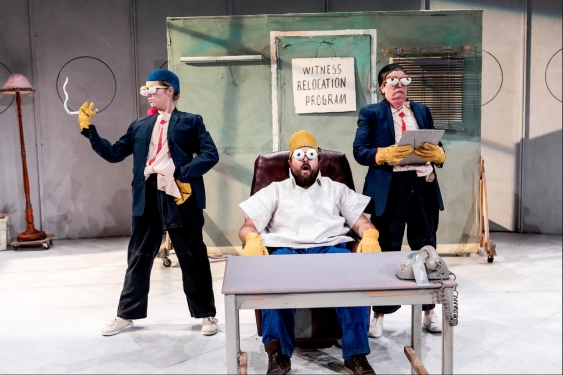 This stoic, desperate nostalgia of the players realises biblical proportions when Act Three casts us 75 years forward into a scene of monastic reverence. The stage, created by Jonathan Oxlade, transforms into a kind of religious showspace. Humanity appears to be thriving. What began as a drama becomes a dazzling, sequined musical, with a score by Michael Friedman, which combines medieval imagery with a futurist bent to unsettling effect. While it does seem ridiculous, it is also fitting. The work is dizzyingly off-kilter in exactly the right way. Part ritual, part spectacle, theatre appears as the salve for the end-of-things.

The actors are collectively on pace throughout this work, and here their excellence rises to a new level of camp. Brent Hill’s depiction Matt as one of the survivors in Act One is witty early on; later, Paula Arundell’s solo as Quincy, Esther Hannaford’s vocals as Bart, and Mitchell Butel as Mr Burns energise this world. It is equal parts nostalgic and ironic. At times it is hard to place the tone of what we are in fact seeing, and harder to catch all the pop culture rip-offs – but entertainment seems to be the point. As one character puts it, “Meaning is everywhere. We get meaning. It’s for free”.

Marvin Carlson famously wrote about theatre as a kind of memory machine, haunting us with what has come before it by re-enacting and reworking the past – that play, done before; that role, played by another actor. Carlson published The Haunted Stage in 2001, and even then he possibly didn’t anticipate the speed with which the digital would change how we view and consume entertainment. He also didn’t consider just how useful theatre can be for re-purposing those other televisual archives that underpin our cultural memories in ways that are not always apparent.

The timeliness of a play like this in the midst of the Trump era shouldn’t be understated. It is ironic that this fictional post-apocalyptic society hearkens back to a TV series that satirised the Middle America that the Trump administration now appears to so heartily champion. In this sense, The Simpsons on TV may be well and truly over for the characters in Mr Burns, but its future is here, now. We are in it.

Mr Burns: A Post-Electric Play is at Belvoir St Theatre until 25 June.

This article was first published on The Conversation. Read the original article.