Opinion Murdoch’s World – the last of the old media empires

David Folkenflik’s book is a well written account of some of the most dramatic events surrounding Murdoch’s career and impact, but there are some odd absences, writes David McKnight. 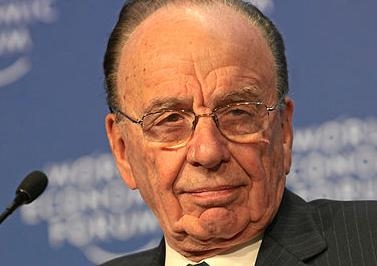 REVIEW: The eruption of the News International phone hacking scandal has caused significant problems for Rupert Murdoch and his business empire. It forced him to close his big money spinner, News of the World, and to withdraw his takeover bid for the enormously profitable BSkyB satellite TV broadcaster.

More recently, he’s had to split the mighty News Corporation into two companies.

All of this has spawned a veritable tsunami of Murdoch books, including David Folkenflik’s Murdoch’s World. It’s a well written account of some of the most dramatic events surrounding Murdoch’s career and impact.

Folkenflik argues the hacking scandal reflects a corporate culture at News, a culture in which there is a contempt for rules which govern the rest of us.

In Britain this took the form of no-holds-barred journalism in which cops were bribed and the law systematically broken. In Australia this culture of contempt for rules translates into a disregard for any balance when reporting certain issues or in targeting Murdoch’s enemies du jour.

All of this is a reflection of the group think which Murdoch sponsors among his editors and executives that they are rebels and enemies of the “establishment”. As Folkenflik says, this is a corporation which “has accumulated more influence than any other media company in the world and yet remains convinced of its status as an outsider”.

But there are some odd absences. Murdoch’s obsessive support for the invasion of Iraq saw him mobilise his battalions of television and print outlets in support of George W. Bush. It is a text book example of the kind of power Murdoch can summon, yet this is barely mentioned.

Nor does he mention Murdoch’s role as a long time funder of right-wing causes and think tanks. Folkenflik does better in highlighting that other major issue of our time – climate change.

In the US and Australia, Murdoch’s media is the main public sources of climate scepticism. And except for a small window in which he veered off course, Murdoch himself has been happy with this.

Another strength is the book’s account of the meaning of Murdoch’s takeover of the Wall Street Journal. This includes the struggle within the newspaper over whether to publish critical stories about phone hacking.

A London-based WSJ reporter had uncovered new evidence that News of the World had openly referred to hacking in a story but this was dropped in later editions of the paper, presumably on orders of one of its chiefs. This raised the obvious question about the prior knowledge of the paper’s chiefs of the criminal act.

Folkenflik reports that WSJ editor Robert Thomson “tried to kill the story several different times”. Eventually, however, it was published. Folkenflik also convinced the past editor of the New York Post, Ken Chandler, to open up about the New York Post’s reporting on issues of race and homophobia.

Much speculation has focused on the succession. Who will run the global media giant after Rupert? When Murdoch himself is asked this, he points out mischievously that his mother lived to 103.

He plans to be around for a lot longer and there is no reason to think he is not healthy and fit. But the succession also raises issues about the beneficiaries who will ultimately inherit shares and run the company – the children by Anna and Rupert Murdoch.

This is a group of people who have quite different outlooks on the world. Elisabeth is the most independent minded and politically progressive. She supported Obama and is critical of the politics of Fox News. She didn’t endear herself to other members of the family by saying that James Murdoch and Rebekah Brooks had “fucked the company”.

For his part, James Murdoch also takes his distance from his father but in a more measured way. He is an American-style centrist liberal who, for example, understands very well the dangers of climate change. Lachlan Murdoch is a man in his father’s image. He is on the right – under his leadership the New York Post hysterically beat the war drum in favour of the Iraq invasion.

The division of the company into two parts (one mainly newspapers and books and the other TV and movies) may make it easier for them to divvy up the inheritance.

But Rupert will be around for quite some time to come, I think.