Piano virtuoso Daniel Guo is one of an elite group of students merging their science and musical talents in a unique dual degree. 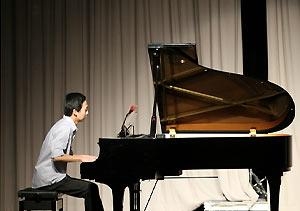 Daniel Guo is happy to be studying his two favourite subjects

Piano virtuoso Daniel Guo is one of an elite group of students merging their science and musical talents in a unique dual degree.

Guo, who holds a prestigious Licentiate Diploma in Music and topped the state in Music 2 and Extension, is one of only four students to be offered a place in the Bachelor of Music/Bachelor of Advanced Science program.

He said his reason for choosing the program was simple: it allows him to study his two favourite subjects.

“I’ve loved the mathematical side of science combined with the creativity of playing piano for 12 years. I like immersing myself in a maths problem and then walking over to the piano and playing some Chopin – the mix of academic and creative subjects suits me,” he said.

The Sydney Technical High School graduate has been playing piano since he was five and has been performing solo and with ensembles since primary school. He performed a four-minute piece by Spanish composer Manuel De Falla for his degree audition.

“I’m not sure if I’ll find a career that involves both disciplines but research has shown there is a definite relationship between music and science. I guess I’ll decide as I go along which one I want to pursue.”

Guo recieved an ATAR of 99.95 and has been awarded a UNSW Scientia Scholarship worth $10,000 per year for the duration of his degree. The scholarship is offered to all students who achieve an ATAR of 99.90 or above.

Arts & Social Sciences
School of Arts and the Media