Actions as simple as smiling and saying hello in the supermarket can have a powerful influence on communities, according to social researcher Dr Hugh Mackay. 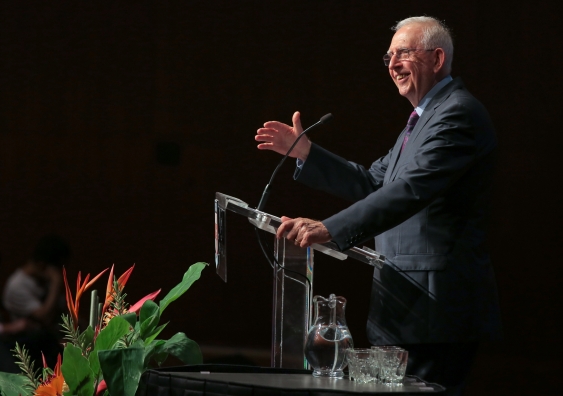 You think people aren’t as friendly as they once were… Then, be more friendly,” Dr Mackay told the audience in UNSW’s Clancy Auditorium for the Gandhi Oration in January.

“Start making eye contact with strangers. No, do better than that, start smiling and saying hello to people at the bus stop, in the lift, in the checkout queue and especially in the street or the apartment block where you live.”

The very act of engaging with others, and being alert to the possibility that someone needs your help or attention, would help to determine the big picture, he said. 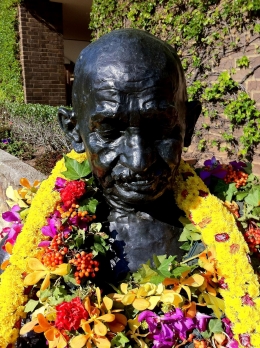 Sponsored by Tata Consultancy Services, the annual Gandhi Oration commemorates India’s Martyrs’ Day, the anniversary of Mahatma Gandhi’s assassination on 30 January 1948, and is delivered by a person whose life work exemplifies Gandhian ideals. The oration was preceded by a remembrance ceremony before the Gandhi bust on the University’s library lawn.

Dr Mackay has had a 60-year career in social research. For 25 years he produced a social research quarterly called The Mackay Report. He was a founder of the St James’ Ethics Centre and is currently a patron of the Asylum Seekers Centre and an honorary professor at Charles Sturt and Wollongong universities.

Speaking on the topic The state of the nation starts in your street, Dr Mackay outlined how Australians are in the grip of anxiety and depression, concerned about the state of contemporary Australia and feeling powerless in the face of events here and overseas.

“We can have a powerful influence on the communities we belong to. How we contribute to these miniatures will help to determine the big picture.”

Rising income inequality, declining respect for institutions and those who lead them, the rate of technological change, the loneliness born of shrinking households, the scramble for privacy and security in high-rise living, and the isolation wrought by our reliance on electronic communication all exerted great pressure on the stability and cohesiveness of communities, Dr Mackay said. As a result, “we are showing signs of a disturbing retreat from the values we were once famous for”.

But rather than relying on leaders, who many have lost faith in and no longer trust, it is up to individuals to engage with the life of the local community and become good neighbours.

“We can have a powerful influence on the communities we belong to,” he said. “How we contribute to these miniatures will help to determine the big picture.”

I wonder what Gandhi would have made of Australia in 2017 – a place many people who live here regard as the best country in the world.

It’s true we have a robust parliamentary democracy.

We have our spectacular beaches. We have a well-educated population, with unprecedented numbers of students enrolled at our universities. This is a place where we have managed to create a harmonious society out of extraordinary cultural and ethnic diversity, bringing together people from almost 200 birthplaces around the world.

All is clearly not well. We are a society in the grip of epidemics of anxiety, obesity and depression. We are further from egalitarianism than we were 50 years ago. We are showing signs of a disturbing retreat from the values of an open, tolerant society for which we were once famous.

How did this happen?

Where did this edgy, anxious, too-violent society come from, this uneasy blend of arrogance and timidity?

Over the years, my research has consistently identified “loss of community” as one of the most common concerns among contemporary Australians. That concern is often expressed as a regret that local neighbourhoods are not functioning as well as they once did. “We don’t know our neighbours” has become a cliché of contemporary urban life. That is never said with pride or pleasure: feeling like a stranger in your own street is bound to fuel your insecurities.

A disturbing piece of research from Edith Cowan University has shown that only 35% of Australians say they trust their neighbours. Clearly, that could not possibly mean 65% of neighbours are untrustworthy – what it must mean is that most people in our society don’t know their neighbours well enough to have learnt to trust them.

It’s easy to complain about “the state of the nation” and to wish that a leader could make everything right.  But as part of the general decline of trust in politics, our esteem for the current crop of leaders has plummeted. (Both Trump and Brexit can be partially interpreted as reactions to similar disenchantment in the US and UK.)

In one way, that might be no bad thing. It might encourage us to look differently at the situation and take matters into our own hands by embracing the idea that the state of the nation actually starts in the street where you live.

We can have a powerful influence on the state of the various communities we belong to – in the neighbourhood, the workplace, the university, the church or other faith community, the sporting association, the book club or other community organisations. How we contribute to the miniatures of life in our own family, street, suburb or town – will ultimately help to determine the big picture.

We all know how to act like neighbours when there’s a crisis – floods, bushfires, storms, or horrific events like the carnage in Melbourne’s Bourke Street in January. Why does it so often take a crisis to remind us of our responsibility to the other members of our community?

You think people aren’t as friendly as they once were – that, especially in Sydney, avoiding eye contact with strangers has become an art form?

Then be more friendly! Start making eye contact with strangers. No, do better than that, start smiling and saying hello … at the bus stop, in a lift, in the checkout queue, and especially in the street or apartment block where you live. You don’t know your neighbours? Try knocking on the door and introducing yourself. Become the kind of person who is always alert to the possibility that someone needs your help or attention.

The full Gandhi Oration can be viewed at newsroom.unsw.edu.au.