NATO must adapt to evolving threats 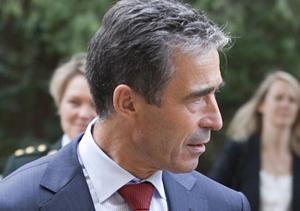 “NATO’s purpose is to secure the territorial defence of our 28 members, but today we realise that territorial defence may start far beyond our borders and require international partnerships with like-minded countries such as Australia,” Mr Rasmussen told a roundtable discussion hosted by UNSW.

The meeting was the final stop on Mr Rasmussen’s official Australian visit aimed at increasing practical cooperation on new and emerging security challenges. Also on hand was Australia’s Ambassador to NATO and the European Union, Dr Brendan Nelson.

Mr Rasmussen highlighted Australia’s role in Afghanistan as a model partnership. “Australia is the largest non-NATO contributor engaged in Afghanistan, first and foremost to prevent Afghanistan from becoming once again a safe haven for terrorists.”

“We are in the midst of the process of handing over responsibility for security to Afghani forces province by province, to be completed by the end of 2014.

“We will stay committed after 2014 not in a combat mission but in a support mission to ensure Afghani security forces can maintain security in their country. We appreciate very much that Australia has committed itself to this operation past 2014,” Mr Rasmussen said.

The former Danish prime minister stressed NATO’s partnership with Australia should not be seen as a threat to others in the region.

“Our presence in the Asia Pacific region in not directed against anyone. On the contrary the purpose is to promote peace and security. We have no intention of establishing a permanent presence in the region,” he said.

Dr Nelson said it was in Australia’s interest to cooperate with NATO. “We shouldn’t hesitate to do what is in our interest and the interest of the region because of how other countries might see it,” he said.

Asked whether NATO would replicate its intervention in Libya to end the bloodshed in Syria, Mr Rasmussen said Syria was a more “complicated case”.

“NATO led the intervention in Libya on the basis of a clear UN mandate to protect the civilian population and we had wide support from other countries in the region.

“This is not the case in Syria. Even the Syrian opposition does not want external intervention,” he said.

“The best way forward is to find a political solution based on the [Kofi Annan-brokered] six-point plan, and the international community through the UN can send this message to the Syrian government to recognise the legitimate concerns of its people.”

The roundtable was organised by UNSW International and attended by students from UNSW Canberra, UNSW's Faculty of Law, and School of International Studies, and Sydney University’s US Studies Centre.