Opinion No matter who is elected, more work remains on women's rights and Indigenous issues

Some of the Coalition government's initiatives on women and Indigenous issues have been more successful than others. Labor is promising much more. 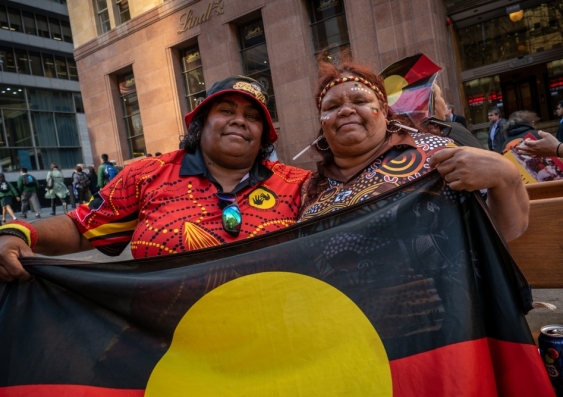 The Coalition government has rejected the Uluru Statement’s call for an Indigenous voice to Parliament, just one of many disappointments for Indigenous peoples. Image from Shutterstock

For most of the Coalition’s time in office, gender justice concerns have received scant attention across the board. Former Women’s Minister Michaelia Cash, in fact, is probably better remembered for her sexist slurs on Bill Shorten’s female staff than any major policy announcement.

Since stepping into the minister role in 2017, Kelly O’Dwyer has clearly worked to improve the government’s profile and performance and attempted to develop a coherent policy agenda.

On her watch, the government met its goal of reaching gender parity on government boards and announced a A$109 million women’s economic security package focused on workforce participation, economic independence, and expanding women’s earning potential. While this was welcome, some commentators criticised the relatively small funding package, especially given the scale of the problems it set out to address.

Politically, the Coalition’s emphasis on support for domestic violence survivors in the package was a sign it was still playing catch-up after it threatened to strip A$35 million in funding from frontline legal domestic violence services in the 2014 budget. Earlier this year, the Morrison government also committed to spending A$328 million to implement the National Plan to Reduce Violence against Women and Their Children, a program commenced under the Rudd and Gillard ALP governments.

Other women’s issues have been more problematic for the Coalition. For instance, the ParentsNext program has been been the subject of a Senate inquiry over allegations of discrimination on the basis of sex, race and family type. Critics also point to the lack of concrete action on women’s homelessness. Reforms to the childcare system implemented in 2018, meanwhile, are proving a bureaucratic nightmare for families with insecure, unpredictable or contract-based jobs.

The Coalition government has also notably failed when it comes to increasing the number of women in its ranks.

Across both houses of parliament, women comprise just 22.9% of

and only 9.5% of National Party representatives. Women have also held a small proportion of senior Cabinet positions since 2013 (10% under Tony Abbott, 21% under Malcolm Turnbull, and currently 30% under Scott Morrison). In addition, both Coalition partners continue to resist the introduction of gender quotas for parliament.

These numbers should improve if Labor wins the May election. With women currently making up 46% of Labor’s numbers in parliament, the ALP is close to reaching its goal of gender parity. A strong swing to Labor may well help it reach its goal of 50-50 female representation – or more.

The ALP has already announced a detailed women’s policy platform, claiming it will put gender at the centre of decision-making. This includes the reintroduction of “gender policy machinery” to government, meaning Labor pledges to conduct a gender impact assessment on all policy decisions and cabinet submissions, and release an annual gender budget statement.

Tanya Plibersek, the deputy leader and shadow women’s minister, has also made several key announcements, including new measures to tackle the gender superannuation gap and increase childcare funding. Most controversially, the ALP has outlined a plan to deliver a National Sexual and Reproductive Health Strategy, which will include decriminalising abortion and providing access to termination services.

While history shows that ALP governments tend to have a stronger record than Coalition governments in advancing women’s rights, it would be wrong to be complacent. Past Labor governments have proved inconsistent on women’s issues, for example, cutting single parent pensions and keeping women asylum seekers in detention.

This means Australian women must continue to put pressure on both sides of politics to fully realise their rights.

The Coalition has had a clear focus on employment and business development as the key platforms for improving Indigenous outcomes over both terms of its government, but its top-down approach and failure to genuinely work with Indigenous peoples and organisations has led to few successes.

One of the key components of the government’s policies – and one of the most controversial – has been the Community Development Program (CDP), instituted in 2015. Although the program was championed by the Coalition as a key way of improving rural employment in Indigenous communities, it immediately came under fire and became the subject of a Senate inquiry in 2017.

According to testimony at the inquiry, the success rate in getting Indigenous people into full-time or part-time work has only been about 10%. The program has also been overly punitive, with more than 350,000 fines issued to some 33,000 participants for lateness or missed appointments.

Another contentious Coalition-led initiative has been the so-called “cashless welfare card”, which has been trialled in various locations across the country. The government claims the card will reduce domestic violence and crime, and improve the welfare of children and families. But an evaluation of a similar program in the Northern Territory could not find “any substantive evidence of the program having significant changes relative to its key policy objectives”.

Equally controversial has been the Indigenous Advancement Strategy (IAS), one of Tony Abbott’s key policy initiatives. In 2016 a Senate inquiry found that less than half of successful applications had gone to Indigenous organisations the year before. Last November, it was also revealed that A$500,000 of IAS money had been given to non-Indigenous industry groups to counter Aboriginal land claims.

Perhaps most disappointing to Indigenous peoples, however, has been the lack of support in the Coalition government for the Uluru Statement’s call for an Indigenous voice to Parliament. Prime Minister Malcolm Turnbull dismissed the statement as an unworkable attempt to create a “third chamber” of parliament. His successor, Scott Morrison, echoed this view after coming to power.

“Scott Morrison needs to immediately come clean with #FirstNations people about his real position on a Voice, having [already] rejected the proposal that came from Uluru,” Mr Dodson told NITV News.  https://t.co/pRx8uabNMO #VoicetoTheParliament

While both parties are committed to Constitutional recognition of Indigenous peoples, the ALP has promised to hold a referendum on enshrining an Indigenous voice to parliament in the Constitution. Labor has also pledged to establish a Makarrata Commission to supervise a truth-telling and agreement-making process formed between governments and Indigenous peoples.

It appears unlikely the Coalition will support either measure as part of its platform.

The ALP has also guaranteed it would comply with the Racial Discrimination Act (RDA) and affirmed its support for the UN Declaration on the Rights of Indigenous Peoples. The Coalition, meanwhile, has long expressed its desire to amend or abolish the RDA and has been largely silent on the UN declaration.

The ALP has also committed to support the National Congress of Australia’s First Peoples as the peak national representative body for Indigenous peoples after it had its funding slashed by the Coalition.

Both parties have aligned behind the Closing the Gap targets, but the ALP has added three extra targets: to increase Indigenous participation in higher education, improve access to services for Indigenous peoples with disabilities, and reduce incarceration and victimisation rates in Indigenous communities.