The salary gap between men and women in NSW is narrowing, according to the second annual report on the status of women released at UNSW today. 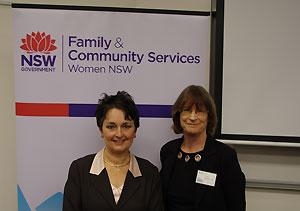 The salary gap between men and women in NSW is narrowing, according to the second annual report on the status of women released by the Minister for Women at UNSW today.

The report shows the average hourly earnings of women compared with men has increased from 88% to 92% since 2012.

“If any further evidence is required to turn the tide on gender equality, this is it,” Ms Goward told the UNSW audience that included one of Australia’s foremost scientists and 2013 NSW Woman of the Year, Dr Cathy Foley.

Women in NSW 2013 also shows that more women are engaged in permanent part-time work instead of casual part-time jobs and that participation in traditionally male-dominated roles had crept forward, with the percentage of women commencing technical and trade apprenticeships increasing from 16.2 to 17%.

The Minister expressed concern over girls’ education choices, with only 31% matriculating from NSW high schools with science, technology, engineering and maths subjects compared with 45% of boys – a wider gap than last year.

“Girls narrow subject choices pose a risk to the Australian economy and deny them a whole range of occupations,” she said. “This echoes a grim theme of wasted potential.”

Ms Goward identified domestic and family violence and women’s mental health as areas where there is room for improvement assuring the audience there would be funding provisions to address domestic violence in the upcoming state budget.