Any end to the fighting in Syria will have to be politically driven and it must be the Syrians themselves who decide the outcome, writes Anthony Billingsley. 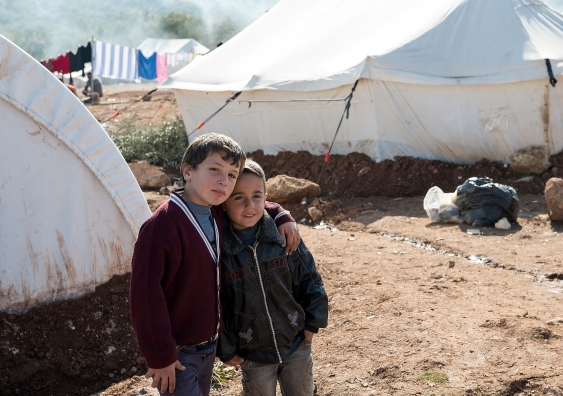 Two boys stand in front of tents at a camp for displaced persons in northern Syria. Image: iStock

OPINION: Australian Prime Minister Malcolm Turnbull recently raised, as part of a political solution to Syria’s ongoing violence, the possibility of partition. In doing so, he joined a significant body of opinion – especially among US neoconservatives – that promote the idea.

Partitioning has a certain superficial appeal. Syria is broken, and it may not be possible to put it together again – even as fresh peace talks show glimpses of progress. Separating the competing groups and enclosing them in internationally mandated borders seems to make sense. However, when considered more seriously, the idea loses its gloss.

A quick trek through history

Modern Syria is no stranger to partition. At the end of the first world war and following the Sykes-Picot Treaty, the British and French set out to cannibalise the Ottoman Empire.

Britain had promised the empire’s Syrian provinces to the Hashemites, the clan that had led the 1916-18 Arab revolt against the Ottomans. But instead, the two countries seized the area. France took control of the northern part of Syria but Britain ensured that France did not get control of the oil fields in what is now the Mosul area of Iraq.

In southern Syria, Britain oversaw the creation of Jordan and Israel and the destruction of Palestine – to the dismay of Arab nationalists.

In 1938, France ceded the area around Alexandretta (Iskanderun) to Turkey to secure Turkish support in the coming conflict with Germany. It separated from Syria the state of Lebanon in 1941 in order to control the increasingly nationalistic and restive majority Sunni population.

To the same end France also favoured minorities – particularly the Alawites – in the Syrian armed forces and government.

Relations between Syria’s communities need not have been destroyed irreparably by the last five years of fighting. Syria has always been characterised by minorities. These groups have been objects of political manipulation by European powers since at least the 19th century and have, from time to time, been subject to persecution.

However, Syria’s overriding ethos – especially since independence – has been of communal harmony. There are many reports of Christians and Muslims providing refuge for each other. Around one million Sunnis have found shelter in the Alawite heartland around Latakia and Tartous.

It is likely that the majority of Syrians, wanting no part in the violence and proud of their country’s polyglot past, would like to rebuild a state based on tolerance and diversity and would resist being forced into exclusivist and impotent statelets.

Throughout its turbulent history, the voice of the Syrian “people” has rarely been heard. But there is evidence of widespread support for the region’s unity – even under Ottoman rule.

The failure to give Syrians a voice has continued to the present day. Decisions about whether and who to bomb, and about who might participate in negotiations over the country’s future are being made in the US and Russia as well as Saudi Arabia and Iran – not in Syria itself.

The latest attempt at negotiations is no different. Saudis dominate the so-called “Higher Negotiation Committee”, which is in competition with groups set up in Damascus and the Syrian Kurdish area. It cannot be regarded as representative. But even it is still operating on the basis of a unified Syria.

It is hard to imagine what a partitioned Syria would look like. Possibly, there would be Alawite and Druze areas. Perhaps states would be created based on Aleppo and Damascus.

Would there be a state run by Islamic State or Jabhat Al-Nusra? If not, who would run the exclusively Sunni state?

Where would the majority of reasonable Syrians live? How would the millions of refugees and displaced people be accommodated?

What would the partition of Syria mean for its neighbours? Israel might benefit from the removal of a significant state on its border. But could Lebanon survive in its current form, or would it collapse into Shi’a, Christian and Sunni statelets? Would Jordan, an inherently weak and vulnerable country, withstand such disruption? It is only a few generations ago when Hashemites ruled in Damascus (and Baghdad).

There is no guarantee that a partitioned Syria would create a more stable environment. Many Syrians would reject partition and attempt to reverse it. Other Arabs might resent such an assault on the heart of Arab nationalism.

The solution to the Syrian crisis is not yet apparent. There are some ideas, though, that the international community might consider. The end of the fighting will have to be politically driven and it should be the Syrians themselves who decide the outcome, but the outside world can and should help.

The major players should stop meddling by arming and funding the fighters and help create an environment in which Syrians committed to political solutions can work towards a new political system based on compromise. Such ideas seem a long way from being considered.