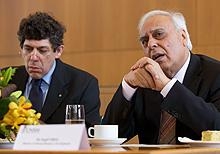 India's human resources minister has signalled Australia's universities have a strong role to play in his country's growing need for quality higher education.

Minister for Human Resource Development Kapil Sibal visited UNSW to meet senior representatives of Australia's higher education sector for a round table discussion on the development of a long-term "Knowledge Partnership" between Australia and India.

Mr Sibal said there was a mismatch between education demand and supply in India, where 546 million people are aged under 25.

"Enormous development opportunities have opened up in education," he said.

"We know there are institutions of very high quality in Australia and we would like to partner with you in this national endeavour."

UNSW Pro-Vice-Chancellor (International) Jennie Lang said the discussions, which included representatives of the Go8, Universities Australia, the Australia-India Institute and the federal government, would contribute to "a much more strategic framework for Australia to engage with India" in education.

Among initiatives discussed were moves to increase the number of Indian students completing PhDs in Australia and possible collaboration with one of 14 proposed Indian "innovation universities" in the area of energy research.

During his visit Mr Sibal presented a bust of Indian independence leader Mahatma Gandhi, a gift to UNSW from the Indian government and people. The bust will be placed on campus in the Morven Brown courtyard later this year.

Mr Sibal's visit to UNSW followed a meeting with Deputy Prime Minister and Minister for Education Julia Gillard where both signed a Joint Ministerial Statement confirming a commitment to expanding cooperation on education between Australia and India.