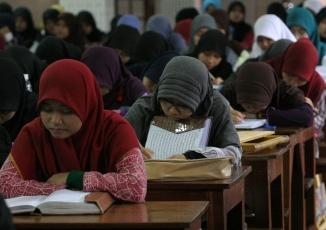 OPINION: For news editors, this is a dream story – an outlying part of a democratic and moderate Muslim-majority country proposes something out of the dark ages. Under the plan put forward by the education board of Prabumulih district in South Sumatra, Indonesia, girls attending SMU or senior high (which is equivalent to year 10-12) would have their hymens examined each year in tests using public funding.

The criticism has focused on the glaring unfairness of the planned “virginity tests”, and the questionable premises on which the move is based, as the presence or lack of a hymen is no indication of sexual activity.

The tests ignore the plight of female victims of sexual assault, and young men’s access to a free education won’t be dependent on such invasive examinations – sending a very problematic message about the type of behaviour and standards that are acceptable for Indonesian males, in contrast to Indonesian females. The sexist, ignorant and humiliating nature of the planned tests has been the most obvious talking point in media reporting of the story.

What’s been missing from much of the coverage is the fact that social mores have changed markedly in Jakarta over the course of a generation or two.

Prabumilih is a small district by Indonesian standards, and challenges to traditional values are felt keenly in the country’s more conservative rural areas.

On the surface, Indonesian society still errs on the side of conservatism – public displays of affection are frowned upon, and the fallout from sex scandals is severe. However, premarital sex is on the rise even if it is outwardly condemned. More young Indonesians are sexually active, and more couples are involved in de facto relationships.

If virginity is not the huge issue that it once was in Indonesia (at least privately), what exactly is the school board is trying to achieve? The district in which the proposal is being put forward has been described as one where promiscuity is rampant. Itseducation chief says the tests are for the girls’ own good, and will combat prostitution and discourage pre-marital sex.

The “virginity tests” illustrate the tendency to blame or punish Indonesian women only for more liberal attitudes to sexuality. They also illustrate the tension between tradition, modernity, secularism and morality in the world’s largest Muslim majority nation.

National politicians have suggested investing in religious education to teach students about morals, instead of threatening them with hymen examinations.

An education expert at a university run by the country’s second largest Islamic organisation says a comprehensive sex education program (looking at the health risks that accompany promiscuity) would be more effective in reducing premarital sex.

On two previous occasions in Indonesia harsh criticism caused plans to subject high school students to “virginity tests” to be scrapped. Hopefully this plan will go the same way – as one education activist said, “perawan tidak perawan berhak mendapatkan pendidikan” (virgin or no virgin, all girls have a right to an education).

Dr Nasya Bahfen is a Senior Lecturer in the Journalism and Media Research Centre, UNSW. 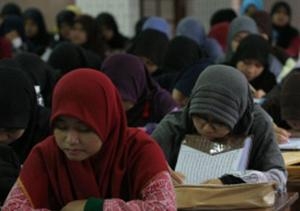