Opinion PM's role for women is not such a joke

Tony Abbott's role as Minister for Women might just work to our advantage if he takes the position seriously and isn't just window-dressing, argues Lindy Edwards. 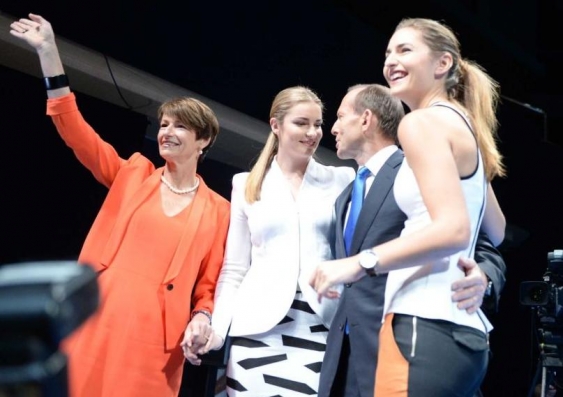 OPINION: It might work out to our advantage if Tony Abbott takes the position seriously.

Tony Abbott's appointment of himself as the Minister for Women may actually work out to be better for him and us than it first appears.

It is highly likely that Abbott decided to embrace the role as a media strategy. He knew he was going to cop flak for the lack of women in cabinet, and he would not have wanted to make matters worse by scrapping or demoting the role. To make matters worse, with Julie Bishop fully occupied with Foreign Affairs, his only other choice would have been to handball the role to one of the blokes. He tried to make a virtue of necessity by embracing the role himself.

Nonetheless, it might just work out to his advantage and ours if he takes the role on seriously and it isn't just window dressing. In the Hawke-Keating government, and in the early years of the Howard government, the Office for the Status of Women was located in the Prime Minister's department and had an important role in the cabinet decision-making process.

Its role was to review all submissions going to cabinet, and to draw attention to the impacts of policy decisions on women. Often issues with superannuation, tax, welfare payments, the organisation of aged care and childcare have a different impact on women to men, and the office's role was to ensure that a decision-making process dominated by men did give some thought to women's perspective.

If Abbott adopts that process again, it might just save his heavily male-dominated government from inadvertently running roughshod over the interests of 51 per cent of the population. It might work as a safeguard for him and for the wider community.

It is also a sign of progress, that the role of women is now so politically heated that Abbott doesn't consider it an issue he can ignore. When the Howard government came to power, the Office for the Status of Women was slowly eroded and eventually completely sidelined. It also systematically defunded community organisations advocating women's issues. And perhaps most importantly, it disbanded the units that collected statistics on women's advancement or lack of it.

The Coalition's current ''hide the boats'' strategy isn't new; it has form in knowing how to silence issues from the public agenda.

However, Tony Abbott is not John Howard and there is a difference between ''not getting it'' and malice. Abbott claims he has come a long way on these issues, and that may be true; the proof will be in his actions.

It is pretty clear that Abbott still ''doesn't get it''. His response to his sexist gaffes in the election campaign - that he ''didn't realise [he] had said anything that could be remarked upon'' - was telling. The gap between his obliviousness and the reactions of the young women around him (including his daughters) highlights that he doesn't understand the invisible social dynamics at work.

It is less clear whether Abbott still sees himself as the warrior for the traditional gender hierarchy that he has been in the past. He has had good reason to conceal the depths of his conservatism as he has tried to broaden his appeal in the lead-up to the election. He also has a track record of pursuing unpalatable right-wing policies on the quiet. When he was health minister his policy of only funding anti-choice pregnancy counselling services was in place for years before it was uncovered.

Nonetheless, he also appears capable of reflection and evolution. Despite his ongoing support for the party line on gay marriage, there have been some indications that his personal experience of his sister coming out as a lesbian has shifted his privately held view.

It is possible that Abbott's intentions have changed, and that in his words he has ''grown'' on gender issues as well. Having daughters come of age does change some men. Understanding their daughters' intelligence and ambition, and investing in their aspirations, can create a different insight into the female perspective. Watching talented daughters being shut out by the boys' club does agitate some fathers on issues they never thought about before.

If Abbott is being genuine in suggesting that has been the case for him, his role as Minister for Women presents an enormous opportunity. The best way to overcome ''not getting it'' is to be immersed in the issues. When it comes to understanding forms of social power you have never been subject to, you do need people to explain it to you.

Social power is notorious for being invisible to those who benefit from it, at the same time as it is broadcast at full volume to the people who are victims of it.

Whether or not Abbott ever really understands that will depend, ultimately, on whether or not he is curious about the gap between his and his daughters' understanding of the ''sex appeal'' gaffe.