The Australian Defence Force has largely been missing in action on climate change and its broader implications for national security, writes Michael D. Thomas. 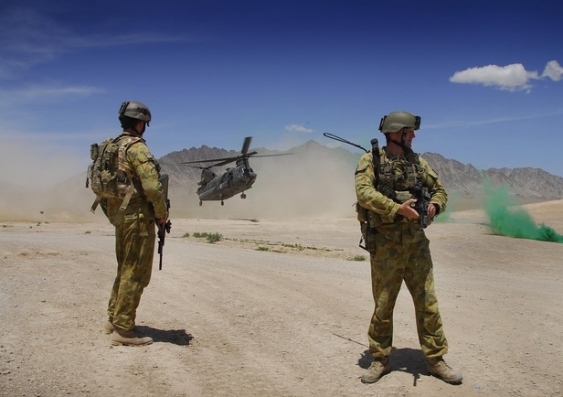 Climate change will affect defence personnel themselves, as well as the kind of situations they find themselves deployed in. AAP Image/Australian Department of Defence, Corporal Ricky Fuller

OPINION: Will the government’s forthcoming Defence White Paper discuss the national security implications of climate change? A report released this week by the Centre for Policy Development think tank urged the government to “manage the risks prudently”, while also acknowledging that “the parliamentary discussion on climate change increasingly resembles trench warfare”.

My research indicates that these bitter political divisions have, since 2010, stymied the Australian Defence Force’s response to the issue. Although there have been pockets of activity, a renewable program here or the use of some biofuels there, the ADF has largely been missing in action on climate change and its broader implications for national security.

This has not been the case elsewhere. Take the United States, for instance. Facing an equally (if not more) polarised body politic and a tight fiscal environment, the US military and national security establishment has nevertheless been leading the way on climate security.

Beginning in 2008, the United States published a series of reports on the national security impact of climate change. The United Kingdom, the European Union and NATO have all produced similar reports, but Australia’s relevant agency, the Office of National Assessments, remains bound up in bureaucracy.

This could leave the ADF under-prepared for the risks posed by climate change, with resulting risks to national security. But on a more immediate level, the political controversy has muted the ADF’s voice on the issue, diminishing its capacity to inject useful strategic contributions into broader national debates.

This is a shame, and Australia’s loss. There is an urgent need for leadership on climate change, and the ADF could lend a timely and authoritative voice.

The ADF and climate change

We can broadly divide the climate risks to national security into two areas. The first category is direct risks to the ADF’s capabilities – its personnel, training, support systems, supply lines, facilities and command structures. These include effects of sea-level rise or flooding on bases or training areas; health impacts from heat stress or disease; and increased direct exposure to natural disasters. US military strategists call these effects “burden multipliers”, because they add to the burden on military resources.

The second category is much broader, more complex and much harder to plan for. These are “geo-strategic” risks, involving issues such as the rate and severity of natural disasters (think humanitarian aid and disaster-relief missions); increased refugee flows; conflicts over water or other resources; and even major global “tipping points” such as polar ice-sheet collapse. In US strategic parlance, these are “threat multipliers”, because they add to the threats that military resources will be called upon to confront.

These changing risks pose serious questions. What force design best meets tomorrow’s threats? What capabilities will be needed? Get it wrong and you end up with an expensive, unprepared and demoralised defence force, which puts the nation at risk.

This is a sensitive area and one in which governments and defence planners are loath to tinker. Typically, changes to defence forces are made incrementally, over years of detailed geo-strategic analysis. But failing to address climate risks in the white paper would be a huge oversight.

If the forthcoming white paper fails to take account of climate threats, it will be the first since John Howard’s some 15 years ago not to address the issue. That would also underscore major differences with the United States, which in its 2015 National Security Strategy declared climate change an “urgent and growing national security threat” and one of its “top strategic risks”. President Barack Obama last month said that climate “constitutes a serious threat to global security; an immediate risk to our national security”.

Regardless of the white paper’s strengths or failings on the issue, we should look for opportunities (outside the white paper process if necessary) for the ADF to make a difference.

The ADF needs to be selective, strategic and incremental in its response to climate change, and to extend its presence in the national debate. The trick will be to do this in a manner that is acceptable to both sides of politics. Such entreaties need not be brash; they should be subtle but deliberate.

Here are three simple ways that the ADF could “act” on climate change in a non-political but influential way:

This person could act as a spokesperson and oversee the development of an ADF climate strategy. They should be someone senior (minimum of a one-star rank) and not necessarily a technical expert, and could in time also focus on strengthening regional relationships across the Asia-Pacific on climate security matters.

As in the United States, such a document could be a way of letting the public know that the ADF is developing a sound and effective strategic response to the “preparedness” risks described above.

In undertaking any of these steps, the ADF should focus on the scientific evidence and take pains to make it clear that it is acting in the national interest. It should avoid the perception it is “empire-building” or entering the debate out of self-interest. Rather, the strategic intent would be to open up discussion and progressively move the debate beyond those of recent years.

By mainstreaming climate change in the ADF, it may also offer an acceptable platform to those disaffected conservatives looking for a tangible way to act on the reality of climate change. Ultimately, framing climate change as a national security issue might even help it become a bipartisan issue – not to mention an essential consideration in future white papers.

Michael D. Thomas is undertaking doctoral research on climate security in the US and Australian militaries at UNSW Canberra.