To conclude that incidents of hazing and sexual harrassment merely indicate the presence of bad men is to misunderstand our highly gendered workplaces, writes Dean Laplonge. 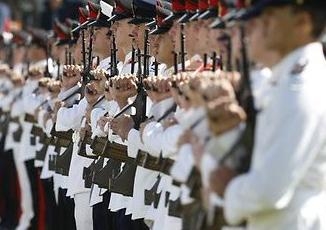 OPINION: Hazing and sexual harassment are not uncommon in highly masculinised environments. We have recent evidence that both of these occur in the Australian Defence Forces. They have been carried out by men. But to conclude that such incidents merely indicate the presence of bad men is to misunderstand our highly gendered workplaces.

When we think of how we understand "gender" in the workplace, it's easily associated with women. We talk about a glass ceiling for women, numbers of women in senior management positions, opportunities for women, and the need to protect women from sexual harassment when at work.

Common solutions to problems of gender at work rely on an assumption that we need to provide more assistance to women. In this kind of work, we rightly aim to correct an unacceptable imbalance which still sees more men than women enjoying successful careers.

These are all important issues. But when we focus only on women as the solution to gender in our workplaces, we reaffirm our belief that women are innately weak and incapable of doing things without help. This is a very paternalistic approach. It assumes that even after decades of trying, women still lack what it takes to be successful at work.

The fact is that most workplaces are inherently gendered. And many are geared towards supporting practices of masculinity which men, more so than women, are likely to want to and be able to emulate. We quite wrongly assume that the many men who are successful and comfortable in the workplace achieve this position without any assistance from the workplace culture at all.

So, instead of thinking about poor women and bad men, we need to investigate how assumptions about what it means to be a "real man" heavily influence our workplace cultures. We need to explore how group and organisational cultures promote particular ways of being a man which might be harmful to others.

Hazing is one of many forms of initiation that go on in male-dominated workplaces. Men are not naturally attracted to the practice of hazing. But hazing is a practice of masculinity which often allows men to claim their status as "real men" in a group.

Other initiation practices commonly found in male-dominated environments include assault, ribbing, getting a first injury on the job, and an ability to be bullied without complaint. The man who fails to survive these is at risk of being labelled a "pussy", "princess", "faggot" or "girl" - all of which signify not being a real man.

Initiation practices like hazing are incredibly complex. They are wrapped up with so many of our cultural ideas about sex, gender, sexuality and identity. This is why it doesn't make sense to try and root out the "bad men" who participate in such activities and believe that by ridding ourselves of these men we rid ourselves of the problem of gender.

Gender is not about men just as it is not about women. It's about what we are expected or encouraged or driven to do, in order that we can be seen as real men or as real women. What these particular men are doing is simply acting out their gender in ways which the wider culture, the workplace culture and their fellow crew members may support.

Gender is not an individual issue; it's a workplace issue. That's why we need to ask far more complex questions to help us understand and respond to issues of gender at work. What is it about the cultures of our workplace that encourage people to think this kind of behaviour is acceptable? And how do workplaces expect people to behave as men or as women, in both formal and importantly informal contexts?

This doesn't excuse the behaviour of the men involved in these initiation practices. But by exploring the culture, we have a much better chance of understanding why they occur.

In the case of hazing, we need to consider what makes a group of men think this is acceptable behaviour. What do they gain in terms of status or manhood in carrying it out on others? And how does the culture of their workplace suggest to them that this kind of behaviour might be what it wants from its men?

Dean Laplonge is the director of Factive, a cultural research consultancy which explores the impacts of cultural issues on workplaces. He is also an Adjunct Senior Lecturer at UNSW's Journalism and Media Research Centre.

What Game of Thrones teaches us about gender, power and international relations