Opinion A question of ethics: journalists and climate change

When it comes to reporting the projected consequences of climate change, are journalists following their conscience or are they letting us, and future generations, down, asks Tim Dean. 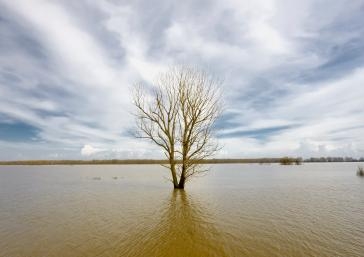 OPINION: Breaking news: scientists have discovered a comet that will collide with Earth in 30 years. Its impact will be devastating, killing millions, flooding coastal cities and disrupting civilisation as we know it.

Models predict the impact will cost the global economy at least US$4.8 trillion every year and maybe much more. This is around 5% of our global GDP, or more than three times Australia’s total GDP. Economists say the impact would trigger a massive global recession.

The announcement came from leading scientists working as a part of a United Nations team formed to assess just such an eventuality. They agree the probability of impact is 95%.

Preventing the impact will cost around US$1.7 trillion per year if the world acts immediately, with the cost rising with each year of inaction.

The above is, of course, hypothetical (don’t go stockpiling canned goods quite yet). But imagine if such an announcement were made today by leading scientists from around the world.

One can easily imagine that such a story would be embraced by the media. After all, disaster sells.

Yet – and I’m sure you can see where I’m going with this – a similar catastrophe faces us today: climate change. In fact, the figures and projections cited above come from a number of leading reports on the likely impacts of climate change, including the IPCC and Stern reports. And yet the media appears to render climate change in a very different light to the comet scenario.

Rather than covering climate change as a very real, and very probable catastrophe, much of the discussion in the media still revolves around debates over its very existence.

And the stagnant debate about the most appropriate response to climate change overshadows the fact that every year that passes is another that makes action more costly and more difficult. Yet the media emphasises the debate rather than the calamity of inaction.

Overall, there appears to be a lack of urgency in much climate change reporting, perhaps fuelled by editors wary of being branded “alarmist,” even if the likely impacts of climate change are, indeed, alarming.

So if climate change really does loom – and the smartest and most informed people on the planet say there’s a 95% chance it does – is the media failing us when it comes to reporting it? At least one prominent journalist thinks it is.

Wen Stephenson, a former editor at the Boston Globe, The Atlantic and senior producer on National Public Radio in the US, specifically thinks the media has failed in its moral duty to mobilise action against an existential threat to civilisation as we know it, and he has written a lengthy essay to his fellow journalists saying just that.

As he states: “as I dove into the subject in 2010 and 2011, going deep in a way that time-pressed editors and producers rarely do, I felt an overriding responsibility – especially in light of my own lackluster record covering climate – to engage.” Yet he found resistance when he implored his editors to inject more urgency into climate change reporting.

He sees typical climate change reporting as being “the product of a mindset in which climate change is simply another environmental problem, albeit a particularly complex one for which we’ll eventually find a technical fix, mainly by doing more or less the same things we’re doing now, only more efficiently and with better technology. It’s nothing to get too excited about.”

And in response, he issues a call to arms to his fellow journalists to change their ways:

It’s time to end the self-censorship and get over the idea that journalists are somehow above the fray. You’re not above the fray. If you’re a human being, you’re in the fray whether you like it or not – because on this one, we really are all in it together. And by downplaying or ignoring the severity of the climate crisis – or by simply failing to understand it – you’re abdicating your responsibility to your fellow human beings.

Most people would readily agree that the media has some moral obligations, such as to report facts without distortion, to avoid the manipulation of information by those in power and to seek to expose the truth rather than spout fiction.

But these are commitments about how the media reports, not on what it should report. They just say that journalism should be done well. As such, any claims that the media is obliged to report on a subject tend to be deeply problematic. Who is to decide what is worthy of reporting? And in what proportion? How should it be enforced?

So if the media doesn’t have a moral obligation to report climate change, what about individual journalists? Journalists, being human beings, have moral obligations like anyone else. A journalist who learns a bomb will be detonated in a few hours time might be obliged to do everything in their power to warn the public (and the authorities) of that bomb, if doing so is likely to save lives.

And if they don’t, perhaps they could be indirectly culpable for the deaths that would have been avoided had they acted.

However, journalists do have a conscience (even though some people may beg to differ). And one might expect journalists to act on their conscience, even if they cannot be forced to do so. This seems to be the real crux of Stephenson’s argument. While his language suggests a moral obligation to report climate change in a more vigorous manner, it’s really an appeal to journalists to follow their conscience. He’s not really forcing them to report it, he’s trying to convince them to have their conscience trump reservations about appearing biased or alarmist.

Thus Stephenson’s argument seems to be that journalists should use their power to inform and rally the public, mobilising action to mitigate the worst effects of climate change. And when they’re concerned that those with ideological or vested interests oppose action on climate change, they should work to reveal those voices for what they are and let the public decide.

The problem is, one might equally state that other journalists who care about a mass conspiracy of scientists, and the looming crippling of the global economy by Leftie socialist environmentalists, would be acting on their conscience by challenging climate science. Of course, if there is a moral commitment for journalists to respect facts delivered by experts, then this stance weakens considerably.

With the IPCC’s Fifth Assessment Report due out this week, one wonders how the media will treat it. Most outlets – even those sympathetic to the science – will likely report the findings alongside contrary voices, cited no matter their qualifications or ideological interests, all in the name of “balance.” And a vocal cadre of contrarian journalists will likely abandon balance entirely and actively work to discredit the entire endeavour.

When reading the coverage, try imagining it was talking about an imminent cometary impact with the exact same odds and projected consequences as climate change, and decide for yourself whether journalists are following their conscience or whether they’re letting us, and future generations, down.

Tim Dean is a PhD student in the Faculty of Arts and Social Sciences.