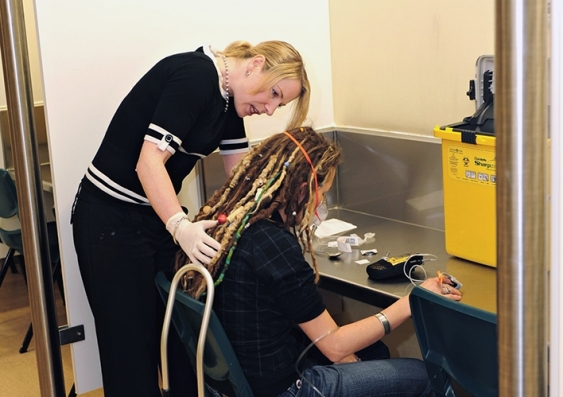 A nurse at the Medically Supervised Injecting Centre in Sydney checks on the welfare of a client. Photo: Uniting MSIC

A personalised approach to managing overdoses at Sydney’s only Medically Supervised Injecting Centre (MSIC) has ensured better outcomes to its clients’ long-term health, a study by UNSW Sydney and Western Sydney University criminologists has found.

And at the heart of the approach is treating people who use the MSIC facilities to inject drugs with respect and dignity, which ensures potential overdoses are managed more sensitively.

Dr George ‘Kev’ Dertadian is a social researcher with UNSW Law & Justice who has studied drug use among the marginalised as well as people from affluent backgrounds. He says the most recent study, published today in Contemporary Drug Problems, shows that the term ‘overdose’ has a more nuanced meaning among centre staff caring for people using the injecting rooms than the traditional view held by those working in a hospital emergency department.

“When we spoke to the staff who work at the MSIC, they talked about overdose as occurring on a spectrum of harm,” Dr Dertadian says.

“So they wouldn't wait, for instance, until someone ‘dropped’ – as in lost consciousness or went blue in the face, which is the normal way ambulance or hospital staff would respond or recognise overdose.”

In other words, the nurses at MSIC would use other cues to determine if one of their clients was in danger of overdosing well before the stage of losing consciousness.

“It’s a regular practice at MSIC for the staff to monitor their clients’ blood oxygen levels after they’ve injected,” Dr Dertadian says.

“But the staff also talked about things like, just knowing the client. So a client can behave in an uncharacteristic way that’s actually counterintuitive to the sort of medical and clinical approach to overdose, and they can intervene earlier.”

Read more: Injecting room has not only saved lives, it has protected clients from violence

Whereas we may generally associate overdose with pin-point pupils, drowsiness and unconsciousness, the staff who know their clients see the beginnings of overdoses in things like erratic behaviour, making jittery movements and unusual noises that they know are uncharacteristic of them.

“What this means is, clients aren’t left with low blood oxygen levels for a really long time before they get to the point of dropping, going blue and so forth. And that reduces all sorts of harm along the way, like acquired brain injury,” Dr Dertadian says.

A personalised approach to managing overdoses

Dr Dertadian isn’t suggesting that ambulance and hospital responses are inadequate, rather that the unique circumstances of the injecting centre allow for a more personalised approach, with medical care administered more gently.

“The unique circumstances of the injecting centre are that the nurses can sit with and monitor people after they've injected, but also it means they don't have to use Naloxone – typically used to reverse opioid overdoses.

“Sometimes, when it is used in hospital settings or when an ambulance is called, the person can be given quite a lot. It can violently jolt someone out of an overdose very abruptly and it can be very disruptive of their mental state and their physical presence.”

Dr Dertadian says in the cases where the MSIC staff do administer Naloxone, they give it in small amounts and progressively until the person regains consciousness, rather than giving a lot right away.

“But they rarely use Naloxone, they instead use oxygen which is often enough to reverse the effects of an overdose.” 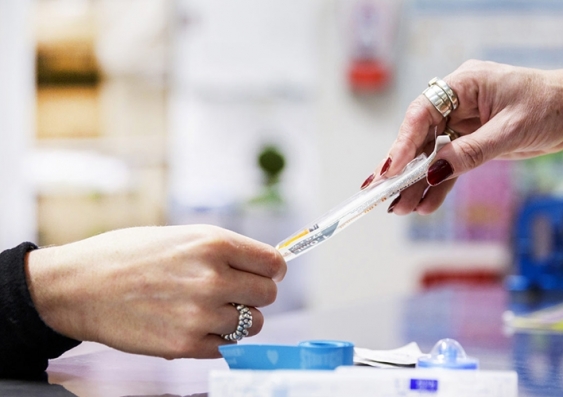 The unique circumstances of the injecting centre are that the nurses can sit with and monitor people after they've injected. Photo: Uniting MSIC

The politics of understanding people who inject drugs

The treatment for those who use the MSIC premises to inject drugs is centred on a system of care that recognises them as people rather than social outcasts.

“Intervening in an overdose earlier is all about paying attention to them, a kind of politics of understanding that this is a group of marginalised and criminalised people,” says Dr Dertadian.

“In a hospital setting, medical staff are much less aware of this – it’s just not part of the way they think about overdose in those settings.”

Sadly, the stigmatisation of people who inject drugs can also lead to mistrust of medical authorities.

Ultimately the study found that the politics of treating overdoses is about more than saving lives, says Dr Dertadian.

“It’s about making sure the clients using the injecting rooms live lives of dignity and respect.

“And as a health benefit, intervening early means those people have less chance of acquired brain injury, which means they’re less likely to get arrested later because they may be judged by police to be acting erratically.

“It also means they are more able to access services, as acquired brain injury can be a significant barrier to that,” he says.