City farming is growing worldwide as people try to reconnect with nature and ease concerns about food shortages. But there's a lot more to be done to make agriculture a viable feature of Australian life. 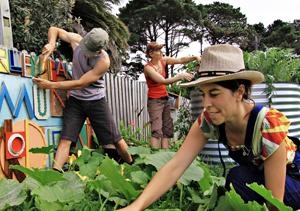 The rise of urban agriculture or “city farms” is a worldwide phenomenon, driven in the West by concern with health and environmental issues and with reversing the growing alienation of city dwellers with nature.

But necessity is also a factor. By 2050, it is estimated twice as many of us will be living in cities, and we all will need to be fed at increasing cost. Soaring grocery bills and the prospect of food shortages make attempts at self-sufficiency that much more urgent.

“We take it for granted that if we go into a shop or a restaurant, there’s going to be food waiting for us that’s magically come from somewhere,” says UK architect and food activist Carolyn Steel, who was a recent visitor to UNSW, as a guest of the Faculty of Built Environment.

“Food, which used to be the centre of the social core of the city, is now at the periphery,” Steel has said. “Buying and selling food used to be a social event, now it’s anonymous. We used to cook now we just add water. We don’t smell food to see if it’s OK to eat, we just read the date on the back of a packet.”

This has led to an imbalance in the way modern food is produced, Steel says. “It takes around ten calories to produce every calorie of food we consume in the West. But even though this food is being produced at great cost, we don’t value it ... over half the food produced annually in the US is thrown away. And at the end of it all, we aren’t even managing to feed the world properly ... a billion of us are obese while a further billion of us starve.”

But  UNSW researchers like UNSW Canberra geographer Dr Alec Thornton believe there’s scope for agriculture to thrive in Australian cities. "Australians have a lot of knowledge of growing food already and people are doing it, it’s just a case of favourable institutions, favourable policy, zoning choices and preserving green space.”

For the full story, read the latest issue of Uniken.

Watch the story at UNSWTV

You are where you live

Urban farming in Detroit: sowing seeds of hope in the motor city?