Opinion Same-sex marriage, like the movements that surround it, is nothing new

The history of marriage and same-sex relationships spans millennia, but the political manifestation of same sex marriage is a strictly modern concept, writes Denton Callander. 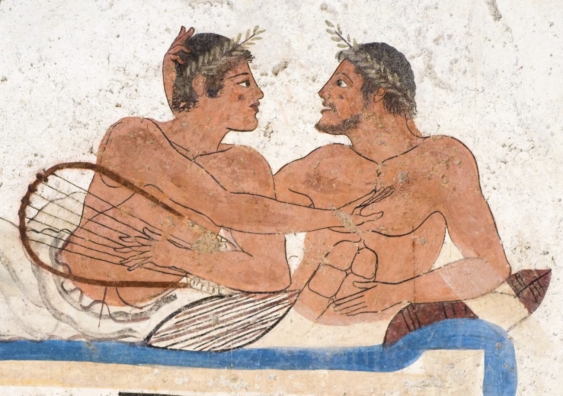 OPINION: Government backbencher Warren Entsch has introduced to parliament a private member’s bill to legalise same-sex marriage, despite there being little hope that it will pass.

The Coalition party room last week quashed the possibility of a parliamentary conscience vote on the issue, with Prime Minister Tony Abbott instead promising to put it to the Australian people via a plebiscite in future.

As the latest chapter in the push for same-sex marriage in Australia is written, it’s worth reflecting on how this movement has evolved over time.

Same-sex marriage as a ‘recent’ phenomenon

During a radio interview last week, Mr Abbott described same-sex marriage as “something which has only very recently come into our intellectual and cultural parameters, given that it’s really only this generation that has ever thought of this”. He went on to say that:

It has been our clear policy for more than a decade that marriage was between a man and a woman. And frankly, prior to that, it would never have occurred to anyone in our culture and civilisation that marriage was not between a man and a woman. I can remember my own university debates with gay friends and the idea that the gay community would in those days have wanted to embrace a bourgeois institution like marriage would have been unthinkable, but things change.

In the 1990s, an American scholar from Yale reviewed Christian texts from the 8th century regarding a series of union ceremonies, which included one to be carried out between two men.

In other work, analyses of stories and plays from the Ming dynasty in China found storylines with ceremonies representing marriage between both male and female same-sex couples. These narratives often included aspects associated with marriage of the time, such as seeking familial permission, negotiating dowries, and entering into legal contracts.

And among some First Nations people in North America, historical accounts reveal what was the normalcy of a man taking another man to fill the role of his wife.

These examples demonstrate the deep historical roots of same-sex relationship agreements. They are only a sample among many identified by modern scholars. In many cases, these agreements closely resemble other different sex marriage agreements of the time.

While scholars sometimes disagree over the specifics and interpretations of the ancient texts on which many of these studies are built, there does appear to be a general consensus that formal and informal same-sex relationships have existed in many different cultural contexts.

In context, however, it is clear Mr Abbott’s comments relate to Australian society over the last few decades. In many ways, although same-sex marriage and the movements that surround it are not entirely “new”, its place in modern politics is unlike anything seen before.

Heard in context, Mr Abbott’s statement is correct: for many Australians, same-sex marriage is a recent concept.

Mr Abbott also stated that the fight and desire for marriage rights among sexual minority groups is a recent phenomenon, suggesting that it was an idea rejected by his gay and lesbian peers at university. It is true that there have, and continue to be, many critiques of marriage from queer and feminist scholars.

These writings often question why sexual minority groups would pursue marriage, which theorists posit is used as a system of social control, “by imposing the norm of heterosexual monogamous marriage and condemning those who fail to adhere to it“.

Indeed, the issue of “gay marriage” has been characterised by some as largely conservative, driven (mainly) by the interests of white gay men of privilege.

These critiques aside, it is not true that an interest in same-sex marriage is “new” or terribly recent. In the United States, for example, marriage activism can be traced to a number of court cases in the 1970s, which saw same-sex couples sue the American government (unsuccessfully) for the right to marry.

Further, it is difficult to paint the political will of gay men, lesbian women, and other sexual minority groups with a single stroke. As explored by Robert Reynolds in his account of Australian (queer) sexual activism during the 1960s and 1970s, among some early liberationists, the aim was not necessarily to adhere to or dismantle existing relationship structures, including marriage, but instead to achieve, “the freedom to fashion themselves as they wanted".

While for some of that time this was clearly about challenging existing social structures, others took a decidedly more reformist approach that included formal recognition of same-sex relationships.

Strictly speaking, Mr Abbott’s recent comments misrepresent not only the cultural history of marriage and same-sex marriage, but also the history and discourse of queer movements in Australia and overseas.

But, in context, the Prime Minister was most likely thinking about a simple reality: for his parents and their parents, the question of “same-sex marriage” was not one that people asked and, indeed, not even part of society’s vernacular.

While same-sex marriage and the movements that surround it are not entirely “new”, the same cannot be said of its current political manifestation.

Denton Callander is a Research Fellow at the Kirby Institute of Infection and Immunity in Society and an Adjunct Lecturer with the Centre for Social Research in Health at UNSW.

How do we effectively teach sexual consent?