Opinion Selfie is not a dirty word

Selfies are blamed for encouraging everything from risky behaviour to rampant narcissism. But selfies can be potent acts of self-communication – and anyway, why is self-regard a bad thing, asks Roanna Gonsalves. 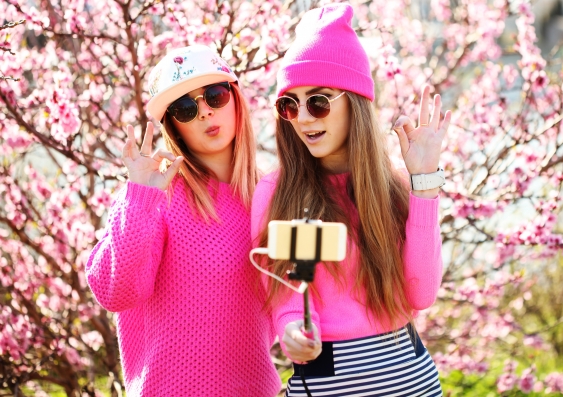 OPINION: Three years ago, on the 18th of November, 2013, the Oxford English Dictionary named the term “selfie” as their Word of the Year.

It was a term coined by an Australian, who took a photo of himself. He then posted it on an ABC online forum, saying, “Um, drunk at a mates 21st, I tripped ofer [sic] and landed lip first (with front teeth coming a very close second) on a set of steps. I had a hole about 1cm long right through my bottom lip. And sorry about the focus, it was a selfie”.

Today the term crops up with the regularity of death and taxes in news feeds across the world, and like death and taxes, it releases myriad conflicting contrails. Selfies have been blamed for ruining your relationships, your skin and photography itself. Oh, and of course, you might be a psychopath if you’re a selfie-posting man.

But selfie culture jams numerous urges together: the impulse to be noticed, to exert control over one’s own self-presentation, to bear witness, to reframe stereotypes, to celebrate.

Last week in Australia, Kevin Kwok took a video selfie in front of a bushfire in Kundabung, in northern NSW, documenting the danger he was in. Predictably, he was criticised for being a narcissist, for thinking of selfies rather than survival, in an echo of the selfies-as-pathological story we are accustomed to hearing these days.

In Lisbon, a selfie-taking tourist accidentally, if ironically, broke an 18th century statue of St. Michael, seen by Christians as the protector from evil. Earlier this year in Mumbai, the police enforced “no-selfie zones” to try and prevent selfie-related fatalities particularly in coastal areas with no handrails. We all know that it takes only a few microseconds for search engines to throw up selfies of pouting celebrities and mudbloods alike, in mid-twerk or mid-bicep-bulge.

Many would argue this is “a thirst for social media self-aggrandisement”. As the comedian Keith Lowell Jensen tweeted, “What Orwell failed to predict is that we’d buy the cameras ourselves, and that our biggest fear would be that nobody was watching”. We seem to be in an era where social media provides unparalleled opportunity for narcissistic practices.

Yet this is ultimately a facile, cynical, and privileged view. After all, the possibilities of various forms of social media are not so very different from other kinds of media of self-expression: think pen and paper, brush strokes on canvas, or even playlists on music streaming services such as Spotify and Apple Music.

According to communication scholars Theresa Senft and Nancy Baym from the Selfie Researchers Network, a selfie is,

a photographic object that initiates the transmission of human feeling in the form of a relationship … The selfie signifies a sense of human agency.

The real seduction of selfie culture lies in its potential to liberate: for those who have been the objects of the gaze of the privileged, to assume agency and fashion a gaze of their own choosing. One of the radical messages implicit in the Bible is that you have to love yourself first before you can love your neighbour.

This connection between self-love and the germination of empathy was taken up by Italian author Elena Ferrante in a recent interview. She argued that she’d never felt narcissism to be a sin (although it can be taken to extremes), saying,

The woman who practises surveillance on herself without letting herself be the object of surveillance is the great innovation of our times.

Selfie culture offers the means to write back: to empire, to heteronormative patriarchy, to whiteness, to all forms of privilege. The real power of the selfie is potent for those who have so far been unseen, or seen only through the representation of others. It is to say, as the photography theorist Paul Frosh says, “see me showing you me”.

Many of those who have been silenced before are saying loud and clear, “see me showing you me” in sometimes surprising, and sometimes ingenious ways. In India, some rape survivors have used Snapchat to take video selfies, using filters such as the dragon mask, which hide their faces but reveal their eyes and their courage.

These young women may not yet be able to show their faces because of legal issues, deeply entrenched societal prejudices and the real fear for their safety. But they are telling their own previously unheard stories of trauma to the world using a phone facing their own (even if masked) faces.

A young woman hiding her face with a Snapchat filter while talking about her experience of violence. Climb Against Sexual Assault/Facebook

The #creatingconsentculture activist Amber Amour live-blogged the aftermath of being raped, pushing back against victim-shaming and stigma with unapologetic selfies.

Numerous body-positive selfies on blogs and other social media platforms are contributing to the resistance against the unrealistic ideal of feminine beauty, what Naomi Wolf once famously termed “the beauty myth”.

Selfies of indigenous people in different parts of the globe, are a powerful statement about resisting erasure. A cursory web search using the term “indigenous selfie” reveals the diversity of First Nations communities across the world, united in their defiance of the continuing decimation of indigenous cultures.

Dalit History Month crosses genres and takes the selfie to a different, more collaborative, level. It is focused on the experiences of the historically oppressed and still violently abused Dalit communities in India. As a participatory radical history project working a lot with social media, it resists the usual study of Dalits without Dalits. A similar collaborative project in Australia is Indigenous X.

A 2013 study called Young people and sexting in Australia: Ethics, representation and the law, highlighted the diverse practices that are part of digital picture sharing culture, including private selfies, public selfies, and joke selfies.

In one of the papers that emerged out of this study, Selfies, Sexts, and Sneaky Hats, researcher Kath Albury draws our attention to “the broader cultural ambivalence and anxieties regarding sexed and gendered practices of self-representation”.

In light of this, we may ask why such ambivalence and anxiety exists. This is a question with roots so deep it will take a few lifetimes to excavate. However, considering this question does help us look past this legacy narrative of selfie-as-pathology.

It is a question that nicely illuminates the idea that the selfie, far from being a four (or six) letter word, is in fact not just a word at all. It is a whole other language, one that offers the unseen and unheard a spectacular way of writing back.

Roanna Gonsalves is a Lecturer in the Faculty of Arts and Social Sciences at UNSW.