The President of Ireland, Michael D. Higgins, has called on Australia to consider revisiting events of its past, such as the treatment of Indigenous Australians, in a way that recognises and includes the voices of people previously marginalised. 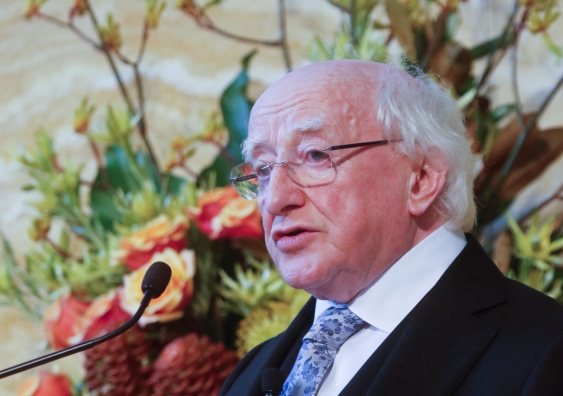 In a wide-ranging address delivered at UNSW Sydney today that also broached Ireland’s troubled history with Britain and the experience of the Irish in Australia, President Higgins said it should be remembered that “Australia was never, except in the ideological hubris of imperialism, a terra nullius”.

“The challenge of being open to revisiting anew some formative events of the past that we had, as it were, put on a shelf in our mind, is one that could best be expressed as a challenge we all face in all cultures and that includes both Ireland and Australia,” said President Higgins.

“There is nothing truly to be gained from amnesia, as comforting as it may be, and everything to be lost, for it is only by acknowledging, questioning, sometimes revising, but always remembering, in an ever more inclusive way, the events of our collective past that we can begin to build a collective future,” he said.

The UNSW address was part of President Higgins’ State Visit to Australia, the first State visit to Australia by an Irish president since Mary McAleese’s visit in 1998. It comes a month after Australian Governor-General Sir Peter Cosgrove visited Ireland, the first Australian governor-general to tour Ireland since Sir William Deane in 1999.

President Higgins, who took office in 2011, was the first Irish head of state to visit the UK where, in 2014, he addressed both houses of the UK Parliament.

A passionate political voice, a poet and writer, academic and statesman, human rights advocate, promoter of inclusive citizenship and champion of creativity within Irish society, President Higgins has previously served at almost every level of public life in Ireland, including as Ireland’s first Minister for Arts, Culture and the Gaeltacht.

Welcoming President Higgins to the University, UNSW President and Vice-Chancellor Professor Ian Jacobs noted he was welcoming a statesman who was also a strong human rights activist.

“Yours is a lifetime of service and commitment to making the world a much better place and we are honoured to have you here today,” said Professor Jacobs. 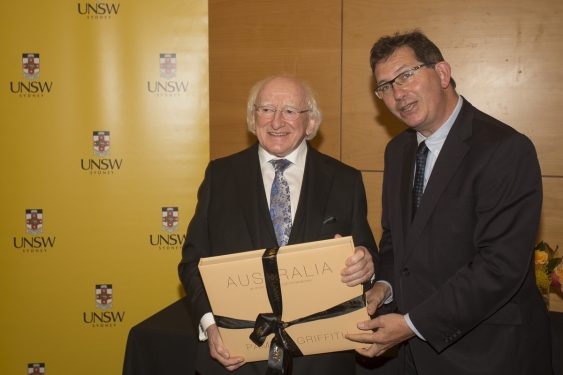 Professor Jacobs acknowleged UNSW’s strong relationship with Ireland and Irish studies, and the close bond between Australia and Ireland, a bond he said was worthy of being celebrated.

However, he added that it was important too to remember that often the migration of the Irish to Australia was born from economic and social hardships in Ireland and that the experience of some Irish upon arriving in Australia was not always a positive one and, “the hardships they endured are important to remember”.

“As important as it is to remember all the contracting and varied experiences that don’t often sit well with our preferred or romanticised versions of history,” he said.

During his term, President Higgins has been working on what he describes as a strategy for an ethic of remembrance, partly in response to the commemoration of the formative events that took place in Ireland between 1912 and 1922, such as the 1916 Easter Rising, the First World War and the Irish War of Independence and Civil War.

He said Ireland was seeking to restore to its national memory the 250,000 men and women from the South of Ireland who served in the British Forces in World War I, not to minimise any debate about the causes and consequences of that war but “to recognise the lives of those Irish soldiers lost, and those whose potential and promise were extinguished”.

The President said an even more difficult commemoration lay ahead for Ireland as it entered a centenary of the crucible of Irish history – the Irish Revolution, independence struggle and the Civil War.

“We must acknowledge the brutality of that struggle, the viciousness that was unleashed and the brutal tactics that were employed by both sides,” he told his Sydney audience.

Conscious of his role as President of Ireland during a time of intense public remembering he said the act of remembering should be placed in an ethical framework that included previously marginalised voices, that was open to the perspectives and stories of “the enemy of yesterday, however dissonant they may be”, and in a manner that critically evaluates often competing foundational myths and beliefs.

“Re-engaging with the past in such a fashion releases us from the trap of being moulded by past errors, their justification, or our fear of revisiting circumstances ... Our words matter and in our present circumstances when anger is the temper of our times we need to use our words for healing rather than wounding.”

For audio and video of President Higgins’ address go to www.president.ie

Breaking the silence: Australia must acknowledge a violent past