UNSW was the first university in the world to offer scholarships to help equip Sichuan's next generation with skills for rebuilding their province following last year's earthquake. 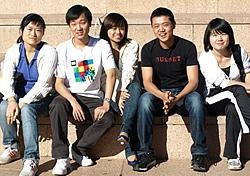 Sichuan student, Yu Lu, was in a fifth floor university classroom preparing for a test when his desk began to shake on May 12 last year. A few minutes later, with the entire building rocking, Lu and his friends hid under their desks. When the shaking didn't stop they finally fled.

Lu, 22, joined the millions of people of his home city of Chengdu, only 80 kilometres from the earthquake's epicentre, out in the open as the magnitude of the disaster became clear. At 8.0 on the Richter scale, the death toll across the Sichuan province would eventually reach over 68,000, with almost 400,000 people injured and 4.8 million homeless.

For the 60,000 students of Sichuan University, including Lu, that meant sleeping rough on the campus lawn in the rain that first night, then days in tents with rudimentary facilities.

Today, Lu and four other Sichuan University postgraduate students are studying at UNSW. The University was the first in the world to offer scholarships for 2009 to help equip Sichuan's next generation with skills for rebuilding their province and better managing future crises.

Zhang Xiaohan, 23, is studying Risk Management. As a volunteer at the local hospital following the earthquake, Xiaohan saw first hand a health system overwhelmed and unable to cope with the injured or even organise volunteers effectively.

"The earthquake happened so quickly, everything was in such a mess, it was as though there wasn't even enough air for all the people crowded into the hospital," she says.

"We need tools to prepare for disasters and build efficient systems which can cope," she says, of her hopes for her UNSW degree.

They are joined by Yuan Xin, 22, who is studying Design and Li Yue, 23, in Environmental Science.

"The scholarships are very good opportunity for us to study here then go back and help with the reconstruction," says Lu.