Opinion Singing, dancing politicians: don’t do it, unless you can

Like dancing and singing, humour is another means for pollies to connect with the people although, like explosives, it can be difficult to handle, writes Mark Rolfe. 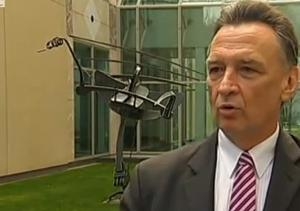 OPINION: It is a clear and incontrovertible case for the Deparment of Community Services and the public must immediately demand intervention. We cannot allow the suffering of the children to continue.

I am of course referring to the children of Craig Emerson who must live with the public humiliation of their father singing and dancing on national television. How can the department NOT intervene now on their behalf?

How could he do that to them? More importantly, how could it do that to us? If there is a competition for cringeworthiness, Emerson is in the premier league with Basil Fawlty and David Brent. His skit is just that painful to watch. He must have actually planned the interview. He had music prepared and he waits for it to start. He thought it was a good idea. The ABC journalist agreed with him, but I suspect for different reasons.

As you wait during the pause for the music to start and Emerson is standing there, you wonder what went through his head. Maybe it was the thoughts of a person preparing to bungy-jump, standing on the ledge and wondering “What the hell am I doing?”

Or maybe it was the thoughts of one of the many Oblivions of this world, people who glide through this life without a glance at those around them. In short, “this is a good idea”. See also a Turk and an American who each seemed to think that using a gun to shoot out a troublesome tooth was a good idea at the time. There is some aphorism about shooting your mouth off that is applicable to Emerson.

Singing and dancing politicians are not a pretty sight in Australia. If I want a guaranteed laugh from my young students, I need only run an episode of Labor In Power, the much-admired series on the Hawke and Keating years which has some less than admirable dancing at the party celebrating Keating’s 1993 win (see 4 minutes 20 seconds from the end of this). There we can see Labor luminaries Chris Schacht and Gareth Evans, among others, “cutting a rug” or “being groovy”; for the youngsters watching, who laugh like they’re watching their parents.

And I give my students no mercy by telling them of the horizontal folk-dancing of Evans and Cheryl Kernot. Again, it’s an image they try to scrub vigorously from their minds.

No wonder John Howard refused to hold a similar party when he won in 1996. Ostensibly he wanted to avoid public outrage at gloating but I reckon he wanted to avoid the public embarrassment of Peter Costello dancing in parliament or with Kerri-Anne.

Even Ruddbot had the presence of mind to be embarrassed when dancing the rumba with Kerri-Anne. Such are the things politicians do to gain popularity, if not notoriety, with voters.

There are no Australian politicians that you really want to hear singing, apart from Peter Garrett and even he stretches it for some. Bob Hawke did an interesting turn a couple of weeks ago belting out “Solidarity Forever” but that was OK because he was, well, Hawkie, the man who likes a party and a sing-song. That’s why we’re impressed that an 82 year old can skull a schooner at the cricket like a 22 year old. That clip got almost a million views. Top bloke. Two thumbs up. The old dog has still got it.

There are few politicians in the world who can sing. Putin tried with a rendition of Blueberry Hill but nobody was willing to boo him off the stage. Berlusconi sang but everybody expects that from an ex-cruise ship crooner and a renowned party boy who ran his country like a uni student let loose while his parents are away. John Ashcroft was the attorney-general in the Bush administration who caused many Americans to stare in pain at their shoes with Let The Eagle Soar. He’s up there with Emerson.

One politician who can sing is Barack Obama. He can open a speech with a couple of bars of a song before a room of New Yorkers. Or in Chicago he can outshine a room of celebrities including Mick Jagger, BB King and Buddy Guy with a few lines of the blues. Or he’s completely comfortable dancing with Ellen Degeneres on her show. And he knows how to do it without losing his dignity while making a favourable public impression.

That, after all, is the purpose to all these political attempts at music. That is why Bill Clinton slapped on the Ray-Bans and worked up the sax. As much as these latest attempts of politicians to ingratiate themselves can be understandably satirised, as in the movie American Dreamz, they must try every ways possible to show they are in touch with what ordinary voters do and think.

That is why politicians from Alfred Deakin to Robert Menzies to Bob Hawke to John Howard have played to the Australian passion for sports. That is why overseas politicians appear on satirical news programs to show they have a sense of humour and can laugh at themselves, something few Australian pollies are willing to endure. Like dancing and singing, humour is another means for pollies to connect with the people although, like explosives, it can be difficult to handle, as Emerson found out.

One of the difficulties with humour, as Emerson found, was in handling its aggressive side. It can be a weapon to attack opponents, through making an audience laugh at them. To successfully ridicule an opponent is to reduce their standing and increase one’s own before others.

That’s what Gough Whitlam achieved as opposition leader and prime minister. He dominated Harold Holt and later derided Billy Snedden with “I want to assure honourable gentlemen that the bodyguards they see accompanying the Leader of the Opposition are not to prevent other people shooting him but to prevent him from shooting himself”. Winston Churchill once quipped about the British Labour leader: “An empty taxi cab drew up at the House of Commons and Clement Attlee got out”.

In those days of public meetings, politicians were well practised at dealing with hecklers and, like stand-up comedians, if they couldn’t then they had to get off the stage.

Now they live in a much more controlled media environment. Which leads me to the question: I wonder if we need to run a telethon for the Emerson children to pay for years of therapy?