Supporting regional communities to respond to the increasing threat of climate-fuelled disasters has never been more vital. 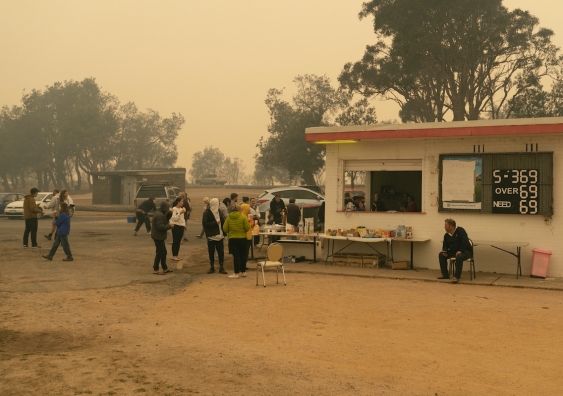 With heatwaves, bushfires, and floods, small towns and their surrounding communities have confronted a combination of successive disasters fuelled by climate change. And it’s predicted to only get worse.

“As the latest UN report warns, climate-fuelled disasters, especially those in Australia, are set to get worse,” says Professor David Sanderson, Judith Neilson Chair in Architecture at UNSW Arts, Design & Architecture, and Institute for Global Development Lead, who specialises in disaster risk reduction and response.

Prof. Sanderson says one of the biggest challenges of our time is helping regional areas manage disasters of increasing frequency and scale.

“So, the challenge for all of us, but particularly areas at increasing risk of climate-fuelled disasters, is to get ahead of what’s coming,” he says.

“We need to ask: what we can do to reduce or even prevent some of these disasters from happening?”

Prof. Sanderson says that among the most critical lessons from disaster response is the need to build resilience – otherwise known as the capacity of communities to survive, adapt and grow in the face of challenges, both expected and unimagined.

He says in regional communities, building resilience is about tailoring risk management solutions to community needs and local environmental conditions.

“This requires genuine engagement with people and listening to identify areas of need, and trusting local knowledge and experience to understand how we can further reduce risks,” says Prof. Sanderson.

Prof. Sanderson will draw upon humanitarian responses to large disasters nationally and internationally in a new two-year project that supports the Council and surrounding local communities in the Snowy Valleys towards developing more resilient towns.

This project, one of several funded by Resilience NSW, will help to build the resilience of small towns in the regions to fires, floods, and other emergencies by supporting community members, community sector organisations, businesses, and local councils to enhance disaster recovery, preparedness, mitigation, and prevention strategies.

Developing practical, community-owned measures will be the central focus and will include plans such as risk assessments, awareness-raising, participatory ‘action-planning’ workshops, scenario planning and business continuity planning.

Prof. Sanderson says the project is a shared endeavour, working closely with all members across local communities to identify what community-led resilience looks like.

“For resilience to work, it has to prioritise people,” Prof. Sanderson says. “So, the project is about developing locally-owned activities, whatever they may be, based on local knowledge and experience to help build that culture of resilience.”

“There’s a lot of good activity going on already – look at what people have already been through – so we will be plugging into what is already happening, working with local NGOs like Anglicare and others, and adding value where we can, in order to help integrate local knowledge and coordinate efforts.”

“We’re living in a WhatsApp and TikTok world where people in their teens engage in a very different way, so we need to understand that, listen to that, learn from that, and reach people on the platforms that they’re on,” Prof. Sanderson says.

Andrew Rae from Snowy Valleys Council says the project will help to streamline disaster-preparedness and response efforts across the community and build local initiatives.

“This project will take a ground-up approach to developing plans,” he says. “We want these plans to be developed and owned by our communities; it is the key to their success.”

Prof. Sanderson says resilience is a part of an evolving story around climate change, but it’s one that everybody needs to own.

“There is a rule in resilience that if you’re doing it alone, then you’re doing it wrong,” Prof. Sanderson says. “Everyone has a role to play, whether they’re four years old or 90.

“Humanity has risen to the challenge in the past, and there’s no reason why it can’t again.”

Hospitals are at risk of flooding as climate changes. We need evacuation plans