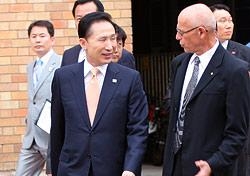 The President and his delegation were officially welcomed on campus by Vice-Chancellor Professor Fred Hilmer, who outlined UNSW's international credentials in a range of environmentally sustainable and renewable energies.

"We are honoured to have President Lee as a guest at the University," the Vice-Chancellor said. "This visit is high-level acknowledgement of our leadership position and we are keen to strengthen and deepen our connection to industry and education in Korea."

Dr Richard Corkish, Head of the School of Photovoltaic and Renewable Energy Engineering, led the President on a tour of the labs where the world's most efficient silicon solar cells are produced.

"Our research team is conscious that Korea is a rapidly emerging producer in this field and we are currently in discussions with Korean companies about new manufacturing technologies," he said.

The President arrived in Sydney ahead of a summit with Prime Minister Kevin Rudd to discuss cooperation in security, trade, economic matters and the environment.

He later told reporters that he hoped the two countries can work together in developing clean energies. "Korea and Australia are in a unique position to bridge the gap between developing and developed countries on climate change," President Lee said.

The Director of the Korea-Australasia Research Centre (KAREC) at UNSW, Dr Chung-Sok Suh, has been instrumental in building the level of engagement with Seoul over a number of years and helped secure the presidential visit.

"This was a very successful event," Dr Suh said. "With our leadership in two key areas on the President's agenda - clean technologies and Korean studies - it's appropriate that UNSW is the only Australian university to host the president on this visit."

What can we learn from Korean free trade deals?