While Senator Conroy's comments to Lieutenant-General Angus Campbell were offensive, what is more significant is the context that forced a distinguished military commander into a politically charged exchange in the first place, writes Gavin Mount. 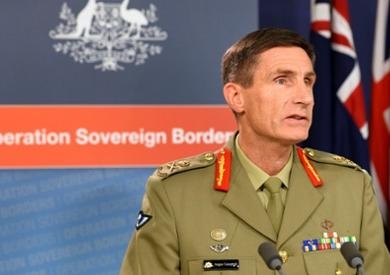 OPINION: Stephen Conroy’s outburst was offensive but it was not questioning the integrity of Angus Campbell.

Should military personnel be surprised or offended by such allegations, or are political matters fair game when a policy has placed a military commander in charge of a multi-agency operation and the exchange is occurring in a parliamentary context?

There are a number of fundamental principles guiding civil-military relations in liberal democracy at work here. Each  places responsibility and accountability firmly in the hands of the government of the day and processes of Parliamentary oversight.

One principle is the old Clausewitzian adage that "war is the continuation of policy by other means". Clausewitz warned that while military force was but one of the many instruments of power at the disposal of the state, any decision to use it must be rational and fully cognisant of the brutal realities of warfare.

Another principle is the liberal idea that there should be a  separation of military and civil powers. The military should stand apart from the political process to avoid real or perceived risk of creating a coup culture or military junta.

As they place their lives at risk and exercise a distinct responsibility for the legitimate use of lethal force, soldiers are also professionally beholden to a distinct military ethics.  When our political elite request the services of the military, they assume political responsibility for this burden and are obliged to justify their policies to the citizens that elected them to office.

Operational security is frequently cited in this case but must be evaluated in view of an overall political strategy. There is nothing new or untoward about a strategy to conceal operationally sensitive information in the normal conduct of strategic planning to deter and defeat a military opponent. Any suggestion or imputation of a military cover-up appears misplaced.

Political legitimacy of any campaign is an overarching strategic imperative. Sustaining a credible strategic narrative is a principal factor that determines the long-term success or failure of any decision to deploy military force to achieve a political end.  Rigid applications of operational security that deny media access have had a very poor track record in recent decades.

Leading authorities in contemporary strategic thought, such as David Kilcullen, Rupert Smith and Stanley McChrystal,  have argued that media denial approaches risk eroding political legitimacy at home and abroad.  Conroy’s dismissive comment about "not telling the Australian public the truth because you don’t want to offend an international neighbour" appears to profoundly undervalue both the nuances of electoral opinion and the diplomatic dynamics that are necessary to build legitimacy of this campaign.

The asylum-seeker issue has  become an entrenched feature in the Australian political landscape and military commanders have been brought directly into the political debate before. The most notable example is Air Marshal Angus Houston’s  dazzlingly clear account of all the operational facts in the 2002 Senate Select Committee  for an inquiry into a certain maritime incident to reveal just how politicised military operations had become. The report noted that ADF participation in that inquiry provided an opportunity to demonstrate  professionalism and integrity by ensuring "that the public record concerning ‘children overboard’ was corrected".

The  policy decision to place a single senior military commander in charge of multiple border protection services was devised by retired Major General Jim Molan for the Coalition well before polling day. The electorate had every opportunity to evaluate Operation Sovereign Borders and foresee that a military commander would be put directly in the political spotlight as he took charge of a multi-agency operation.

A parliamentary democracy is shining its light on a complex and concealed policy which has enshrouded senior military personnel in the centre of the political conversation that must, and should, be conducted around them. There should be no question of  Campbell’s deep and fundamental respect for democratic values and the rules-based international order that he has served so admirably. The government has asked the military and other agencies to conduct a difficult operation and placed their commander in a challenging and overtly political position. Elected representatives from all sides should not be emboldened to exploit this politicisation of our military personnel.

Conroy’s comments may have been impolite but the thrust of his questions was  not unexpected. More significant than the remarks of a boorish senator is the political context that forced a distinguished military commander into a politically charged exchange in the first place. A deeper and more confronting responsibility for this lies with the Australian electorate: the majority of which supported a party that devised Operation Sovereign Borders, the other near majority that supported a party that established the facility at Manus Island, and the rest, who failed to galvanise enough electoral support for a viable alternative.

We might all extend to Campbell, and those under his command, an apology; but we should never resile from our shared commitment to sustain a robust and frank democratic conversation about our interests, identity and values.

Dr Davin Mount is a lecturer in global politics and international humanitarian law at UNSW Canberra.