Anne Summers has used a UNSW speech to renew her call for a halt to the gender-based “hatred and vitriol” directed at Prime Minister Julia Gillard. 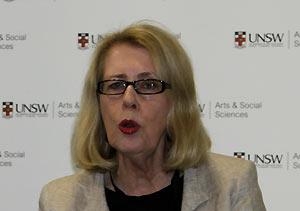 Journalist and social commentator, Dr Anne Summers, has used a public lecture at UNSW to renew her call for a halt to the gender-based “hatred and vitriol” directed at Prime Minister Julia Gillard by the Opposition and the public.

At the event hosted by the Faculty of Arts and Social Sciences, Dr Summers outlined the sexist and discriminatory treatment of Australia’s first female prime minister.

“What I want to establish is the extent to which the prime minister is being treated unfairly as a woman and because she’s a woman,” Dr Summers said.

Dr Summer's self-described “R-rated” lecture was accompanied by graphic images and sexualised caricatures of Gillard that have been circulated online and through parliamentary emails.

“There can be little doubt that these sexually explicit images of Julia Gillard by her abusive detractors are an act of bullying in the sense that they are solely designed to demean and diminish her, humiliate and intimidate her.”

Dr Summers highlighted the fact that the Prime Minister has been subjected to conduct that, were she working in the private sector, is outlawed under both the Sex Discrimination Act and Fair Work Australia.

“It is difficult not to conclude that we Australians are – so far at least – simply incapable of accepting a woman in charge of our country.

“If enough of us push back, perhaps we can stop it. And if we can, perhaps that will help restore some dignity and respect to the holder of our highest office,” she said.

Dr Summers’ speech was a version of her 2012 Human Rights and Social Justice Lecture. More than 72,000 people have viewed the speech since it was published on her website.

A former adviser to Labor prime minister Paul Keating, Dr Summers has worked as a senior journalist in Australia and the US.