Opinion Stopping online abuse isn't censorship: it's the least we can do

Cyber violence is a form of violence. This is because misogynist e-bile – alongside the racist and homophobic versions – can cause its targets actual harm and not mere offence, writes Emma Jane. 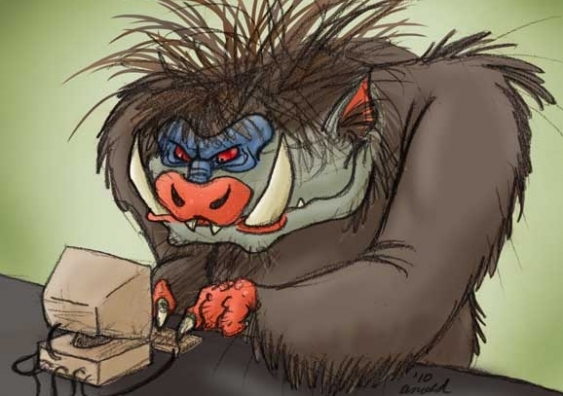 OPINION: "Your right to swing your fist ends where my face begins" sums up the libertarian position on where freedom of expression should stop and regulation should start.

Given the growing problem of the harassment and abuse of women online, this quote is in need of an update. Perhaps: "Your right to send unsolicited photos of your penis ends where my social media feed begins."

After so many waves of feminism, it is astounding that we must explain the basics of genital exposure etiquette to grown human men. Yet the notion that one really shouldn't share NSFW photos of one's private parts unless expressly invited is an aspect of modern internet usage with which many men seem to struggle.

While the sticky question of dick pic prevalence has yet to be included in any nation's census, anecdotal accounts abound. The LA-based artist Whitney Bell has received so many, she turned them into an art show.

After many years of lacklustre response, the long arm of the Australian law is finally extending to the cybersphere. Two men have recently been charged with – and pleaded guilty to – the superannuated-sounding charge of using a carriage service to menace, harass or cause offence.

One had posted graphic racist and sexist comments on the Facebook page of the former senator Nova Peris, while the other sprayed misogynist comments during the "slut shaming" of a Sydney woman over her profile on the hook-up app Tinder.

Given the libertarian claim that restricting free speech constitutes a greater evil than online rape and death threats, it's worth addressing a few common myths on the subject.

Myth 1: Misogyny online is no big deal because it affects only a few, high-profile women.

Wrong. While celebrities of all genders are certainly lightning rods for cyberhate, dodging e-bile is a daily routine for many "ordinary" female internet users.

In 2015, the United Nations released a report stating that 73 per cent of women and girls have been exposed to or have experienced some form of online violence, that women are 27 times more likely to be abused online than men, and that 61 per cent of online harassers are male.

Myth 2: Misogyny online is no big deal because it involves only the occasional nasty message.

Wrong again. While some women are stalked by lone weirdos, the internet's preferred attack MO is mob-style.

During the 2014 attacks on women dubbed "GamerGate", the games developer Zoe Quinn reportedly accumulated 16 gigabytes of abuse. Earlier this year, Jess Phillips, the British Labour MP who helped launch a campaign against misogynist bullying reported receiving600 rape threats over the course of a single evening.

Myth 3: Misogyny online is no big deal because it just involves run-of-the-mill rudeness and misunderstood jokes.

Nope. Actually, misogyny online is: "You sicken me u vile c---".

And: "sit on a butchers knife".

And: "Slut kill yourself."

And: "get a knife and shove it through your neck."

And: "You're a dirty waste of oxygen … Your a nothing. Your day is coming and I'll be laughing when it does."

They're just a fraction of the messages received by the writer Clementine Ford who re-posted a rancid bouquet of e-bile on her blog last year.

As with drowned lady "jokes", the normalisation of gendered cyberhate both reflects and contributes to the broader pandemic of violence against women and girls.

Cyber violence is a form of violence. This is because misogynist e-bile – alongside the racist and homophobic versions – can cause its targets actual harm and not mere offence.

Increasingly, it's also spilling offline. After years of online abuse, the writer Van Badham last year received a package at her home address depicting gang rapes and female genital mutilation. This was underlined by: "the greatest of all threats… I know where you live."

In short, the claim that online speech should never be regulated simply does not wash.

Even John Stuart Mill – the pin-up philosopher for freedom of expressionistas – was hysterical enough to acknowledge that expression should never be entirely free but curbed if it had the ability to cause others harm.

Arresting those who send particularly abusive and credibly threatening material online is not some insidious form of Orwellian censorship. It is the least the authorities can do and anyone serious about maximising speech opportunities on the internet should hope they do it some more.

And on that note: ovaries and out.

Dr Emma Jane is a senior research fellow at UNSW.