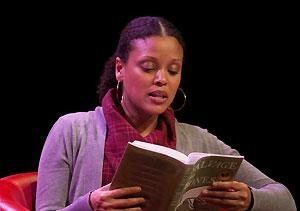 The author told the UNSWriting audience how her experience of the hurricane in her hometown of DeLisle, Mississippi, provided the framework for her novel.

“My grandmother’s house flooded very quickly, my family and I had to huddle in a field,” said Ward. “We were totally exposed to the hurricane.”

The event traumatised the author so much she didn’t write for more than two years.

“It ripped away the natural landscape of my home, and then my community, when people started to move away. It silenced me – then I realised I had to recreate my sense of home and regain some hope,” said Ward.

Salvage the Bones is set in the twelve days before a massive hurricane hits a coastal town in Mississippi. It follows the brutal realities of rural poverty in the American South through the eyes of Esch, its 14-year-old female protagonist, the only female growing up in a family of men.

Ward, whose writing has been described as both, “lyrical and savage”, says teaching creative writing at the University of South Alabama has taught her not to “sugar-coat” the way she depicts her characters.

“My students write raw, true stories and reading them revealed a defect in my own writing,” she said. “My students, and Hurricane Katrina, have taught me that I can’t be a benevolent God with my characters because life doesn’t spare anyone.”

Ward is currently writing a memoir about the deaths of five young men, including her own brother, in her small Mississippi community, due to be released late next year.

The Faculty of Arts and Social Sciences (FASS) initiated the first university partnership with the Festival in 2010. Various UNSW academics are panellists at the Sydney Writers’ Festival this week. See the full list here.

UNSWriting fosters partnerships with publishers, the Sydney Writer’s Festival and other bodies to promote good writing and innovative ideas.