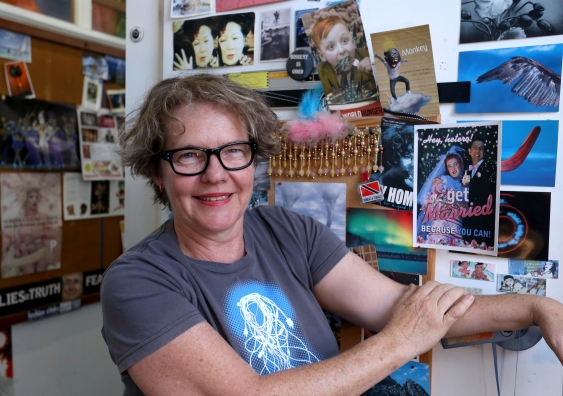 One film is the story of a Jewish father’s ‘secret’ life and the family he never spoke of after fleeing Nazi Germany. The other weaves together footage secretly shot on a mobile phone by a Manus Island detainee that chronicles daily life for asylum seekers.

Both, premiering at the Sydney Film Festival, are stories of forced migration, of the myriad ways that people deal with the trauma it can cause, and how its effects can ripple through generations.

UNSW’s Su Goldfish, writer and director of The Last Goldfish, and Iranian-Dutch director Arash Kamali Sarvestani, co-director of Chauka, Please Tell Us the Time, will discuss their films at a panel event on 13 June as part of the Festival. Behrouz Boochani, the Iranian detainee who shot the Manus Island footage, is expected to join via audio link. They will be in conversation with Stephanie Hemelryk Donald, Professor of Comparative Film and Cultural Studies at UNSW and ARC Professorial Future Fellow.

After a sold-out Festival screening on 8 June, The Last Goldfish has had an extra session added on 20 June at Dendy Newtown. The film is in the running for the Documentary Australia Foundation Award for Australian Documentary.

It tells the story of how Goldfish, manager of the Creative Practice Lab in the School of the Arts & Media, discovered the truth about her father’s past: that he was Jewish, that before she was born he had been married to another woman with whom he had two other children, and that they had all fled the terrors of Nazi Germany to settle in the West Indies.

When the marriage dissolved and his ex-wife remarried and moved with her family to another country, Manfred met his second wife Phyllis and along came Su.

“I was so excited after I got over the teenage fury of being excluded from this knowledge,” she says of her father’s revelations. “But he then lied about knowing where my half-siblings were and was very anxious about me making contact with them.”

Part of her film is an exploration of that anxiety, and the guilt that often comes with surviving trauma: “I think my father’s guilt meant he couldn’t talk about what happened to him,” Goldfish says.

Goldfish was born in Trinidad and enjoyed an idyllic childhood with her parents Manfred and Phyllis. But the Black Power Movement of 1970 and an attempted military coup prompted Manfred to move the family to Sydney when Goldfish was 14. 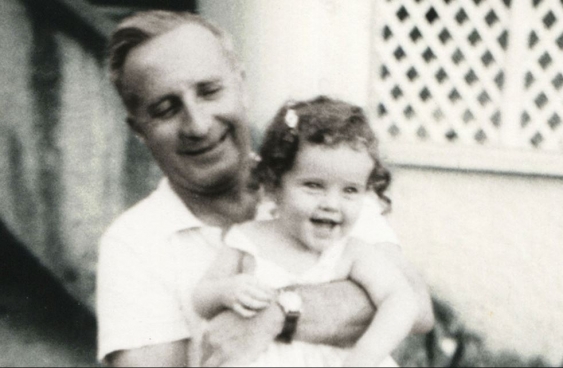 In her new home, a friend of Goldfish suggested that her surname sounded Jewish. When she asked her father “Are we Jewish?”, it was as if she had pulled a stray thread that caused the whole garment to slowly unravel.

Yes, he had been Jewish but he wasn’t anymore. Persistent probing loosened more threads. He had only just escaped the Nazis by fleeing to the West Indies. He had lost almost all his family in the concentration camps. He drew a family tree but insisted no one was left, telling his daughter “You are the last Goldfish”.

“Whenever I came close to getting anywhere, he would always shut down the conversation,” Goldfish says. “I think he thought if he said one thing, it opened the door to a thousand other questions.”

People who had been through deep trauma, she learned, either spoke about it a lot or didn’t talk about it at all.

The idea to make the film coalesced after Goldfish interviewed her father for a film assignment in 1996: “He took lots of photos and had all these home movies so I was asking him about that kind of personal documentation,” she says. “But what I was really after was the gap in the documentation. The photos went up to about 1937 then the home movies and photos from Trinidad start in the 1950s and there’s this gap in between.

“Showing him photos and talking about them drew out some of the stories and he told me things I’d never heard before that were terrible,” she says.

Goldfish eventually tracked down her half siblings and travelled to Canada to meet them. “I still felt there must be Goldfish family out there ... I thought I would keep going and track down everyone in that family tree.”

A breakthrough came when she was contacted by a researcher in Germany who was working on a book about Jews from the town of Ulm. This led her to the town of Bad Ems, where Manfred had been born and where his parents had run a Kosher hotel.

Goldfish travelled to Germany to find out what happened to the people on her family tree and look for her grandparents’ hotel.

“It turns into an amazing adventure. Some of it’s very sad but basically it’s a fantastic story,” she says. 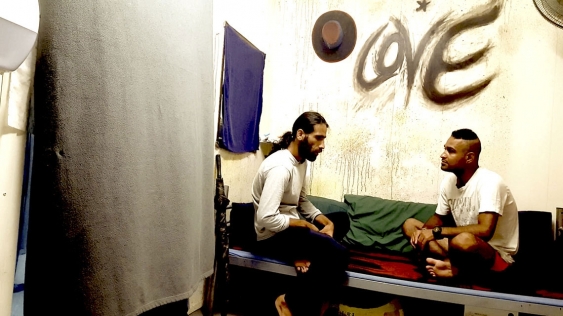 Behrouz Boochani, left, and an unidentified Manus Island detainee in a still from the documentary 'Chauka, Please Tell Us the Time'. Photo: Sydney Film Festival

For the panel event, she hopes to read some of her father’s writings about being interned in a work camp.

“It’s about all that uncertainty and being trapped in a place where you’re surrounded by barbed wire and the way people dealt with it. Some people killed themselves and some grew vegetables and some people survived OK and some were traumatised,” she says.

Dealing with internment is also at the heart of Chauka, Please Tell Us The Time, shot in secret by Behrouz Boochani on his mobile phone. The Kurdish journalist, who has been detained on Manus Island since 2013, used Whatsapp to send low-quality shots to Arash Kamali Sarvestani in The Netherlands, a process that often took hours.

The film’s name derives from the Chauka bird that sings at certain times of the day and allows locals to tell the time. Chauka is also is a section of the detention centre where people are held if they are deemed ‘non-compliant’.

The film captures the tedium of daily life in detention, the anxiety caused by solitary confinement and the psychological suffering when one has no control over their future.

Goldfish says: “If my film could do anything to help rescue Behrouz from being in such a terrible position where he doesn’t know what’s going to happen to him, it would make the whole process worth it. I’m trying to bring to it the hope that these things do pass, but these people must be freed.”

What: Meet the Directors – Stories of Refugees and Forced Migration