From the disillusioned middle class to fake news, a Sydney Writers' Festival panel discussed how inequality has come to be a mark of the Trump presidency. 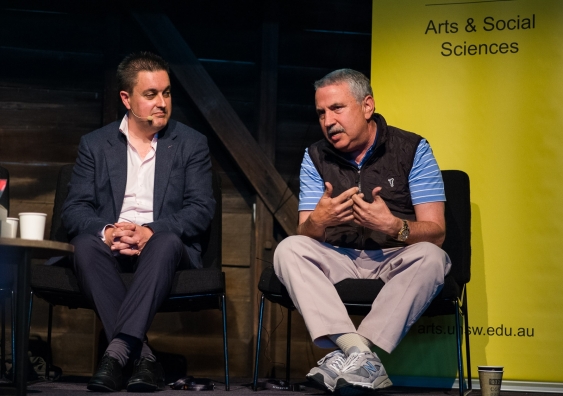 “Let’s talk about the Age of Trump, or as I like to call it, Armageddon.” This lightheaded jab at the Trump Administration by Lateline presenter Emma Alberici set the scene for ‘Globalisation and Inequality In the Age of Trump’, a panel discussion staged jointly by the Sydney Writers’ Festival and UNSW’s Grand Challenges program.

The ensuing panel conversation had a resounding sense of ‘how did we get here?’ with Donald Trump as the leader of the ‘free world’.

New York Times journalist Thomas Friedman believes a disillusioned middle class burdened by globalisation is responsible. Once upon a time, “if you were a white male in Minnesota in the 50s or 60s you really needed a plan to fail”, Friedman said. But these “glorious years of the middle class” came to an end with China’s influx into the market.

The so-called trickling down of wealth that capitalism was supposed to bring didn't happen. Instead, unemployment skyrocketed along with the discontent of the middle class. Now, in 2017, the world’s eight richest possessed the same wealth as the world’s poorest 3.6 billion people.

The testing times of the Trump presidency, and how globalisation launched the president to power, were acknowledged by Friedman and the panel of Washington Post columnist Sebastian Mallaby, ACTU President Ged Kearney, and UNSW Professor of Economics Richard Holden.

Friedman said he knew Trump from “the world of golf” and that the President claimed credit for his idea for the infamous wall designed to prevent immigrants from freely crossing into the US.

"Trump and I share a common belief that immigrants must exhibit American values,” Friedman said.

These words struck a chord with the older audience, with many grey-haired onlookers nodding in agreement. What Friedman says drove support for Trump might be described by some as xenophobia. For him, though, it was “people going into the grocery shop and people speaking languages they don’t understand, people wearing headscarves… people going into their offices and robots taking their jobs”.

Mallaby disputed this. He said immigration improved the wages and lifestyles of migrants while having a limited impact on citizens. The rhetoric of immigrants stealing the jobs, Mallaby said, wasn't substantiated by evidence.

He pointed to the United Kingdom as a golden example, which had a high level of immigration while outperforming many other economies. He said protectionist policies forefronted by Brexit were “misguided” and reject the natural notion of merging markets.

As well as policy-making being undermined by social media, politics had become tribalised in the US, with Congress looking more and more like American Idol than a legitimate political institution.

Restricting immigration was also disputed by Professor Holden, from UNSW's Business School and the co-lead of UNSW's Inequality Grand Challenge. He admitted Australia's planned changes to 457 visas had him “worrying” due to “amazing talent being under threat”. Pointing to the skill shortages in the technology sector, he said tighter restrictions on visas could be problematic for universities. These institutions had a great reliance on international talent pools to select the best and the brightest, he said.

From talk about inequality, politics and trade, the phenomenon of fake news emerged. Ged Kearney said that if you believed what was written about unions on social media, you’d think she’d have horns.

Friedman called fake news “an issue very close to my heart”. He reflected on how fragmentation in politics and the echo-chambers of social media propelled Trump into the presidency. He said that as well as policy-making being undermined by social media, politics had become tribalised in the US, with Congress looking more and more like American Idol than a legitimate political institution.

“Everyone’s got their own truth now, and a President who lies as he breathes,” Friedman said.

The conversation might have kicked off with a laugh but it finished with a meaningful anecdote. Friedman reflected on an interview he’d had with the Surgeon-General of the US, who was recently fired by Trump. He asked him what the most prevalent disease was. Was it heart attack? Was it cancer? Was it diabetes? The surgeon replied: “It’s none of those. It’s isolation.”

Left with that pithy anecdote, the audience exited the room. A woman turned to her friend on the way out of the theatre and remarked: “Isn’t that funny? In an age when we are the most connected that we’ve ever been, we’re also the most lonely.”

The government should pick towns, not industries, to fund

A solution for inequality lies in making business play nice