The TPP can't go ahead in any form, so its time the Australian government lets it go, writes Elizabeth Thurbon. 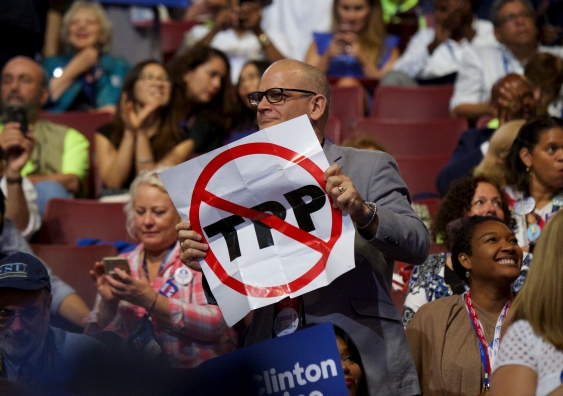 With all the debates on whether China will join the Trans Pacific Partnership (TPP) Agreement now that President Trump has officially rejected it, or if the TPP can exist as a 12 nations minus one agreement, you’d be forgiven for thinking it still could go ahead. It can’t.

The agreement itself states that to come into effect, six of the 12 original signatories must ratify the treaty, and together these six must represent 85% of the total GDP of all 12 original signatries. The US alone accounts for a massive 60% of this combined GDP. So US rejection is indeed a deal breaker.

What is surprising, on the other hand, is Prime Minister Malcolm Turnbull’s declaration that he will push ahead with the TPP’s implementing legislation in Australia, despite America’s withdrawal. So what is the sense in such a move?

Not surprisingly, domestic politics goes someway towards explaining Turnbull’s actions. The Turnbull-led government – like the Abbot-led one before it – has put trade agreements at the centre of its otherwise sparse economic policy agenda.

Upon signing the deal, the Liberal-National Coalition heralded the TPP as a landmark win that would deliver enormous economic opportunities to Australia (just as it claimed the Japanese, South Korea and Chinese deals before it would). Never mind that modelling showed only modest gains would flow from the TPP (and other deals) to quite a narrow set of Australian constituents. According to the World Bank, the TPP was expected to increase Australia’s GDP by only 0.7% by 2030.

And never mind that the government’s “big win” narrative ignored the obvious costs associated with these deals for Australians more generally, thanks to intellectual property and investor state dispute provisions. Putting facts aside, the government’s messaging was that the TPP was a massive win for Australia.

To now simply let the deal go without some major public hand-wringing would contradict this narrative. So even if the continued pursuit of the TPP is futile, the government can’t be seen to be letting go of its “crowning economic achievement” without a fight.

Beyond domestic politics, Turnbull has publicly argued that a key reason to still pass the TPP legislation is to send a signal to the world of Australia’s ongoing commitment to – and the importance of - “free trade” in the face of growing American protectionism. But the logic of this argument is flawed.

It assumes that the TPP embodies free trade ideals. It does not.

Like most of the trade agreements signed by Australia over the past decade or so, the TPP is only marginally about the “conventional” trade issue of expanding exports and imports through the removal of tariff and other barriers to trade. This is why economic modelling has estimated that only very modest gains will accrue to Australia from TPP-related export expansion over the next decade – despite the government touting the deal as a huge economic win for Australia.

In fact, the most significant and most controversial aspects of the TPP embody the opposite of “free trade” principles. Take the deal’s intellectual property (IP) provisions. These would further extend the monopoly rights (and rent-seeking behaviour) of large corporations through changes to patent and copyright laws, delaying competition and keeping the price of IP-protected goods (like pharmaceuticals) higher for longer.

Then there are the deal’s investor state dispute settlement (ISDS) provisions. These would give foreign companies the right (not afforded to local firms) to sue the Australian government for regulatory changes aimed at advancing important health, environmental and other social and economic goals.

In this brave new world, regulations to prevent profit shifting by multinational corporations or to mitigate climate change could be subject to legal action – and hefty fines imposed on the Australian government (read: Australian taxpayers). This is precisely the fate that befell the Canadian government and its citizens after it agreed to ISDS provisions in its trade deal with the United States.

In sum, the TPP is not principally – or even largely - about “free trade”. This is precisely why so many people across Australia and around the globe are opposed to it, and precisely why it is so disingenuous of the PM to brand all of its detractors as “anti-free traders” or “protectionists”.

Indeed, if Turnbull’s aim is to signal to the world Australia’s commitment to liberal principles and freer trade, then abandoning the TPP would be a sound first step.

Of course, there may be another reason for Turnbull’s continued pursuit of the TPP: to establish Australia (and Turnbull himself) as a key trade policy maker (rather than taker) in the region; to demonstrate to our regional friends that Australia is capable of leading an ambitious and expansive trade agenda, even in the absence of US sponsorship.

But if this is the aim, then surely it won’t be achieved by continuing to flog a deal so clearly and so closely associated with US corporate and geo-strategic interests (at least as they were understood by the Obama Adminstration).

America’s rejection of the TPP presents a unique opportunity for the Turnbull government: to acknowledge in the face of overwhelming global and local opposition that the international trade agenda has gone off track. If the government’s aim is to become a trade policy maker, not taker, in the region, then an incredible opportunity now exists to do so: by rejecting the TPP and and returning the goal of freer trade to the centre of our nation’s trade policy agenda.

The first step in doing so would be to reject once and for all provisions like ISDS and IP extension that enjoy so little support in this country and elsewhere and that would cost more than benefit the Australian public (not to mention our developing country neighbours for whom such provisions are even more economically and socially damaging). This would also require Australia to take a strong new stance in the negotiations of the China led trade deal, the Regional Comprehensive Economic Partnership, that like the TPP is also now pushing into areas like ISDS and IP extension.

The TPP was a bad deal for Australia (and the US) before Trump was elected – and it remains a bad deal today. But its failure presents an unprecedented opportunity for Australian policymakers to rethink and redefine the national and regional trade policy agenda – as well as chart a new direction for our international involvement - if they are brave enough to take it.

Why Trump is right, and wrong, about killing off the TPP