Opinion Three reasons why the Pope had to go

Dr Geoff Nathan outlines why Pope Benedict XVI saw it necessary to relinquish his title and reflects on the future direction of the Catholic Church. 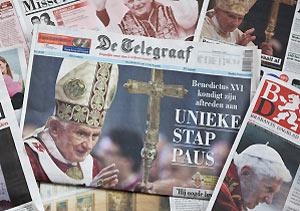 The last man to do so was Gregory XII in 1415, not entirely of his own choosing, when no fewer than three pontiffs all claimed to be the heir of St. Peter. Abdication - voluntary and otherwise - is nothing new for the papacy; we have examples going back almost 1700 years.

But Benedict’s decision is certainly novel in modern times. Predictably, the blogosphere and twittersphere have exploded in conspiracy theories (including the always present, but as of yet unrealised, end of the world), but their concerns and those of more staid commentators boil down to two questions: why did Benedict abdicate and what will happen now?

As to why, I would suggest three reasons.

First, as Benedict himself says, he is 85, and serving as the head of the Church and over 1.1 billion Catholics is becoming increasingly difficult. He probably wishes to avoid the experience of John-Paul II’s final years, where infirmities left the Pope physically and mentally inert. This is part vanity, but also part practical.  His ability to do the job has been compromised by age.

Second, both Benedict’s life and career have been decidedly mixed. His years before the priesthood are uncomfortably intermingled with the legacy of Nazi Germany. As a cardinal, he was one of John-Paul II’s strongest supporters in the movement towards a more socially and institutionally conservative Church.

While head of the Congregation for the Doctrine of Faith (until the twentieth century, the Roman Inquisition), he clamped down hard on liberation theology and calls for the ordination of women. And as Pope, he has been AWOL on the paedophilia scandals rocking Australia, North America and Europe—leaving it to rudderless archbishops to sort the matter out (witness the excruciating verbal contortions of Cardinal Pell). His past life and present controversies have not gone away.

Finally, there are a number of issues facing the Church that transcend Benedict’s pontificate, ones he is unable to take on. The move towards conservatism has come at a price: many of the clergy and laity in the developed world are disaffected, Church doctrine on social issues (including birth control, AIDS and homosexuality) has created regional and class rifts, and every year there are fewer and fewer recruits to the clergy.

His comments about the “dictatorship” of cultural relativism have made resolution of these tensions even stickier. And in many ways, Benedict’s election was an avoidance of these issues. Not only does he lack the wherewithal to tackle these problems; he arguably doesn’t have the mandate to do so.

So what next? The College of Cardinals is responsible for electing a new bishop of Rome. There are several strong candidates for the job, including a Canadian and two Africans. There has never been an Asian or New World Pope; the last African reigned in the 490s. Whatever his background, the College cannot continue to elect do-nothing pontiffs. Benedict’s successor will have to be as vigorous and principled as John-Paul II when he was elected in 1981.

It’s unclear which way the white smoke will blow, but I predict that the next Pope will be a staunch, youngish conservative (the wrong choice, in my opinion). Whoever is chosen, he may have to dust off some old papal names. Martin V succeeded the last Pope who retired and was notable for ending the Great Schism in the Church.  Maybe a Martin VI can do the same.

Dr Geoff Nathan is a lecturer in Roman History at UNSW, specialising in late antique and early medieval social history. He has previously lectured in ancient and medieval history at San Diego State University, Western Oregon University and UCLA. He is author of The Family in Late Antiquity: The Rise of Christianity and the Endurance of Tradition.

Why ‘legitimate’ rape and other myths are alive and dangerous